Creative Ideas That Worked in 2018, From Land O'Lakes to Billie 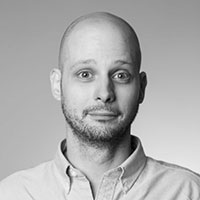 Two of my favorite ideas from 2018 proved that once again, simple is better. Sometimes all it takes is one letter.

Land O'Lakes looked to change the way people see their company, and they did it with one letter—the letter "s." As a farmer-owned co-op, the future of their company relies on the future of farming. But more than 100 years of popular culture has excluded half the country's population from considering the occupation. Every farm toy you've ever played with, movie you've ever seen, or song you've ever heard has portrayed the farmer as one type of person—a "he."

"She-I-O" was a simple way to flip the most iconic symbol of farming, Old MacDonald, on his head. It was a way for Land O'Lakes to use action to genuinely support a larger societal movement. And it instantly made current norms look incredibly old-fashioned. My mother recently got my 4-month-old daughter an Old MacDonald sing-a-long book. I politely asked her for the gift receipt.

Another idea that worked: IHOP, "IHOB"

IHOP also used one letter to change perceptions. When I saw that IHOP was changing its name to IHOB, I wasn't just dumbfounded, I was straight-up mad. I imagined a group of concerned executives sitting around a 40-foot conference table: "The data shows that millennials aren't embracing pancakes. However, there is some evidence that they do value the concept of breakfast. OK, simple. We need to diversify!" Hence, IHOP became IHOB—International House of Breakfast. Or so we assumed. 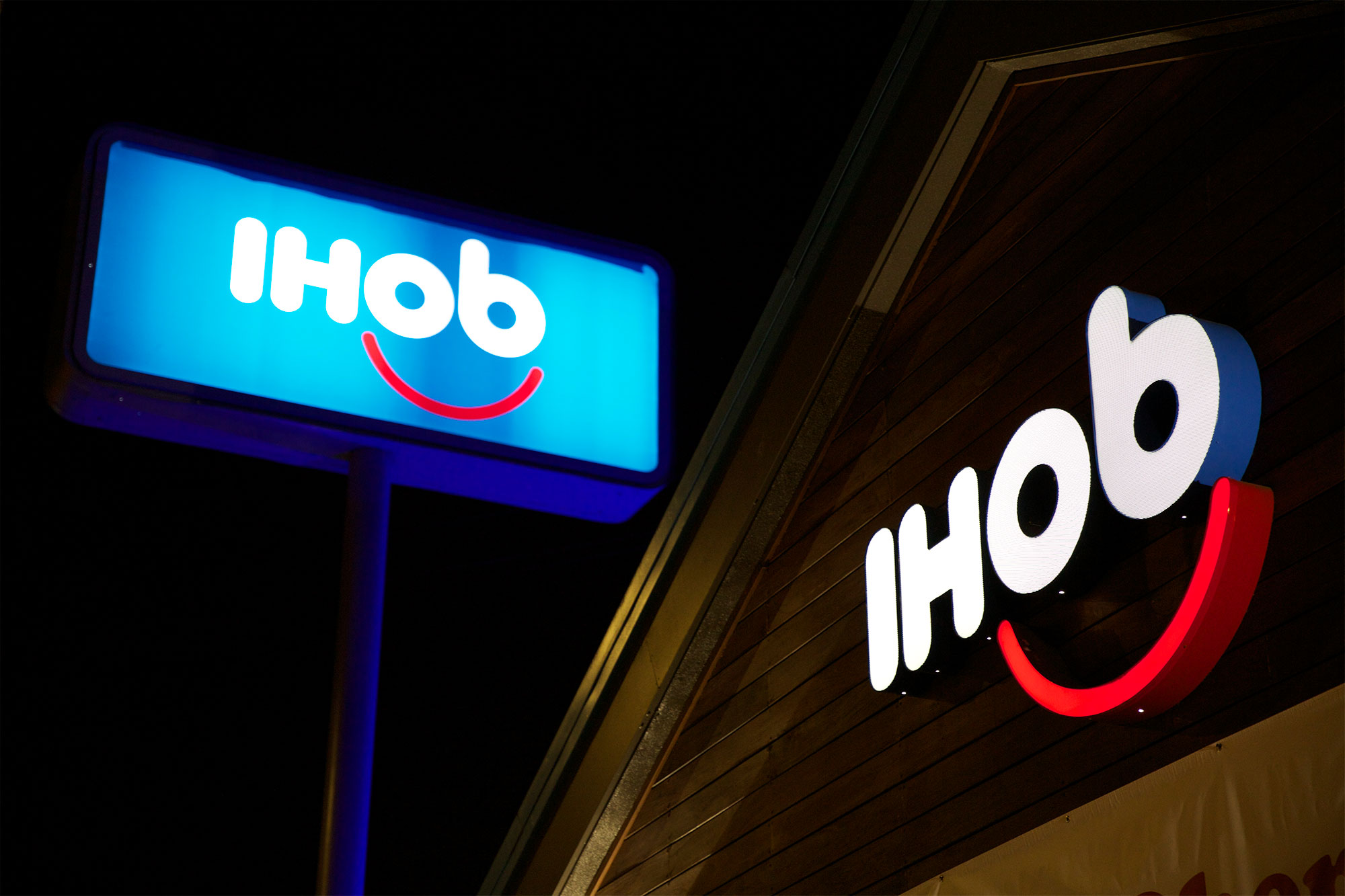 With a single tweet, IHOP went from a forgotten breakfast chain to a front-page, top-of-the-hour story on every TV and newsfeed in America. It crossed party lines, transcended gender and ignored age. It was so profoundly ridiculous that it united us all.

And then they flipped the switch. It turns out they have burgers too. Ahhhhhhh. Bravo, IHOB. You win.

2018 proved that sometimes it only takes one letter to impact culture. And that pancakes and butter still belong together. 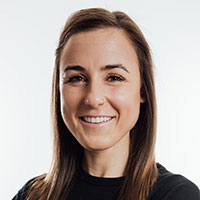 While Kaep was Nike's biggest moment of the year, we believe U.S. Nike Football's fall campaign is a sleeper hit you may have missed.

"Destroy Doubt" was a call to believe—a challenge for high school athletes of all ability levels to ignore the haters and chase their crazy dreams. We took this call to believe on tour, literally, loading Antonio Brown—No. 84 for the Pittsburgh Steelers and one of the best wide receivers in the sport—into a swooshed-out bus to visit six schools around the country who embodied the dream: Teams who had never won a game. Teams who struggled to field a team (and ultimately recruited women to the cause). Teams who had lost their funding, or even lost their coach.

We captured the experience in social in real time, inviting other storytellers to join the work. Our work showed the unfiltered experience of the bus and the field—gritty, authentic, emotional—revealing a side of the sport we rarely see, to an audience who used the message to find their own confidence and conviction.

We saw a 200 percent lift in reach and engagement for the brand in social, along with unprecedented amplification from other NFL athletes joining in on the story. The campaign's best performance metric, however, was the emotional utility of the idea—a reminder for every athlete to "prove them wrong," and destroy doubt on the field this fall.

Billie's pro-women, pro-body hair, pro-equality campaign is one of our favorites from the year. The DTC razor company built its brand on fuzz—the body hair the shaving category has refused to show on women until now. In Billie's world, women get to live, look and sport leg hair as they choose.

The brand pushes its message beyond the work—driving awareness of the "pink tax" in women's beauty products, creating pro-women media such as stock photography that proudly displays women with body hair, and donating a portion of proceeds to charities like Every Mother Counts.

A favorite place to witness the success of Billie's work is in the comments of their Project Body Hair video on YouTube. We all know YouTube comments can exist as a vortex of negativity, but in Billie's, you'll find women voicing genuine appreciation for the product and mission.

"I relate heavily to the girl only shaving the parts of her legs that show through the rips of her jeans," writes BeezyKid. Her comment references one of the many details of the work that pierces through our expectations of media into a secret world of experiences. The ones we all know but never discuss.

Details like this not only remind us of why we get into this business—to make creative that sparks connection and feeling—but serve as small steps in a bigger journey to make the world a little safer for women. I started my Billie subscription last week, and I too will shave if and only if I feel like it. 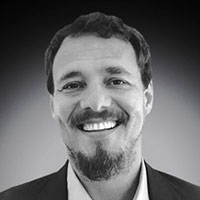 This idea from Argentina—to collect 2 pesos bills that were going out of circulation, and donate them to a nonprofit focusing on education—is a good example of great direct marketing techniques applied to drive action and solve a relevant social problem.

The results are quite impressive: The campaign managed to impact half the population of the country and raised almost half a million dollars.

One of the reasons I believe this idea worked so well is that it connected to a trending national topic, something the country was already talking about—the 2 pesos notes going out of circulation. Another point to consider is the low engagement effort: All people needed to do was to give something that was about to become worthless anyway. Finally, the use of influencers to promote the action on their social channels created another unexpected layer of interest for the campaign, attracting potential donators and driving conversion.

Another idea that worked: Tesla, "Live Views of Starman"

For me, creativity is about being brave to challenge everything that's out there, defying what people think it is possible. This idea does just that. I really like it because it's simple, bold and it doesn't look like advertising at all. The fact that they livestreamed the car launch shows no lack of confidence. And if you think about it, SpaceX would have had to carry a payload anyway; picking a car from their own sister company to promote its launch is simply genius. 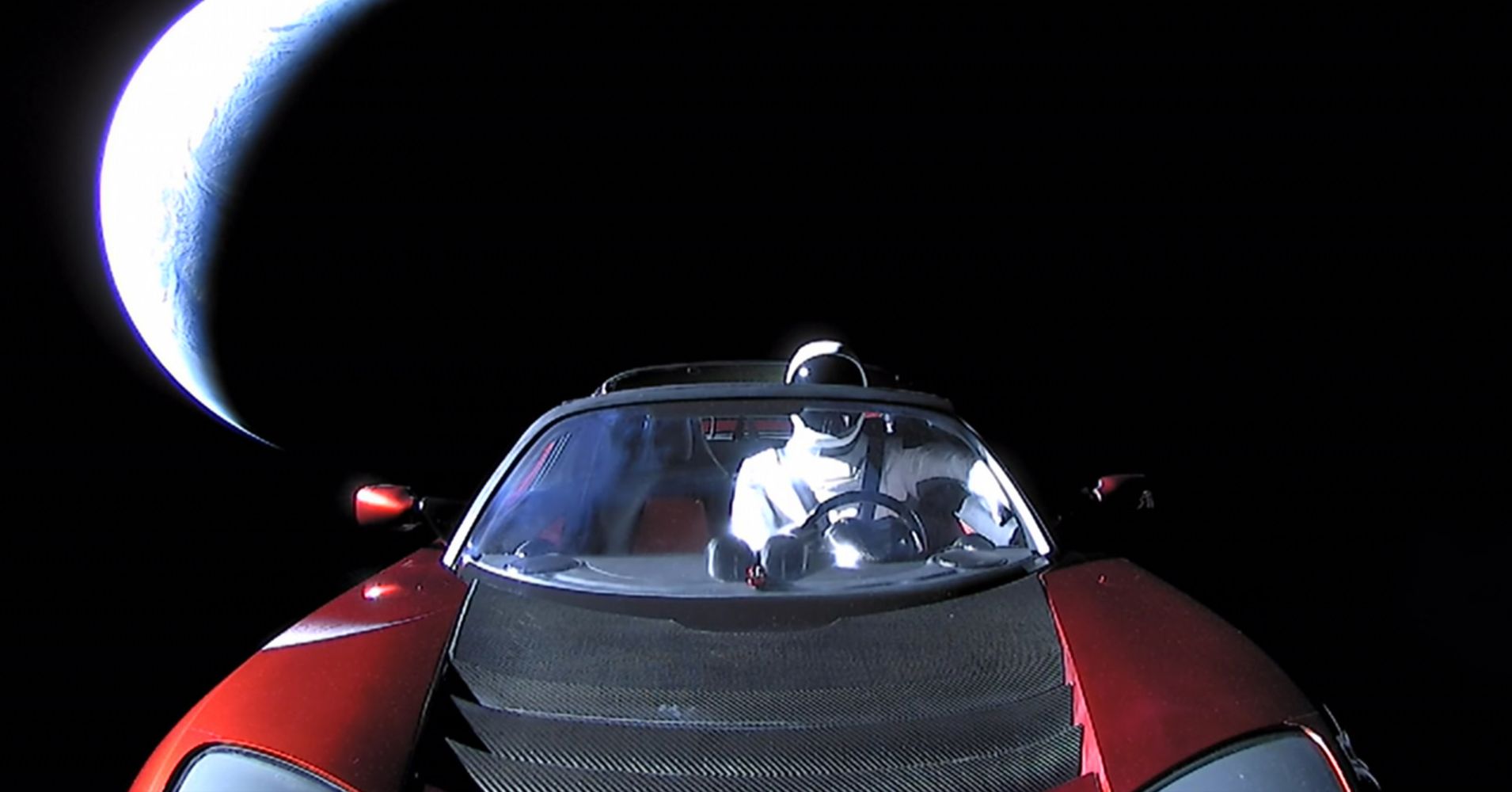 It cleverly promotes two products from the same company—the car and the rocket—in an epic and culturally relevant way. I love the fact that they decided to broadcast everything live; it shows how bold they were. And I also like that they thought about every single moment of the experience, leveraging real-time data to create a website that allows us to precisely track the car's location in space. You can check its location even to this day. 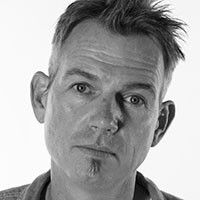 "We want to reach millennials and younger consumers!" said every brand over the past decade.

Our own Del Monte client was no different. Tasked with that challenge—and the goal of celebrating Del Monte's 125th anniversary—we set our sights on a digital and social campaign that would eventually blow nearly industry benchmark out of the water. 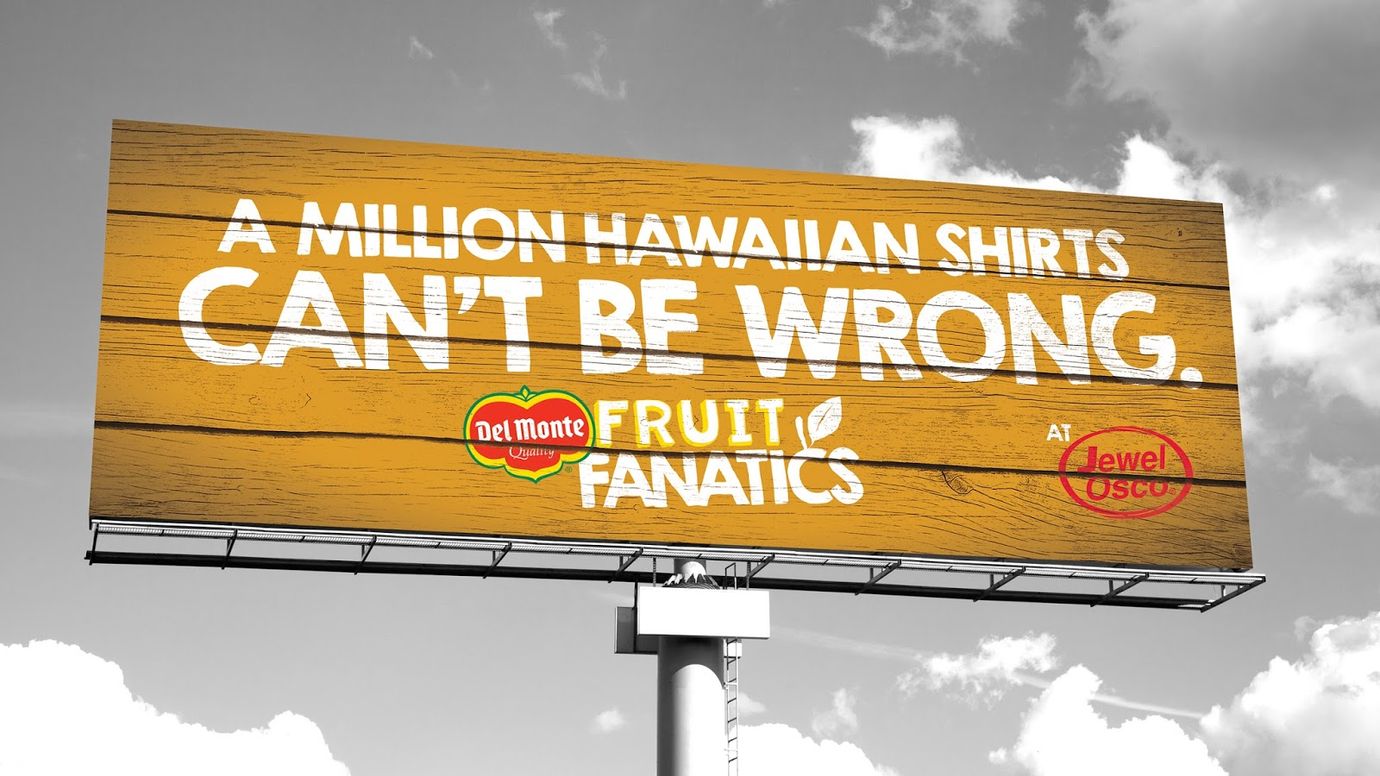 The "Fruit Fanatics" campaign had a simple goal: Find America's biggest Fruit Fanatic and send that 20- to 30-something on a trip to Costa Rica. Armed with a microsite and the hashtag #FruitFanatics, fans filled social media with posts and videos celebrating their love of fruit. To spread the word in the real world, we plastered key markets with OOH boards, Divvy bike station takeovers and transit advertising.

The results? Almost a quarter (23 percent) of supporters shared content (which overshot the industry standard by 35 percent), 52 million impressions (yeah, we reached millennials), and contest site visitors averaged more than two minutes per visit to the site—crushing the industry norm by 250 percent.

Another idea that worked: Nike, "Believe in Something"

Great ideas rarely play it safe, and no one is better at giving brand managers an ulcer than Nike. The brand's "Believe in Something" campaign embraced Colin Kaepernick at a time when he was viewed as marketing pariah by nearly everyone, including the NFL. 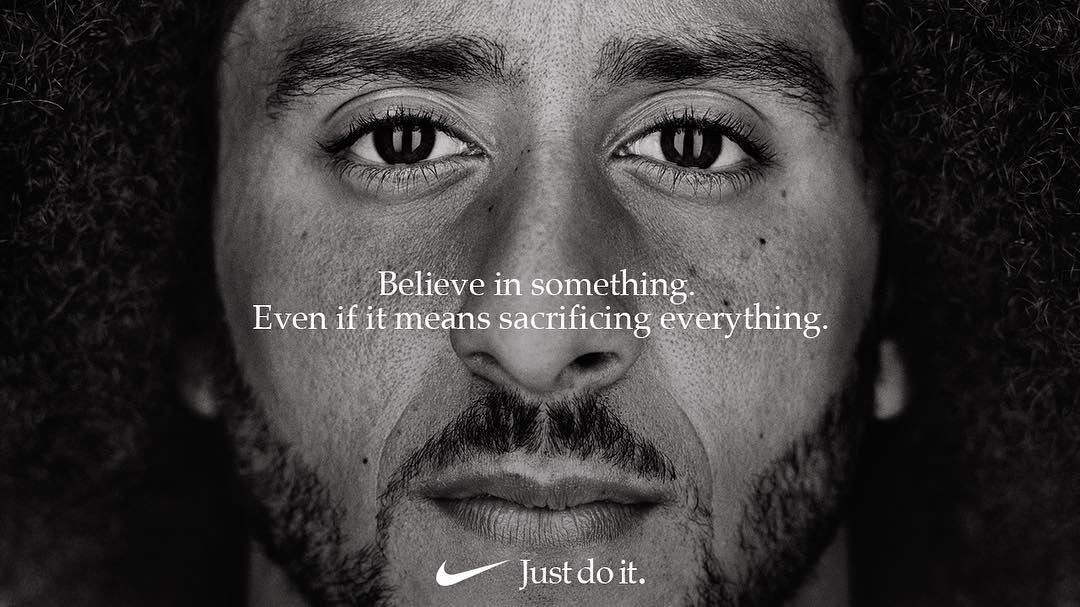 They did it because Nike knows its target audience (young males who fully support Kaepernick's crusade) better than any brand in existence. They did it because they know that sometimes you have to take a stand, even if it means alienating some of your customers.

And in doing so, Nike received more than $43 million worth of media exposure in the 24 hours after revealing the ad on social media. The vast majority of that exposure was neutral to positive, proving that NOT playing it safe is sometimes the smartest move a brand can make.