Bringing Light to Sex Trafficking in the Suburbs

"Your Suburbs Are Not Safe."

That's the name of a campaign from Lacey's Hope Project, which is using Human Trafficking Awareness Month to tell people that trafficking isn't a poverty-related or overseas problem; it occurs even in the most innocuous of American neighborhoods.

Created by Serve Marketing, the country's only all-volunteer nonprofit advertising agency, the campaign opens with a PSA titled "Mary Mack." If you thought playground songs were creepy ("Ring Around the Rosy," anyone?), this exploits that vibe to full effect:

There's something unnamed and sinister about the moment a man runs his knuckle down the face of the young woman—too old for double-Dutch, too young to be an adult. But it's hard to fully comprehend this feeling, because people don't associate the suburbs, where kids play in the street, as hotbeds of sex traffic.

A nine-minute documentary provides context. Titled "I was sex trafficked in the suburbs," it features Lacey's Hope Project founder Emmy Myers, her mother and sister.

Myers was trafficked in her junior year of high school. Their explanation of how it happened highlights its insidious nature—an aggregation of teenagery red flags that are so banal, it almost feels like sleepwalking into a monster's jaws.

Once there, Myers was hidden in plain sight. She was trafficked via text and apps, to men "you never think about"—men on their way to work, "CEOs, businessmen, soccer dads, cops, politicians, priests…"

The list evokes a Richard Scarry story, except that all the friendly neighborhood professionals are complicit in feeding a secret, insatiable demon.

This fuels the campaign's provocative print work, featuring the faces of victims and phrases like "You can order her faster than a pizza" and "You think boys don't get sold for sex?" 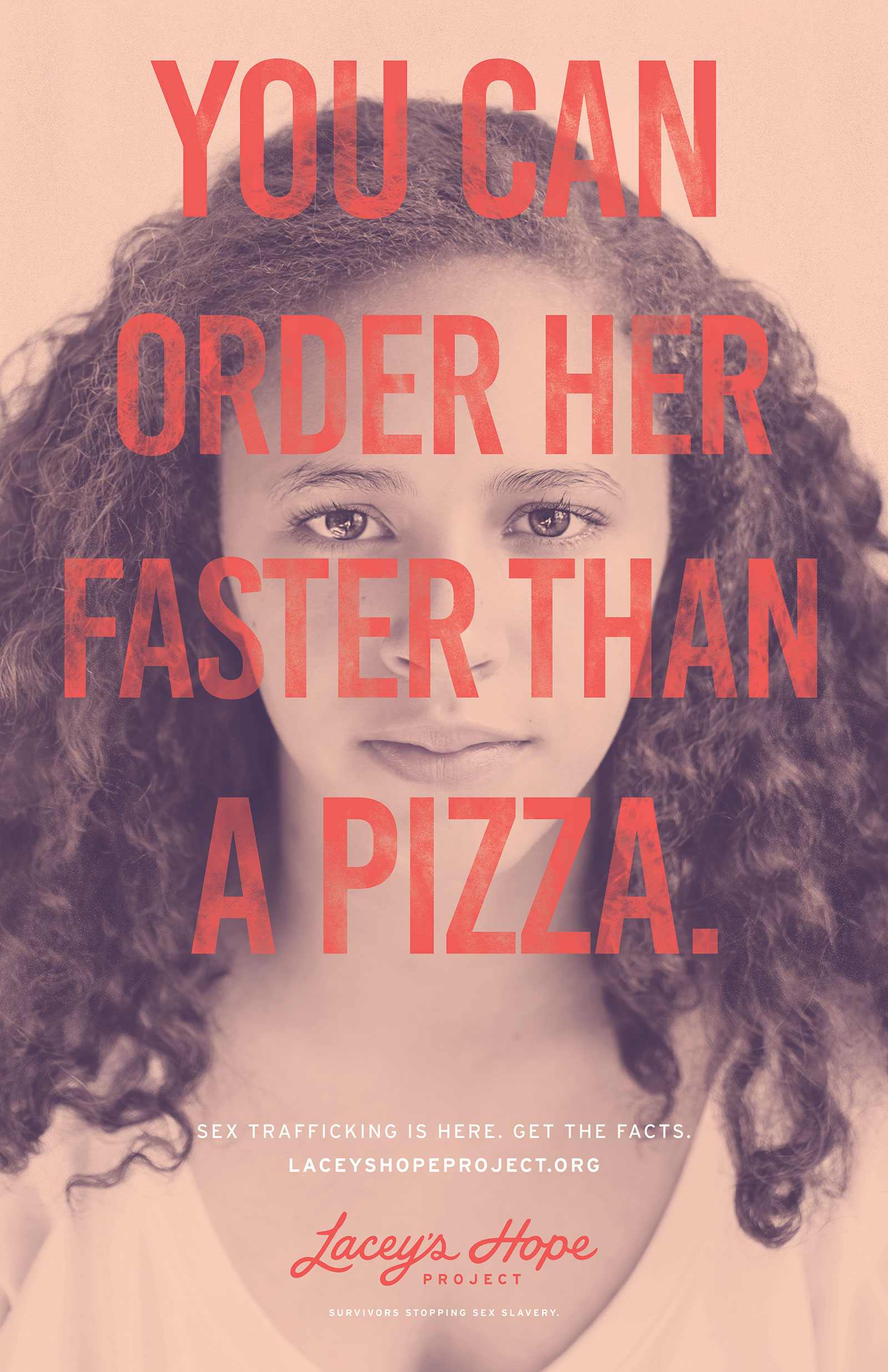 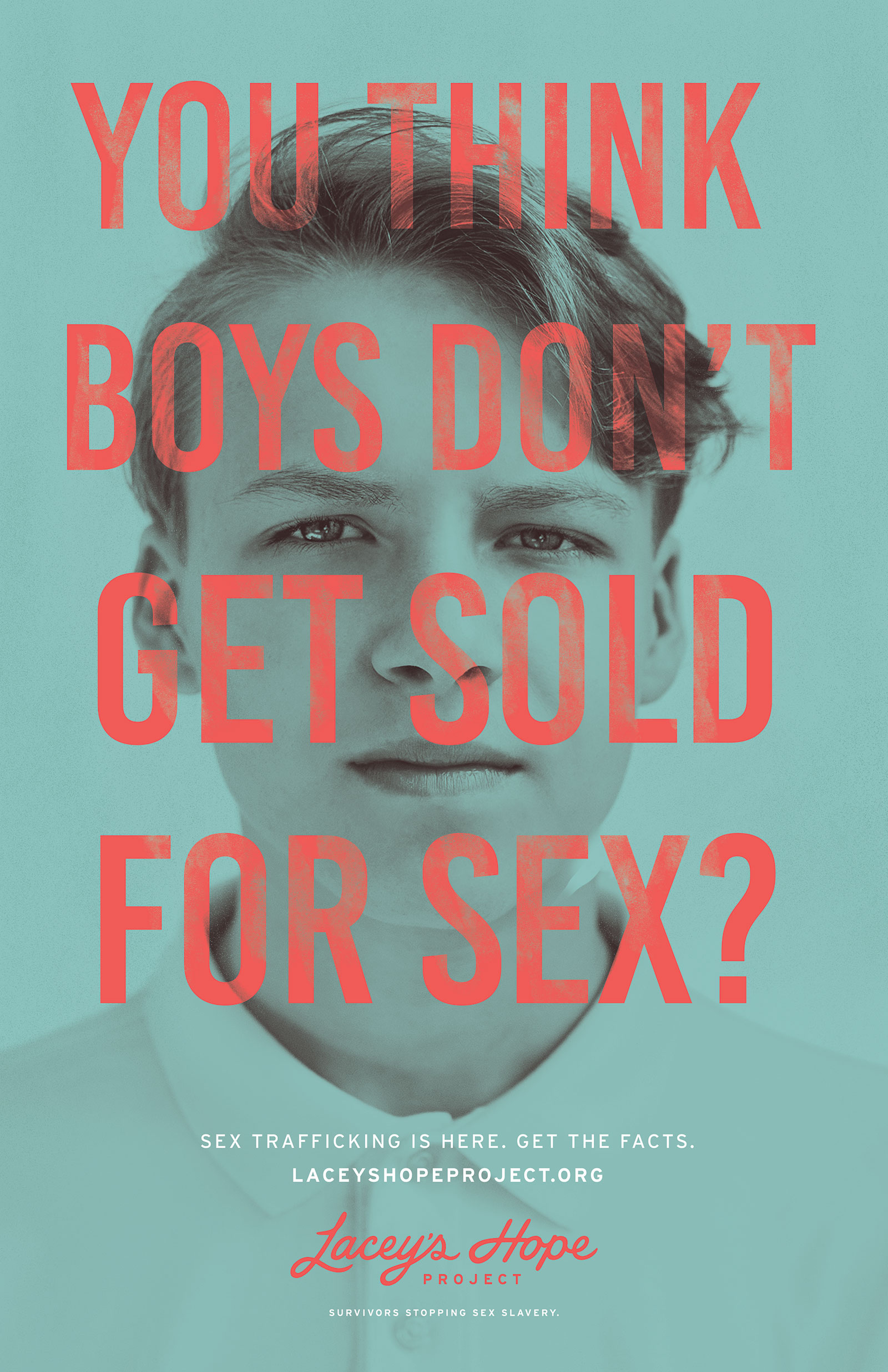 "People that live in the suburbs think of sex trafficking as something that happens somewhere else," explains Gary Mueller, a Serve volunteer creative director. "The reality is, sex trafficking is a growing problem everywhere, and we need to make people more vigilant."

The work is targeted to the Milwaukee market, ranked No. 3 in the nation for sex trafficking, though cases involving minors were reported in all 72 Wisconsin counties. It went live this week via outdoor, TV, radio, digital and social media channels.

All content drives users to LaceysHopeProject.org, where you can learn about warning signs and find useful resources. Print campaign variants appear below. 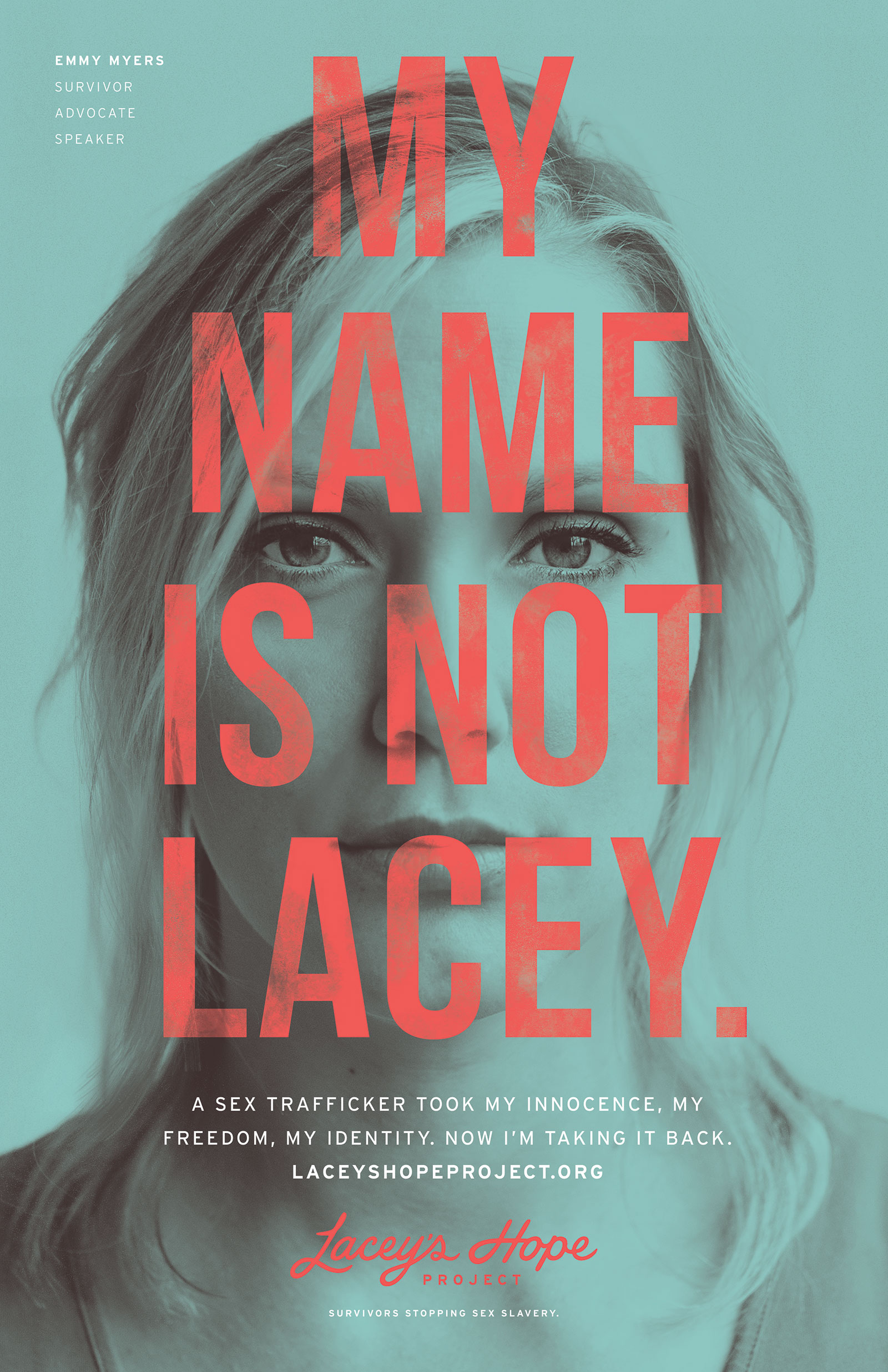 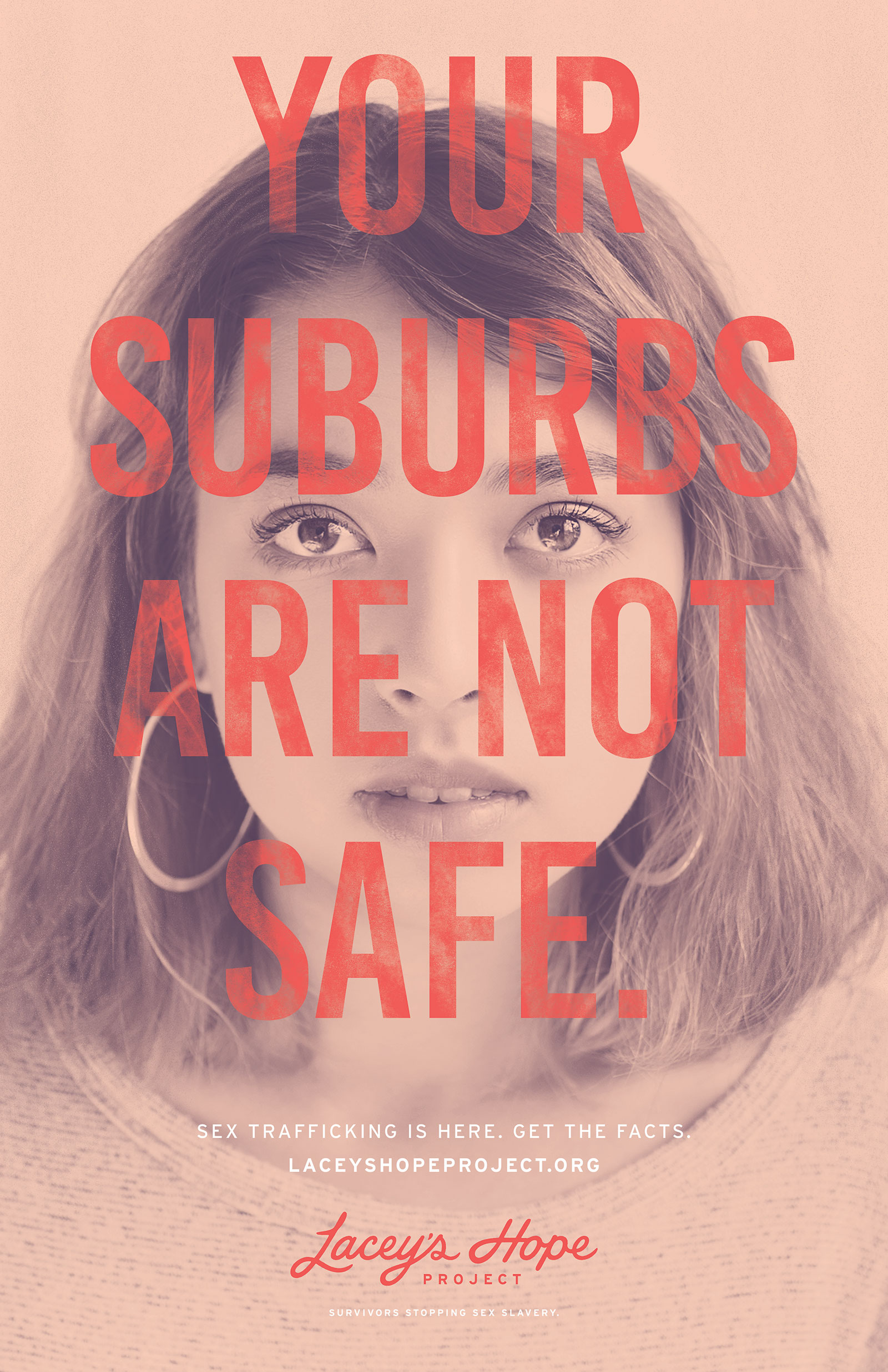 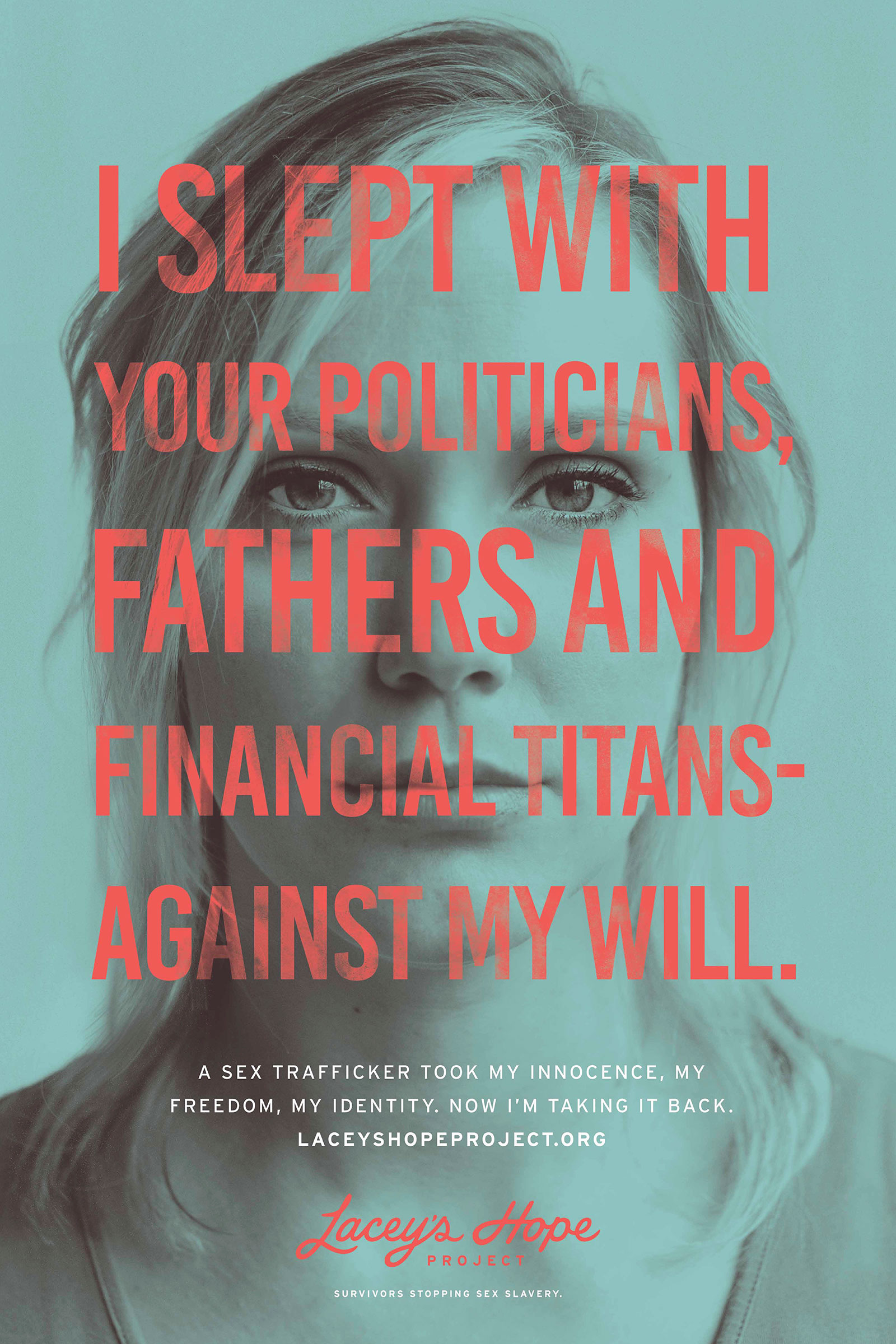