What's the best way for an all-natural deodorant brand to cut through the clutter?By burning a witch at the stake, naturally.

"Mayhap she's crafted powders, oils or wax into a natural salve to counteract the body's foul odors," one muses.

"Or mayhap … SHE'S A WIIITCH!" the other responds.

A wild chase ensues, complete with locals brandishing pitchforks and an axe-wielding masked executioner, ending in…

… arguably the freakiest product shot of the year—a fiery hand clutching a stick of Purelygreat. 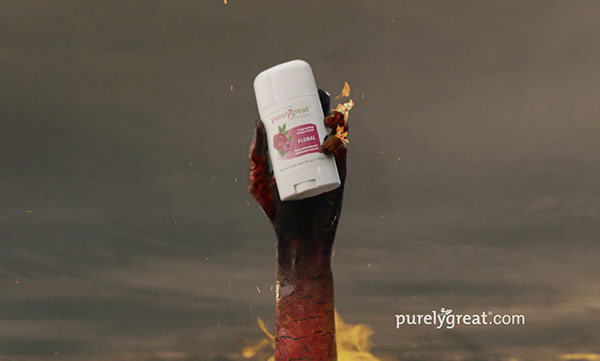 "This is a small client, and so breaking through was of huge importance," says Henderson. "It would have been easy for them to do the classic product shot, but they wanted something disruptive for the category."

Alas, no human beings gets roasted in this next spot, though a peasant does go barmy from "tinkering with spices" to invent a way to neutralize odors. And there's a sly jab to Old Spice's classic "I'm on a horse" line.

"The idea came from the product itself," Henderson says. "It's all-natural, which is a growing trend, but people are still suspicious of natural deodorants. Will they work? Are they strong enough? We imagined that in the past, when hygiene practices left a lot to be desired, the product's efficacy would have been met with a much more elevated state of suspicion. At its core, it's a product demonstration carried out in an over-the-top environment."

"We can't imagine a better torture test than the Dark Ages," adds Purelygreat founder Philip Pellat. "If we had been around back then, the world would've smelled different, that's for sure."