Barry Sonnenfeld, the Hollywood director, is known for his visual sleight of hand—going back to his work as cinematographer on Coen brothers films like Blood Simple and Raising Arizona, and his own directorial efforts such as the Addams Family and Men in Black films. Sonnenfeld has also honed his shot-making skills by working on commercials, most notably in 1988 on a Clio-winning spot for Nike that was delightfully filmed from a dog's point of view.

His latest ad, a fairy tale-themed :30 for HR software company UKG, has the same level of panache, with a potent mix of production design, CGI and ambitious camera moves resulting in a compelling spot that premiered Friday during baseball's World Series.

It opens in a bedroom, with a girl reading her father a bedtime story, which turns out to be a fantastical tale about workplaces where all the employees are happy. From the bright color palette to several magical swooping shots, the spot—from the agency Zambezi—is one eye-catching confection after another.

If the spot seems painstakingly assembled, it was. Sonnenfeld tells Muse that in all his projects, and particularly in ads, he likes to pre-plan everything down to the smallest details—and hates surprises on set.

"Probably because I'm an only child, I'm a control freak," he says. "The worst place to ever make a decision is on the set. Between time and crew cost and all that, the more you can pre-plan everything, the better off you are."

Sonnenfeld worked with the production designer Michael Wylie on the UKG spot. The pair also worked on the Emmy-winning TV series Pushing Daisies together, which also had a storybook quality to it. The UKG ad brings back themes from Pushing Daisies, like the opening scene, where the wallpaper and the bedspread have the same pattern.

"There's a scene in the pilot of Pushing Daisies, where Kristen Chenoweth—her wallpaper, her bedspread, and her bathroom are all exactly the same," Sonnenfeld says. "And now, because of computers, just like with visual effects, Michael was able to take an image of wallpaper—it goes into a computer and the computer then can print that image on anything. Wallpaper, bathrobe, silk, the bedspread. So that's what we did in this spot, too. I'm really glad you noticed that because it's kind of a subtle thing we're doing. But the more you pre-plan everything, the more you dig into details so that no one on the day of shoot goes, 'Wouldn't it be great if her bedspread match the wallpaper?' 'Yes, it would be great. And we've already planned for that.' The more we can figure out ahead of time, the happier the shoot goes." 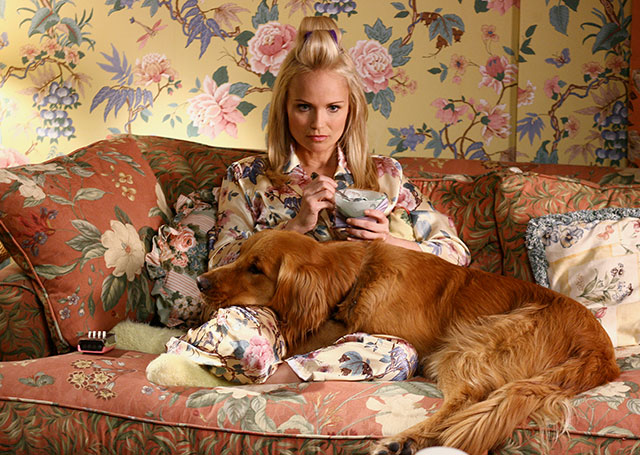 There are other Pushing Daisies echoes in here, too. Jim Dooley composed the music. And the kitchen scene is reminiscent of Lee Pace's character, Ned, a pie-maker.

"I love to move the camera," Sonnenfeld says. "Some directors use the camera to record something. I use it as another character in the show. So as you can see, there's a lot of camera movement. For that kitchen stuff, we really took advantage of moving the camera across all those very colorful tarts and all that. We used a techno crane for the kitchen scene. The idea was to visually tell a story from a child's fantasy storybook point of view. It was two very easy days with very easy clients, both client and agency. It was fun and collaborative."

The shot between :05 and :10, where the camera moves through the crane to reveal the crane operator, was also complicated, Sonnenfeld recalls.

"That shot seems fairly straightforward, but there's a lot going on there," he says. "Because I had all this time in preproduction to previs that shot, again, there were no surprises. We didn't have to cut out of that shot for something else because the clients then realized we're not seeing enough people or whatever. So for me, it's all about preproduction. And it's all about—in this case—how you tell a story that's fantastical in terms of color, production design, color saturation. Also, UKG has a certain color palette. So we try to use as much green as we could, which is my favorite color anyway. Flesh tone looks great against green."

Sonnenfeld says the final scene, in the clothing store, was the most challenging.

"We had to tell a lot of stories there, which is the woman's clothing magically changing," he says. "That segment had the most coverage. Everything else very much felt like a continuous single move, from the crane operator to the kitchen chef, all that. And by the way, we also designed a way-oversized chef's hat on purpose because, again, that's what a child would imagine a chef should be like. But again, because we had it all previs, there were very few decisions made on the set and that made it very smooth. I think the first day we may have wrapped at 3, and the second day we wrapped right after lunch. If we were having those discussions on the set, we'd still be there."

Barry has done quite a few commercials through the years—including this hilarous one for Reebok with talking tennis balls, also a Clio winner—and finds them to be delightful little films to produce.

"I live in British Columbia. And I always joke that we always can tell when there's a local Canadian commercial because, no offense, but they usually don't look right. They tend to be overblown, over-lit like a bad '70s comedy," he says. "So I do love commercials because they are about visual storytelling or they're about comedy. Both things I love. What's really hard is visual storytelling and comedy. One of the things I'm really proud of is that a lot of what I've done in my career is both comedy and visual at the same time. I remember Judd Apatow seeing RV and asking me how I was able to make these visual comedies. And the truth is, one of the things I do that a lot of people don't do in comedies is I shoot with single cameras. A lot of comedies are about improv and playing around on the set. I hate that. As we discussed, I don't like ad libs. I always say, 'Yeah, that's great, but let's do it coupled with the way it's written.' Because you work really hard on scripts to get them right. And then, you don't really want to screw it up by making rash decisions on the set. I know I keep talking about this, but the more I can have everything predesigned in preproduction, the better off I am."

In addition to its debut during the season opener of the World Series on Friday, the UKG spot will air on broadcast, social, digital video, and connected TV through 2023. The campaign will also feature digital, print, outdoor, audio and more, with a global reach in key international markets.