On behalf of Coalition for the Homeless

Photo courtesy of Coalition for the Homeless

Following the murders of four homeless men on the streets of New York last weekend, the Coalition for the Homeless and agency Arnold New York quickly produced an obituary—running in today's New York Post—to honor the men's lives and remind New Yorkers there was more to their identity than being homeless.

"People who knew them lovingly referred to them as being 'kind and quiet,' 'always grateful,' 'seemed so sweet' and 'very honest,' " the ad reads in part, remembering Anthony L. Manson, Nazario A. Vazquez Villegas, Chuen Kwok and the fourth victim, who has not been identified.

Here is the full ad: 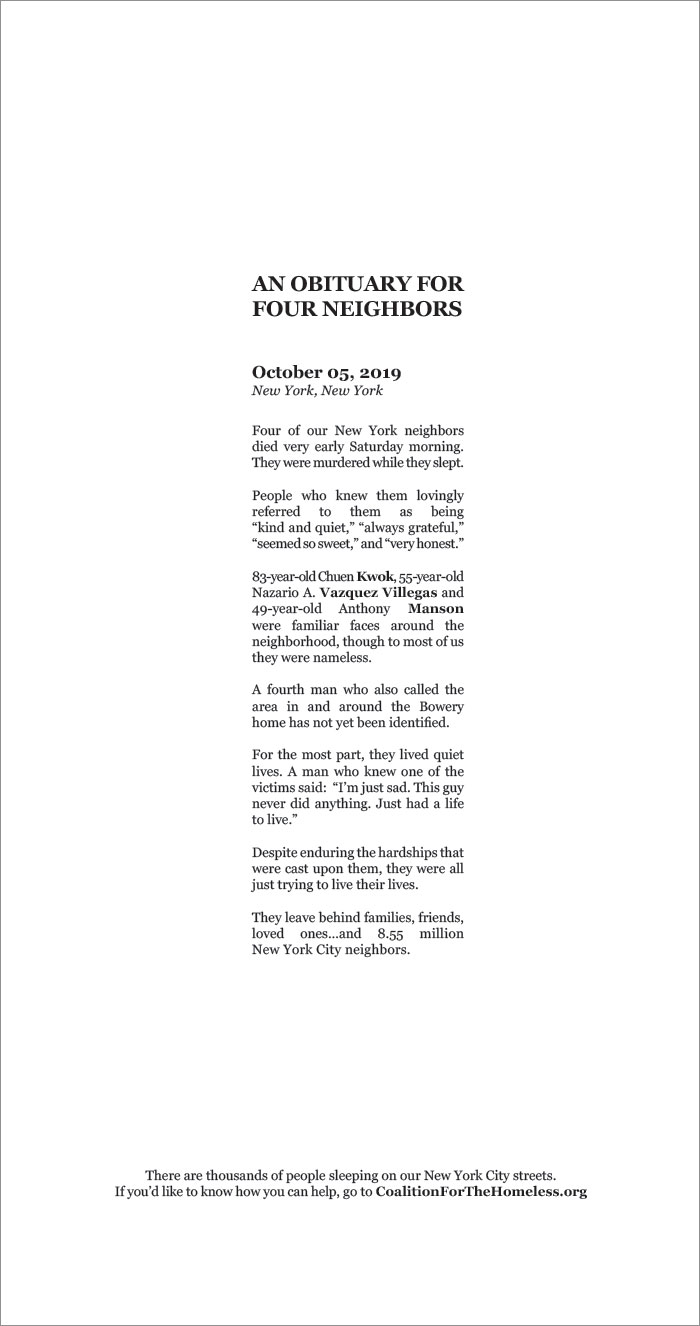 Rich Russo, managing director and chief creative officer of Arnold New York, is on the board of directors of the Coalition for the Homeless.

"We wanted the obituary to talk about their lives beyond their lives as homeless people," he tells Muse. "What sickened me about this incident, beyond the heinous brutality, was the anonymity of the victims. They were people, New Yorkers, neighbors. We all have stories, we've all fell on hard times and have questioned our worth. They were no different. But they fell further because the system let them down. No New Yorker's life should end without respectful recognition of who they were before the system let them down. And that's why we thought of giving them a proper and public obituary."

Indeed, police withheld the men's identities until late this week.

"We knew these victims deserved to be recognized beyond the news articles written about their deaths," says Andreab Chiu, associate creative director/art director at Arnold. "They were our neighbors—quite literally for us, since our office is close to where they called home—and their deaths brought to life how invisible they were to other New Yorkers every day. This situation hit us hard, so turning it around fast was something we knew just had to happen. Obituaries usually don't come out a month or two after someone passes away, so we wanted to keep this timeline as realistic as possible."

"They are not 'just some homeless people in NYC,' " says copywriter Skip Allocco. "Being a father, and having worked with the children at Camp Homeward Bound, run by the New York Coalition for the Homeless, I have a special appreciation for these kids and their parents. They are just like you and me."

Chiu adds: "There are still so many people sleeping on the streets. Please take the effort and time to say hello. They're our fellow New Yorkers, and it's time to treat them as such."