Podcasting for GE, patriotism for Away, and the pursuit of the greatest ad ever made 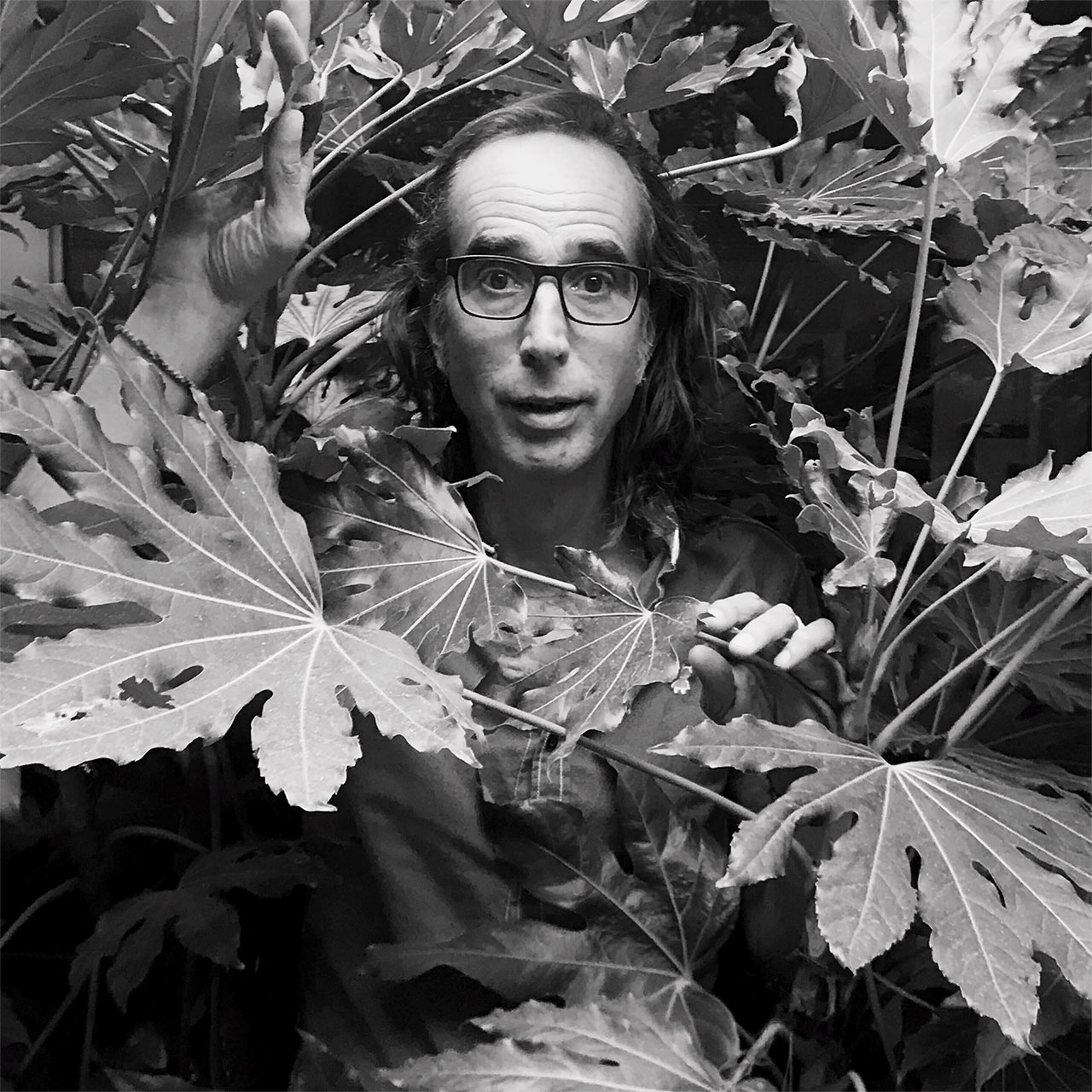 Tim Roan was an account guy for a long time. He started and sold a garden design business. He's been in two rock and/or roll bands. Tim was a writer/performer on a sketch comedy TV show. He also started the catchphrase "That shit is kodak." It hasn't caught on yet. But that's neither here nor there.

He makes advertising. And it's the best advertising ever done. Of course, this is according to his mom. And that's the only praise Tim needs. After all, gold trophies don't give lengthy, comforting hugs. Although if he may be so bold, he has been recognized by some very nice organizations: ADC, Addy, Archive, Cannes, Clio, D&AD, Directory, Echo, Epica, London International, Mercury, New York Festivals, Obie, One Show, Webby. Tim currently lives on a cloud with his wife Vicki, son Lincoln, and daughter Harriet. He will die alone in debtor's prison.

We spent two minutes with Tim to learn more about his background, his creative inspirations, and recent work he's admired.

Well, I grew up in New Jersey. (Pause for effect.) Moved to New York City as fast as I could. I currently live on a cloud hovering over Berkeley, California.

I formed an a cappella group in elementary school called Slim and the Fireflies. I was Slim. We performed in the cafeteria. It was a two-milk-box minimum. I bet they all think of me now and then, head slightly tilted up, a small smile on their lips.

For me, it all started with Cliff Freeman. Then you drill down a bit and all these famous names come bubbling out. Fun fact: I once dropped my portfolio off at Cliff Freeman and was told to pick it up 20 minutes later. Found a scrap of paper in there that said, "Next time please include hard drugs." It's the only rejection (of many) that makes me laugh.

Idolized? Sure. I've always been following Gerry Graf, Eric Silver, Greg Hahn, Jon Soto, Craig Allen, Ashley Marshall, Mark Fitzloff. And pretty much anything coming out of Minneapolis had the tone and wit and intelligence I wished I could be.

That night, down by the lake.

Well, I dig any book by Bill Bryson. So smart, so funny. And he's always pooping one out every year. But recently, for film, I loved Everything Everywhere All at Once by the Daniels. But you know, creativity is a subjective thing.

Pablo Rochat is a creative fire hose. To me, he's the bar for the intersection of curiosity, creativity, content. Look him up. Follow him.

Well, I certainly got the chance to be closer to my family; I'll take that any day. Professionally, I think we all learned about trust; that people can be great from anywhere.

It would have to be The Message, a podcast we did for GE. I'm a big believer in right people, right place, right time—and we had all of that in spades for a good five-year run on GE at BBDO New York. That assignment was everything you want: a new medium/space I had never played in before, an amazing partner in Levi Slavin, a great leader in Michael Aimette, the client Andy Goldberg gave us a free pass to make something deep/strange/new, and it won a whole bunch of shiny things.

I recently left running in-house at Away, the hipster luggage travel brand. For the Fourth of July, the team proactively crafted a smart thing to provoke all of us to travel more … so we could ultimately become better Americans. I liked poking a finger in the eye of patriotism, for the betterment of our country. 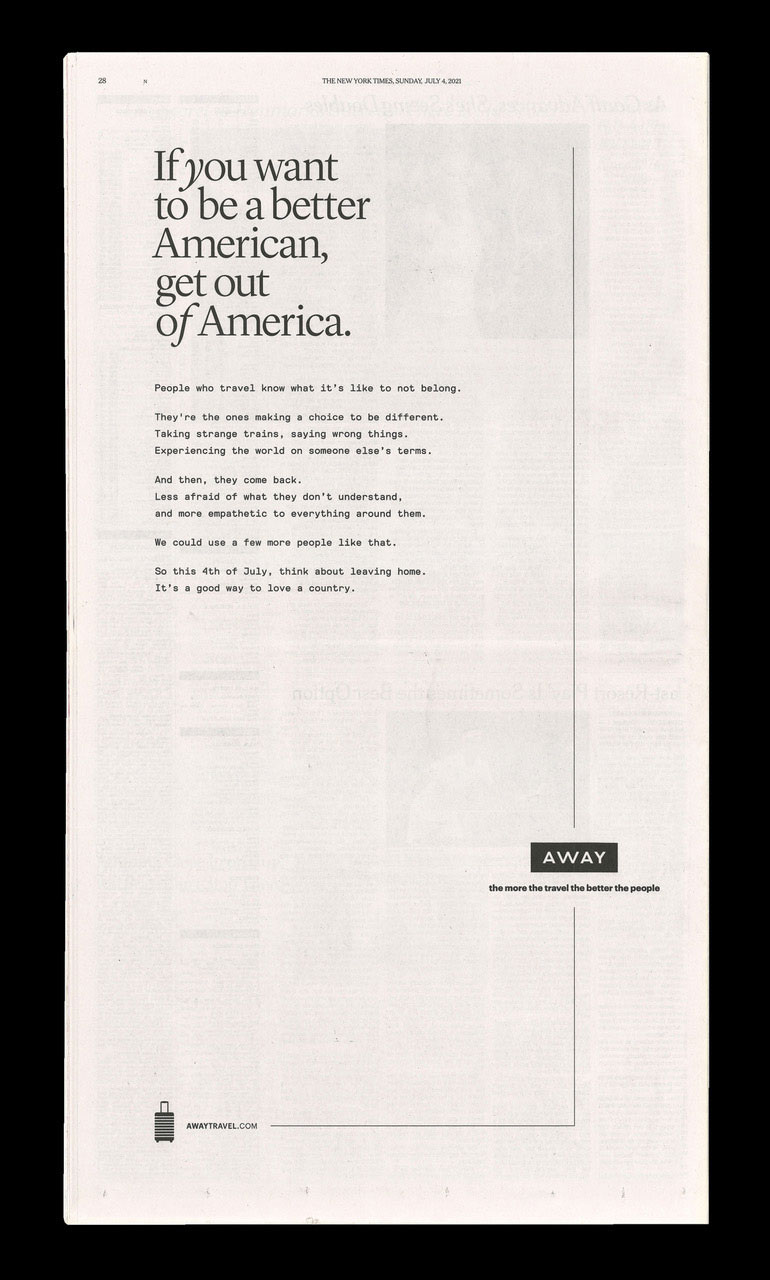 There are two kinds of inspiration for me in this business. There's "I wish did that," which covers the stuff we all loved—Skittles, DirecTV, Dos Equis, Old Spice come easily to mind. But then there's a whole other level I call "I wish I thought like that." The kind of work that makes one realize the limits of their own talents. Honda "Grrr" did that to me.

Micah Walker started a fun shop called Bear Meets Eagle on Fire in Sydney. Everything they do—Every, Thing—is lovely, funny, smart, simple, different, crafted. It certainly helps that he gets to frequently play with Steve Rogers, to boot (one of the greats).

To be honest, I've been lucky. I've had a lot of great partners, and some great bosses along the way. If I had a strength? I'm proactive and prolific. Because life is short.

The endless search for the greatest ad ever made. I don't know what it looks like, feels like, smells like—but it's just out of reach, hiding in the murky periphery of my mind, and I like that.

People who chose money over fun. That, and commercials that end with dancing for no reason.

Writing a book called They're Going to Write Books About Me. But to pay the mortgage, I guess I'd like to be a professional beach sitter.