What Budweiser Is Wisely Asking in the Wake of U.S.'s World Cup Win

Brand looks to tomorrow with the NWSL (and you)

Sunday's World Cup victory was a moment of pure joy for the U.S. women's soccer team. But while Nike memorably celebrated what the accomplishment could mean for women beyond the sport, Budweiser has its sights set firmly on the soccer field—and, just as important, in the stands.

In a 60-second spot narrated by Brandi Chastain—who scored the penalty kick that won the 1999 Women's World Cup for the U.S. over China—Bud asks the logical question: What's next?

And through a very effective voiceover and series of cleverly cropped photographs, the brand places much of the responsibility on the shoulders of fans to continue the momentum and ensure that U.S. women's soccer builds on this summer's success.

Because if it doesn't, the women may never achieve the equal pay, and equal respect, that they clearly deserve.

Bud is stepping up itself, announcing a multi-year partnership to become the first official beer sponsor of the National Women's Soccer League (NWSL) that is "built on Budweiser's commitment to continue supporting women's soccer, not just every four years but on a year-round basis."

"Budweiser has supported the U.S. Women's National Team for three decades," Monica Rustgi, vp of marketing for Budweiser, said in a statement. "But we realize there is so much more Budweiser can do. Becoming the official beer sponsor of the NWSL is our way of not just supporting the U.S. women's team once every four years, but also supporting women's soccer every single day."

Bud instantly becomes one of the league's biggest sponsors of the NWSL, with naming rights to the playoffs, the championship, the MVP trophy and a newly created "Most Valuable Supporter" award for the league's biggest fan. The partnership also includes an off-season program in which Bud execs will train NWSL players in the business side of sports. 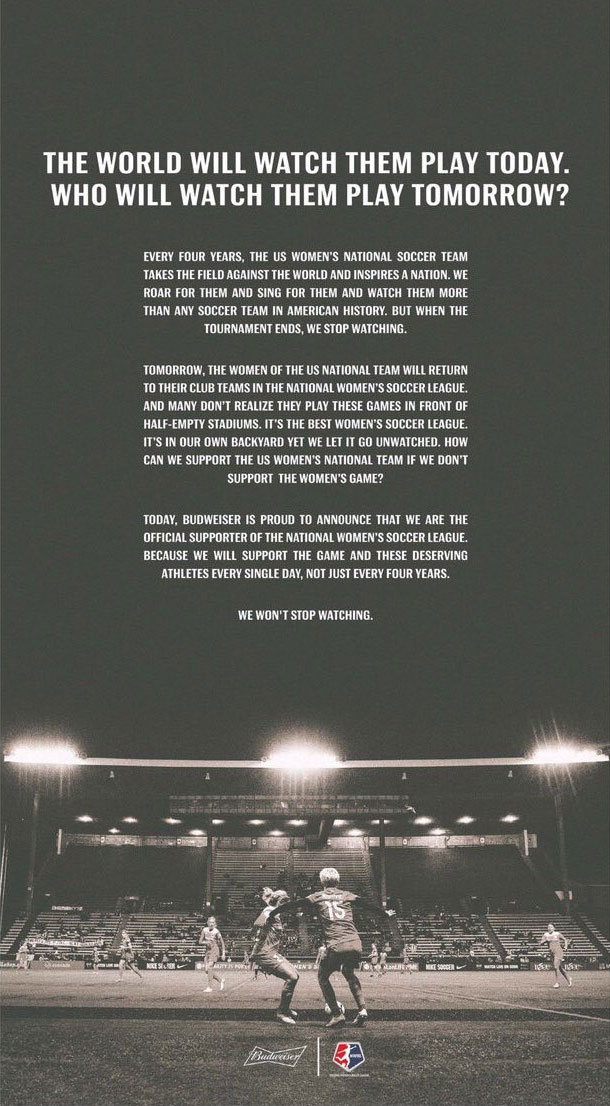 "We are thrilled to embark on a long-term partnership with Budweiser," said Amanda Duffy, president of the NWSL. "Budweiser's support is significant and will amplify the visibility and influence of the league, our players and avid supporters. This collective goal to advance women's soccer in the United States will only further propel the efforts of NWSL, as we look to bring the passion for World Cup play back home to league games."

Chastain also praised the efforts of Budweiser, which has become a true force in sports marketing generally of late.

"As a player, you always strive and hope for long-term commitments from sponsors to support and grow the game," she said. "Budweiser's sponsorship of the NWSL shows that they aren't just a champion of women's soccer abroad, but that they are invested in the further development of the sport in their own backyard."