On, the Sports Brand, Tells the Story of 'the World's Fastest Blind Sprinter'

Two years ago, we watched Olympic gold medalist Nicola Spirig from Switzerland tackle high-altitude training while raising a young family. In 2020, On profiled a couple's epic mountaineering trek through a mix of stirring live action and animation, and followed 31 refugee athletes striving to qualify for the Tokyo Games.

As a toddler, Brown, now 28 and set to compete in the Tokyo Paralympics at month's end, contracted Kawasaki disease. He began losing his sight as a teenager, but that disability never held him back. For the past seven years, Brown has worked with mentor and running guide Jerome Avery—himself a gifted athlete—to become a champion.

Connected by a four-inch tether during Brown's training runs, the pair share a deep spiritual bond, too. Eash pushes, prods and learns from the other. At times, they seem to move and function as a single human being, communing with unseen forces and tapping into a shared spirit that drives them ever faster, on to greater glory.

"Untethered" explores this bond as Brown and Avery hit the streets of Manhattan, prepping for a possible entry in the New York Marathon.

And you can watch the full 21-minute film below:

SPOILER: There's even a twist ending. Owing to injury, Avery won't serve as Brown's running guide at the Tokyo Paralympic Games. That literal untethering packs raw emotions for both, and provides a coda that helps elevate the film's treatise on life, friendship, sacrifice and love.

Streaming on Untetheredfilm.com and other platforms, the doc talled 170,000 views in less than a week—impressive numbers for a long-form offering from a niche brand.

In our conversation below, edited for clarity, Fackrell takes us behind the scenes of "Untethered."

Muse: How did the brand hook up with David Brown?

Andy Fackrell: On signed David and Jerome a couple of years back, with the purpose of using a Paralympian to tell their brand story during the Olympics. David's story fits in well with their "Dream On" ethos of celebrating the human spirit.

They approached me with this as a media idea, together with the need to showcase a normal running shoe, not just these elite athletes' spiked shoes. So, the New York Marathon scouting run was my template for telling David's backstory—and the perfect opportunity for bringing back people from his past. [They pop up to chat with Brown and Avery at various points along the route.]

Were those appearances a surprise for the two runners?

For David, we kept some aspects a secret. I wanted the real emotion of him meeting his mentors for the first time in a decade—the shock of reuniting with his first coach, Tim Cobb, then meeting his heroes J.B. Smoove and Black Thought … and finally his mom in Central Park. It was my nod to This Is Your Life. But Jerome and Francine, his mom, had known about the idea for nearly two years. I'd been emailing them for clues on David's favorite musicians, comedians and cultural figures. All credit to those two for keeping it on the down low.

Clearly, after a while, though, David caught on.

When he met Coach Cobb, his junior high school coach, it was a special moment for both of them, and very real. As a blind man, David has some strongly developed defense mechanisms, so he was obviously wary of being surprised. We chose not to edit those scenes out. By the time he met Black Thought, he knew the ruse and was way more relaxed, and more like "Oh, who's up next?"

How did you choose your director?

Andrew's football film for Nike Nigeria showed he had great visual style, a photographer's eye. I wanted "Untethered" to be a doc, but a beautiful one. The running shots had to have something unique. That's where Andrew really pushed me—to shoot in a junkyard, at Coney Island, and to deviate at times from the New York Marathon route.

Why film in black and white with splashes of color?

I wanted to celebrate the reopening of New York, an homage to films like Manhattan. Black and white also reflected David's limited vision and eventual blindness. The color snapshots from his childhood stood out more—[and symbolize a time] when he could see. It was also an emotive storytelling decision, as I was always imagining the score being jazzy, and the visuals and titles being like a classic record cover.

There's an early shot with David's head silhouetted against the skyline as he rides the Staten Island Ferry. That seems to crystalize the film's message, at least for me. He's standing tall, indomitable. Yet it's a moody, thoughtful moment, not some filmic cliché.

The opening on Staten Island defines the relationship: David in control of his career but needing other people like Jerome to pull him along.

And there's a memorable sequence with Jerome guiding David's hands over a model of the Statue of Liberty.

That scene says so much—about David's obsession with detail, his brain soaking up information from Jerome, so he can process what the statue represents. I wanted that to be a long, uncut scene that lets you follow David computing the information in real time. His sense of awe about life and Jerome's love in supplying the info made this my favorite shot. It was a good point for Peter Raeburn's musical theme to kick in.

Any anecdotes or BTS stuff from the production stand out?

After we'd wrapped and the crew had gone, David's fiancée Rebekah and I were chatting. Only then did she tell me she was a fringe Olympic archer, and that she'd been improving so fast because of her new coach—David! A blind man coaching an archer [on how to focus and dig deep during competition]—a sport where eyesight is the critical facet. The man imposes no limitations on his life.

In all my longish career working on sports, I've probably never met anyone as inspiring and nice as David and Jerome. They will not stop helping you. David even emailed some quotes a week later because he forgot to say how much he liked J.B. on Curb Your Enthusiasm. I didn't use them, as they didn't feel real and in the moment, which was something I was adamant about for this film.

How does "Untethered" work in from a brand standpoint?

Again, the brand is about showcasing the best in human spirit, and David's perseverance through his disability is a great example. These two men, as well as others in the film, from Coach Cobb to Black Thought, represent the best of us, at a time we are obsessed with our own individual achievements. Those people have given so much to David, and he's given back to them with his wonderful outlook on life. 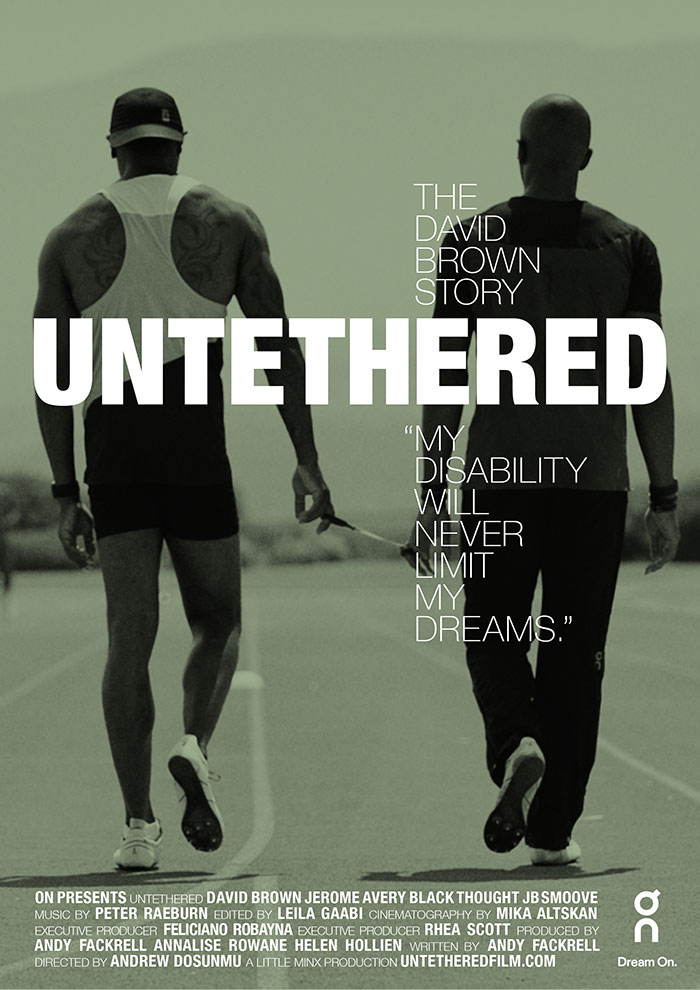