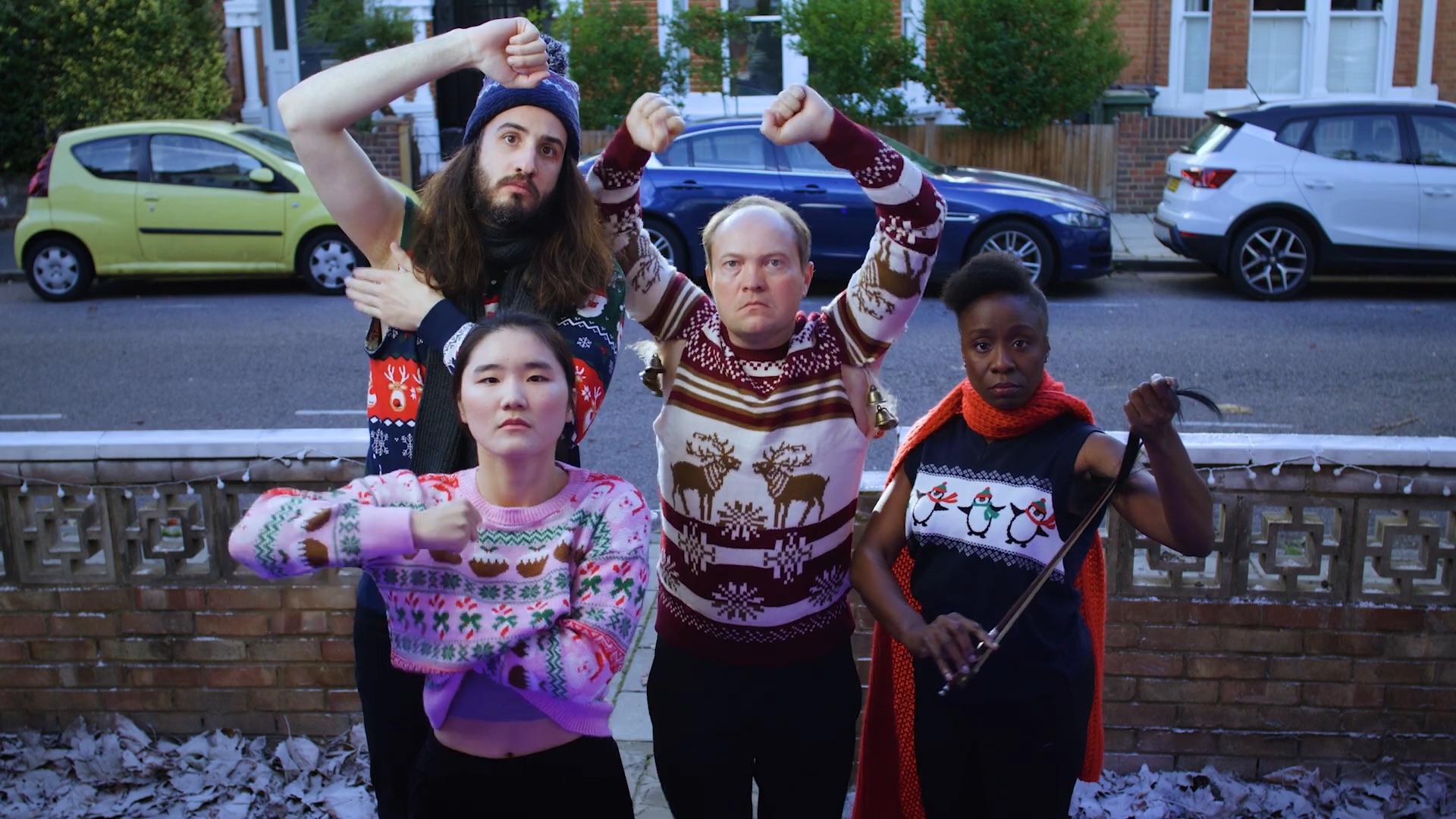 What's that festive yet flatulent melody wafting through the wintry night? Sound like "Deck the Halls," played by ... armpits?

Yes. That's precisely what it is. So, congrats to sustainable deodorant brand Fussy and agency 10 Days London. You win our shiny red bow for the silliest U.K. seasonal campaign so far.

A trio, called "The Fussy Pits," cut loose in the film below. Some jingling bells, percussion and vocals sweeten the mix—but it's most the pits. There's also a cameo by British biz maven and brand investor Deborah Meaden, also a presenter on the BBC's Dragon's Den:

"The amount of single-use plastic we throw away every year is just silly," says Meaden. "So, why not a silly song to help provide a solution! Now more than ever is the time to be Fussy about the brands and products we choose to support."

Taking a cue from "Do They Know It's Christmas?", the tune is billed as a "charity single," available on most streaming services. Proceeds from each download on Apple Music and iTunes support Plastic Bank's war on ocean pollution. It could top the charts by Dec. 25. Something will.

Muse spoke with the 10 Days crew behind the work. Thankfully, they responded to our questions with their mouths:

Muse: Armpits for Christmas. Makes sense for a deodorant brand. Still, explain why.

Jolyon White, creative director/film director: Fussy is obsessed with everything armpits, CEO Matt Kennedy particularly. We were working with them on a separate campaign, and they asked if we could create an armpit farting song for Christmas. We instantly saw the silliness in it and paused the other project. Armpit farts alone could have made this cheesy, but we landed on a great idea of turning the armpits into musical instruments. That awkward deadpan style humor just seemed to fit the brand.

Composing and arranging music is challenging. Especially for ads. I imagine doing so for armpits is even tougher.

Dominic White, co-founder: Being a composer and sound designer, I've been asked to record some pretty interesting things, but never armpit farts. I chose to take it seriously, in the classical style. I wanted to experiment by recording different people's armpits but surprisingly, there is an art form to it and not everyone has the knack.

So, who's armpits perform on the track? Never thought I'd be asking such a question. But here we are.

Dominic White: The track was made using a range of genuine armpit farts. We gathered armpit sounds from various people from Fussy, including Matt Kennedy—and any extra farts required were sourced from the 10 Days team. We also got some live farts from Deborah Meaden herself which made it into the song.

Talk about making the ad.

Eleanor Harvey, producer: We had to stop oncoming pedestrians one take at a time—which is not in itself unusual, but in order to keep the timing of the performances we had to play the armpit song at full volume on a speaker. Explaining what was happening was, well, hilarious for the passersby to hear, particularly if they were in a rush! Neighbors were staring out of their windows, either looking bemused or laughing out loud.

Dominic White: The Fussy Pits then did the equivalent of lip syncing [pit syncing!]—to create the visual spectacle you see in the film. We have had multiple requests for The Fussy Pits to attend events and perform. We expect the call will come in any day for them to headline Glastonbury.

One of the carolers has incredibly long pit hair. Almost like a beard—or a ponytail. It's hypnotic. Also unsettling if real.

Eleanor Harvey: Yes, we tried to make an authentic armpit hair bow, but alas it didn’t work. We still managed to use all natural materials.

How'd you get Deborah involved for a cameo? Why her? What does she bring to the brand message?

George White, producer: Deborah is not only an investor in Fussy through Dragon's Den, but also a huge sustainability advocate. Fussy is a sustainable deodorant with plastic free refills and natural effective ingredients. Fussy CEO Matt pitched Deborah the concept and she was game, which was amazing, but the trouble was finding a window in her schedule to film her—especially in the 10 Day turnaround. We found 45 minutes last week, and of course she was a pro on set. Her support brings a captivating authority to such a playful campaign and will help the good cause reach further.