Plus, her work with Martha Stewart and on the 'World's Largest Pot Brownie' 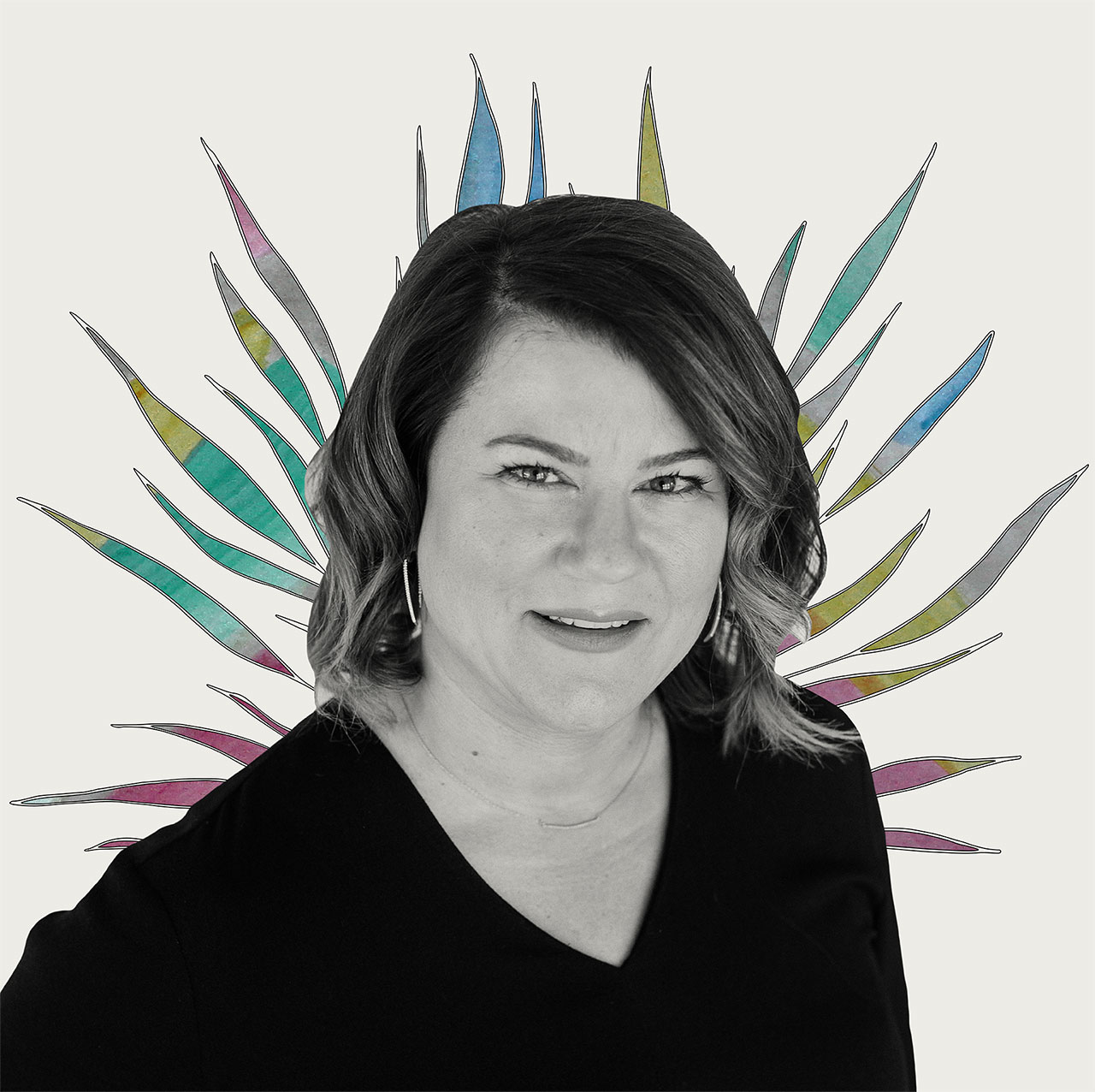 Lisa Weser is founder and CEO of Trailblaze, a marketing communications agency for a new generation of cannabis, psychedelic and lifestyle brands. From the launch of Martha Stewart's CBD line to cooking up the World's Largest Pot Brownie, Trailblaze is known for cutting-edge ideas and creative execution designed to put cannabis brands on the mainstream map.

As the former head of U.S. marketing communications at AB InBev (Budweiser), Lisa pivoted from beer to bud, establishing Trailblaze to bring a more sophisticated approach to brand storytelling in an emergent industry. Previously, she was an SVP at the global PR firm FleishmanHillard, where she led communications and digital campaigns for Fortune 500 companies.

We spoke with Lisa for our Higher Calling series, where we chat with leaders in the cannabis space.

I moved frequently as a kid, but my teen years were spent in Iowa, where I graduated from high school and went to college. Since then I've lived and worked in London, Italy, Chicago, Denver, St. Louis and New York City, before recently settling in Ohio near family—which presented the opportunity to start my own cannabis communications practice.

After learning that traditional communications agencies would not serve growing cannabis companies while marijuana remained federally illegal, I founded Trailblaze in 2017 with a singular goal: to bring a more sophisticated, disciplined and mainstream storytelling approach to the cannabis sector. We are a virtual marketing communications agency with employees in New York, Los Angeles and the Midwest.

I suffer from mild chronic pain due to an autoimmune condition, and before I discovered cannabis, I was taking two to six Advils every day. When CBD hit my radar, I began educating myself on the endocannabinoid system and taking sublingual cannabidiol—aka CBD oil administered under the tongue—every day. After about two weeks I noticed I was nearly pain-free and hadn't reached for the ibuprofen in days. That was a game-changer for me and truly turned me into the "plant ambassador" I am today.

I use some form of cannabis almost every day, but I'm also what you'd consider a microdoser. For me, cannabis is a panacea that helps to head off chronic pain, reduce anxiety, shift my mood state at the end of the workday, and sleep more soundly. As a textbook change-seeking Gemini, I like to experiment with different formats and effects, so I'm always trying something new.

From an inhalation perspective, my go-to is a hybrid strain like Cookies mixed with CBD, and the brand depends on the state I'm shopping in. I've found pens I like a lot from Kurvana and Rhythm. I also love the convenience of pre-rolls like Sunday Goods or Lowell's Happy Hybrids. Lately I've been on the East Coast a lot and have had the chance to try premium flower like LIT from Ayr and Nature's Heritage Live from MariMed.

I typically turn to edibles at night for sleep, especially when adjusting to the time zone change traveling between the East and West coasts. Kiva's 5mg Midnight Blueberry THC gummies with CBN work great, and their 2.5 mints are fabulous for microdosing or building your dose. Kahna Nanos are my go-to for quick onset, and I turn to Betty's Eddie's Bedtime Betty's if I really want to knock myself out!

I've largely replaced alcohol use with cannabis, and I find infused beverages are best for social occasions. They definitely aren't all created equally, and I'm picky about finding the right combination of taste, onset and efficacy. I'm a fan of Cann, Kalo, Levia and Wynk for seltzers, and Vibations makes a pocket-to-pour powdered mix with caffeine that's good.

By far the biggest obstacle and complication for marketers is the fact that cannabis can't cross state lines, making it incredibly difficult to deliver product consistency, much less build a national or global brand. It's a problem that's further exacerbated by the fact that cannabis brands can't legally advertise on streaming TV or major social platforms like Instagram or Facebook—particularly during a pandemic that has kept most people at home, viewing the world from their screens.

The opportunity to help companies navigate this complex marketing environment and find clever workarounds for tiresome regulatory problems is the reason I started Trailblaze in the first place, and it's forced us to rise to the challenge and deliver some of our best work.

I'm most excited to see the caliber of mainstream marketing talent that is starting to pour into the cannabis industry. When I made the move from a big CPG like Budweiser myself, I was risking career suicide. Five years later, we're attracting top talent from some of the most admired consumer product, fashion and tech brands in the world. It's a sign that the sector is maturing, that destigmatization campaigns are working, and marketing budgets are growing as companies shift from just trying to survive to building a portfolio of lasting brands. That's the future I envisioned when I entered this industry, and it's beginning to come to fruition.

My social justice work has been largely focused on the issue of inclusion, particularly for BIPOC and female-identifiying entrepreneurs. Having spent a career working in industries and companies dominated by white men, it's important to me to build inclusion into our nascent industry from the ground up. As a medical patient myself, I also work with and donate to organizations that prioritize healthcare and essential services for these groups.

I've found that the best way I can contribute is by donating my time and expertise through pro bono work for organizations like Black Cannabis Magazine or Pink Ribbon Girls. Nothing feels better than getting serious ink to help publicize the work of an overlooked group or cause doing work that matters, and they deserve all the attention we can bring them.

Launching Martha Stewart's CBD line with Canopy Growth in 2020 felt like a pivotal moment, both for my agency and the industry. Years from now when we look back and chart marijuana's path from illicit to federally legal, I think the introduction of Martha Stewart CBD will be viewed as a milestone moment driving the accelerated uptick we're seeing toward cannabis's mainstream acceptance and usage. It was incredible to be a part of that project, working with a legendary multi-hyphenate like Martha and seeing months of planning come to fruition on the cover of the New York Times Styles section.

I'm also very proud of the "World's Largest Pot Brownie" we brought into the world with client MariMed, which went unexpectedly viral and resulted in nearly 2,000 press stories around the world. Seeing it pop up on Saturday Night Live's Weekend Update and several other late-night monologues was a thrill because I knew we'd hit a cultural nerve and exceeded expectations—and the team had a blast pulling it off.

I had the opportunity to judge the Clio Cannabis Awards this year, and I was blown away by the variety and quality of the work submitted. I love unexpected PR stunts, so my particular favorite was from a Canadian company that made "Car Crash" potato chips that tasted awful—we're talking blood, metal and blacktop—as a "driving while high" prevention campaign. Edgy, smart, effective and unforgettable.

I really admire the work that Charlotte's Web has done, along with Realm of Caring, to prioritize researching and improving access to cannabis as a cure for chronic illness. You definitely encounter people who are working in cannabis for the wrong reasons, so it's heartening to see examples of companies who put patients first while still delivering powerful marketing and profitability.

I'd probably be curating an art gallery, designing interiors, or trying to write a novel. I'm sure I have a few more career pivots to go!

Checkup is a weekly Muse series, publishing on Thursdays, where we chat with leaders in healthcare marketing. To learn more about Checkup or our Clio Health program, please get in touch.