"Something is taking control of the students!"

Two plucky teens battle the zombifying scourge of vaping addiction among their friends in "The Mind Control Menace," an illustrated adventure from the U.S. Food & Drug Administration.

Developed with Marvel creative lead Darren Sanchez, the story, set in high school, shows how "those who were affected follows the same routine. Had the same personality. At least at first." Soon, however, our heroes observe that the vaping students "seemed off. They weren't quite the same ... like the entire town was distracted, slightly out of step." 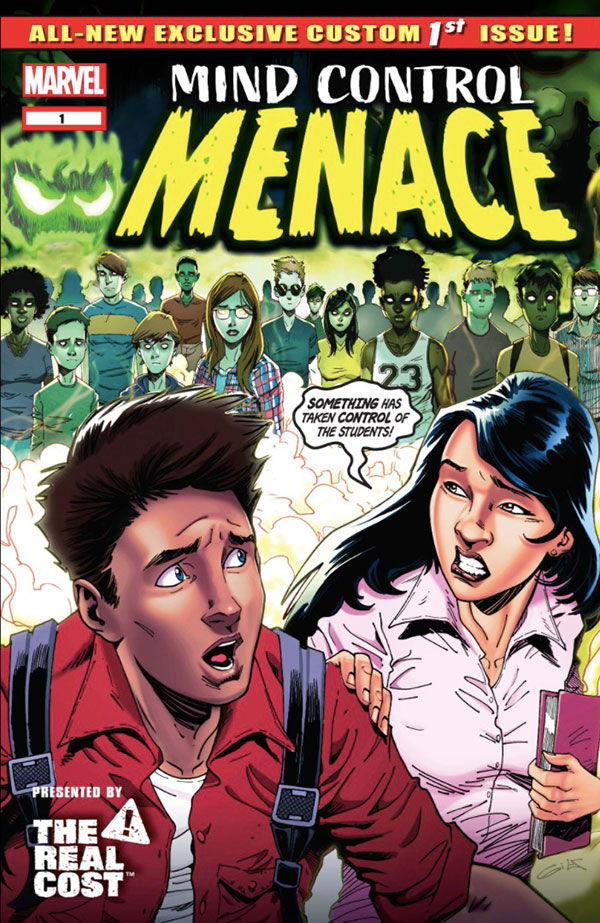 You can read the 16-page comic book created by FCB New York and Marvel here, and check out an animated version below.

Smoky tendrils snake through suburbia. High schoolers shamble around like the undead, and, oddly, their eyeballs vanish. (These pupils have no pupils!) Our heroes ultimately prevail by using a time-helmet to show their vaping pals that a grim future lies ahead. (Whoa, that school has some STEM curriculum!)

"The End ... or is it?" reads an ominous concluding panel, followed by a reminder for readers to stay vigilant and visit TheRealCost.gov. It's pretty over the top, and that's fine, given the self-aware, Marvel-ous context of the campaign. The kids use science to save the day, a touch that should appeal to kids who code. Sure, their invention's pure fantasy, but it feels more appropriate to the storyline than hokey superpowers.

"The target audience is anyone between 12 and 21 whose thumb would stop scrolling at the first sight of a Marvel-style illustration," FCB executive creative director Gary Resch tells Muse. "Teens have a diner-sized menu of diversion, so you really have to entertain them on their terms. Marvel has earned their confidence that a good story is about to be told."

"We spent a lot of time debating the most provocative way to illustrate the villainous addiction," Resch says. "Is it in human form? Is it a beast? We wanted something very alien, an entity we can't relate to—no eyes, no mouth. We felt a mist or a fog would capture that eerie, sentient, possessing force best."

Produced under the FDA's "Real Cost" banner, "The Mind Control Menace" marks another notable teen-targeted campaign, which have proliferated in recent years with vaping's popularity on the rise. It's way less jokey than the Evelyn Lilly Lutz Foundation's slang-saturated messages from grannies to Gen-Z ("Vaping during Covid is just plain headass!), more akin in its creepiness to the non-profit's earlier PSAs with demonic, flame-eyed folks riding young people's backs.

"The thing about superhero stories is that beneath the fantasy lies real life issues we can all relate to," says Resch. "Ask anyone who's ever been addicted to nicotine and they will tell you the battle is real."