In October, when Jeff Benjamin joins Tombras as the 73-year-old independent agency's first-ever chief creative officer, he'll have a former advertising journalist to thank for helping him land the new gig.

Six months ago, shortly after his exit from Barton F. Graf, where he had been partner and executive creative director for two years, Benjamin found himself at a dinner party in Brooklyn, exploring business and creative ideas.

"I had just come from a meeting," he recalls, "and like a total dork I pull up a PowerPoint deck on my iPad. I went through some thoughts on what I thought an approach to modern marketing could be."

"He leaned over and said, 'Jeff, I need to introduce you to one of my clients,'" Benjamin says. "He tells me about this place in Knoxville, run by a 'genius' named Dooley. And that we would be perfect together. I thought he was nuts. Me? Knoxville? Huh?"

Five months later, "Matt texts me and says Dooley is in town and wants to meet," says Benjamin. "At this point, I've been consulting with some brands and a media startup [New Stand]. I'm happy. But I'm also curious. So, I think—why not?"

After one chat with agency president Dooley Tombras, whose grandfather launched the shop in 1946, "I knew this felt right," Benjamin says. 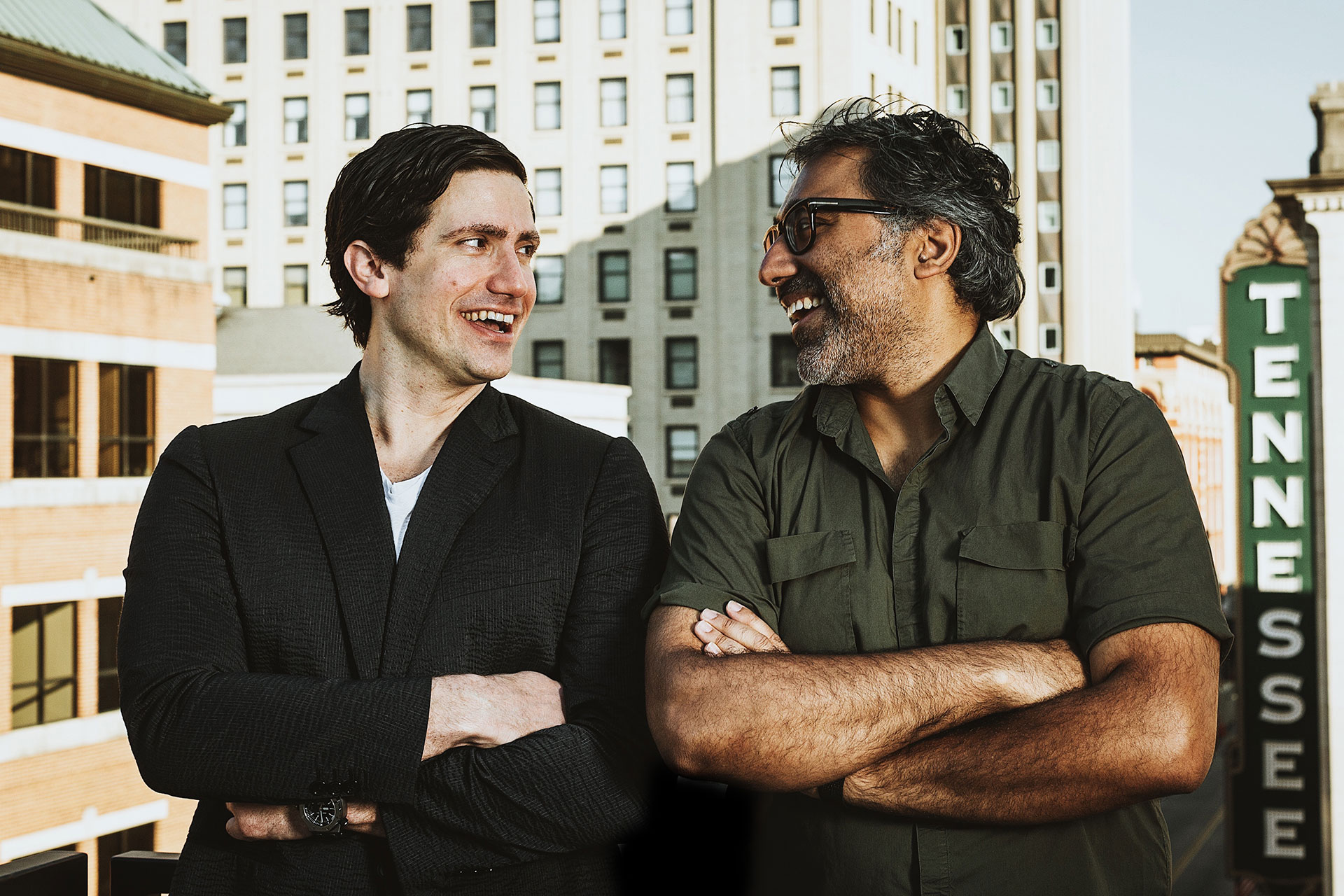 Before his stint at Barton—an indie praised for its quirky, humorous work, but which will close its doors at year's end—Benjamin held senior posts at J. Walter Thompson, Crispin Porter + Bogusly and Goodby Silverstein & Partners, overseeing multifaceted campaigns across a range of accounts.

"At Miami Ad School in 2005, we were all paying very close attention to everything coming out of Crispin, and everything Jeff did was so inspiring and became the foundation that the digital era was built on," Dooley Tombras says.

At Crispin, Benjamin helped shape high-profile work for Burger King, Domino's, Kraft, Mini, Volkswagen and Virgin Atlantic, among many others, while his JWT tenure yielded impressive outings for Google, Nestlé, Nokia and Puma.

"When you look at the most recent things he's done, like 3-D printing a bar for Bulleit Bourbon and convincing Clash of Clans to take the Builder out of the game and into the real world, it's all pushing the industry forward," says Tombras. "He's always evolving, and that's probably the hardest thing for a creative at his level to do, let alone at every stage of their career."

Though the agency hadn't been seeking a chief creative (Tombras himself filled that role), Benjamin's big-brand background, management chops and desire to leverage data in building campaigns—a speciality of the shop—were too attractive to pass up.

In this conversation, edited for length and clarity, Benjamin tells us about his creative approach and explains his vision for Tombras moving forward.

Were you very familiar with the agency and its work?

I've been aware of Tombras' work but not Tombras. As a consumer, I saw the MoonPie eclipse "Lol, ok" tweet and later learned how they turned the eclipse into a usage moment and sold so much product that the factory had to be shut down. [MoonPie trolled Hostess for declaring its cupcakes "the official snack food" of the August 2017 total solar eclipse.]

Orangetheory has always been an incredibly inspiring brand. Some former co-workers from both Crispin and JWT are clients, and I've stalked that brand because I love what they've been doing and what they stand for. So when I found out Tombras was involved with these brands, it was kind of a "What?!" moment. Technically what they've been able to build and do in Knoxville is impossible. To have that talent. To have media in-house. They've got a room that looks like Cape Canaveral with all these screens with data arriving in real-time for creatives and other teams. The things they're doing with A.I., and to have a culture where it all works together ... it's a little mind boggling.

What will you do on your first day; what's job one?

I'm going to try not to mess anything up that's working. Which appears to be everything. Especially the teamwork. They've won 12 out of 13 pitches this year. That's crazy. Do you know how hard it is to win something these days? It's a testament to how much of a team they are. I've spent some time as a client, and I can tell you that when you're on the other side of the table, you just know when a team isn't on the same page. You can feel the [negative] energy and you want nothing to do with it. And likewise, when the energy is great, you want to be around that team because you know, with them, anything is possible.

Do you have specific ideas for organizing personnel, or for specific clients?

Tombras is already headed in the right direction. I've already had a job where you're taking something pointed in the opposite direction, and the first thing you need to do is turn the organization around with a new system of thinking, or set of people and beliefs. That's not the case here. So the structure, leadership and people don't need to change. They're great. I'm here to build on the current approach and continue to use modern tools to help inspire and realize breakthrough creative.

Can you talk about how data informs creative work?

There's no one way to use data. I'm excited to dig into all the ways it can work with creative, the creative process, and where and how that creative shows up. A pretty simple way it's helped me in the past is evolving an idea once it's launched. I like to think about momentum versus campaigns. So how we "extend a play" is everything. When we did the Builder campaign for Supercell's Clash of Clans last year, data helped evolve that campaign after it launched.

What did you learn at Barton versus CP+B?

At Barton, I learned how to be funny by being genius. What makes their work great isn't that it's funny, which it is, but that it's genius. The best stuff that came from there had you laughing out loud. But inside you aren't thinking, "This is so funny—haha." You're thinking, "Wow, this is genius. And smart. And strategic. Here's a product or brand truth. And I think I want some pizza [from Little Caesars]." So, making work that's genius was something we really worked on there. And it created incredible awareness for brands. More importantly, though, we were unapologetic about making ads. As an industry, we're almost ashamed that we make ads for a living. And we try and reframe or call these things we make something else. We made ads for our clients at Barton, and we were obsessed with whether or not they were working.

At CP+B, we had an approach that wasn't about making ads. We were out to make culture through breakthrough moments that solved marketing problems. Our best stuff had invention and participation at the center of it. How do we tear people off the sidelines? Move them from being spectators to participants with a brand.

What qualities or skills make you a good creative manager?

Lately, I've been spending a lot of time thinking about what motivates and inspires creative people. I came across a great documentary and shared this story with a few of the creatives at Tombras when things were starting to get serious. It's about music producer Rick Rubin working with Johnny Cash. RCA had dropped Johnny, and so Rick calls him up and tells him he wants to work with him. Johnny wonders, "Why do you want to work with me?" "And what would you do with me that no one else has done?" So Rick goes, "Well what do you want to do?" And Johnny goes, "Well, I've just always wanted to be on stage. Just me, my guitar, a microphone … no band." Rick responds, "Well, that's what I want to do!" They lock themselves up in the house, working through all of Johnny's old material, debut it in a rock club, and go on to make an album which becomes one of the greatest albums ever made [the Grammy-winning American Recordings, from 1994, cut in the legendary musician's living room]. You have to trust and believe in a creative and help give them the confidence to be the best versions of themselves so they can go on to make the best things they've ever made.

What inspired you to get into into advertising in the first place?

If I could do anything, I'd be an actor—but just in lawyer movies. I tried studying real law and discovered it's nothing like TV law. Now, strangely, TV law has everything to do with advertising. Solving problems, improvising, surfacing and reframing truth, listening, being clever and funny, being persuasive—these are all qualities that great ad people have. So basically Tom Cruise and Dylan McDermott got me into advertising. And the third season of Suits brought me back when I dabbled in the startup world.