In the spots, directed with admirable panache by Dean Alexander, bunnies appear in many forms—masks, plush toys, actual pets … with a mystical moon-rabbit shining above it all.

Each fanciful, fluffy tale seeks to distill the personality of a specific SC high-rise property. As expected, the dwellings are gorgeous, but the focus stays on the residents and their amusingly surreal adventures.

First, we meet a modern-day beatnik pursued by an outsized furry friend:

Next, a single gal suspects her birthday bunny might possess magical powers:

Finally, we get a mildly hare-raising story about a swan-boat ride in a rooftop pool:

It's a fun departure for the real-estate category—an impressionist exploration of how a home feels to its occupants, on par with Design Army's acclaimed, esoteric productions for Hong Kong ballet, which Alexander also directed and photographed.

"We started with questioning the notion of home," says Design Army creative chief Pum Lefebure. "What does it mean? Far more than shelter and things. It's a place to be our true selves, where we dream big, weird dreams—a captivating place that has this intangible magic to let your imagination run wild. And we brought that magic dream in through the rabbit, and a symbol from Chinese folklore about the rabbit in the moon."

She adds: "Showing off wealth with overly Photoshopped pools and fancy-dressed high society doesn't work. It lacks the emotion and gets lost in sea of the gazillion marble-floored luxury condos. You have to tell a different story that speaks and connects to the experiential."

Divergent takes on Brooks Bowman's 1934 jazz standard "East of the Sun (and West of the Moon)" provide a memorable soundtrack for each ad. Styles range from ring-a-ding swing and free-spirited soul to herky-jerky pop. These are newly recorded and mixed renditions created with Squeak E. Clean Studios, formerly Nylon Studio, in Sydney.

"Our target market is the new-wealth Gen Z, so we needed to find a way to elevate the sensory aspect," Lefebure says. "How are we going to stand out? By finding a song that sounds different than anything in the Thai market."

"We'll build a dream house of love dear
Close to the sun in the dayNear to the moon at night
We'll live in a lovely way dearSharing our love in the pale moonlight
Just you and I, forever and a day
Love will not die; we'll keep it that way
Up among the stars we'll find a harmony of life to a lovely tune
East of the sun and west of the moon dear."

Filming was a homecoming of sorts for Lefebure, who grew up in Bangkok. She reports it took plenty of hard work to make the whimsy and magic come alive.

Mainly, "we had to overcome the heat," she says. "We were shooting in 110-degree weather in the middle of summer—and still jet-lagged. The great thing was that every property had a beautiful pool." 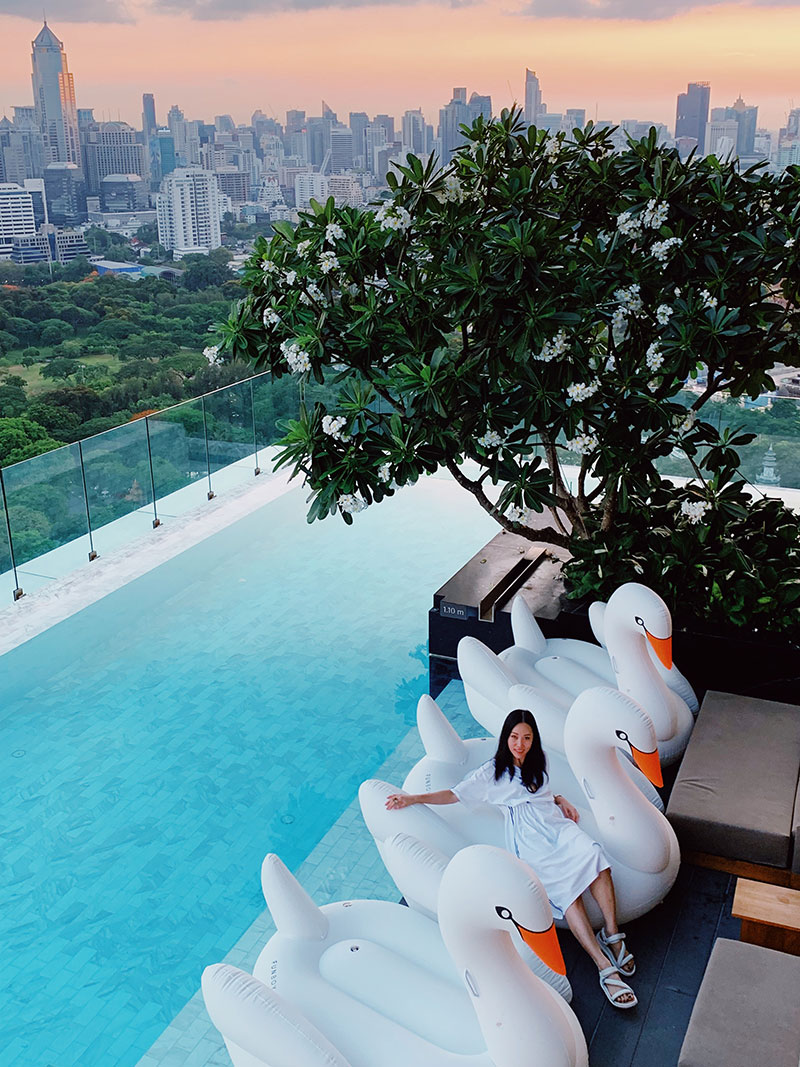 While making the beatnik spot, a Thai model "refused to put the rabbit suit and a tux on due to the heat," she adds. "So, we had to quickly find a body double—it's actually a small guy—to play to role of our running elusive rabbit."

In the ad with the dad and daughter, "we found out that our little girl riding the swan could not swim, so we had to be very careful when she was on the edge of the pool," Lefebure says. "We also kept a few wranglers in the pool, just to be safe." 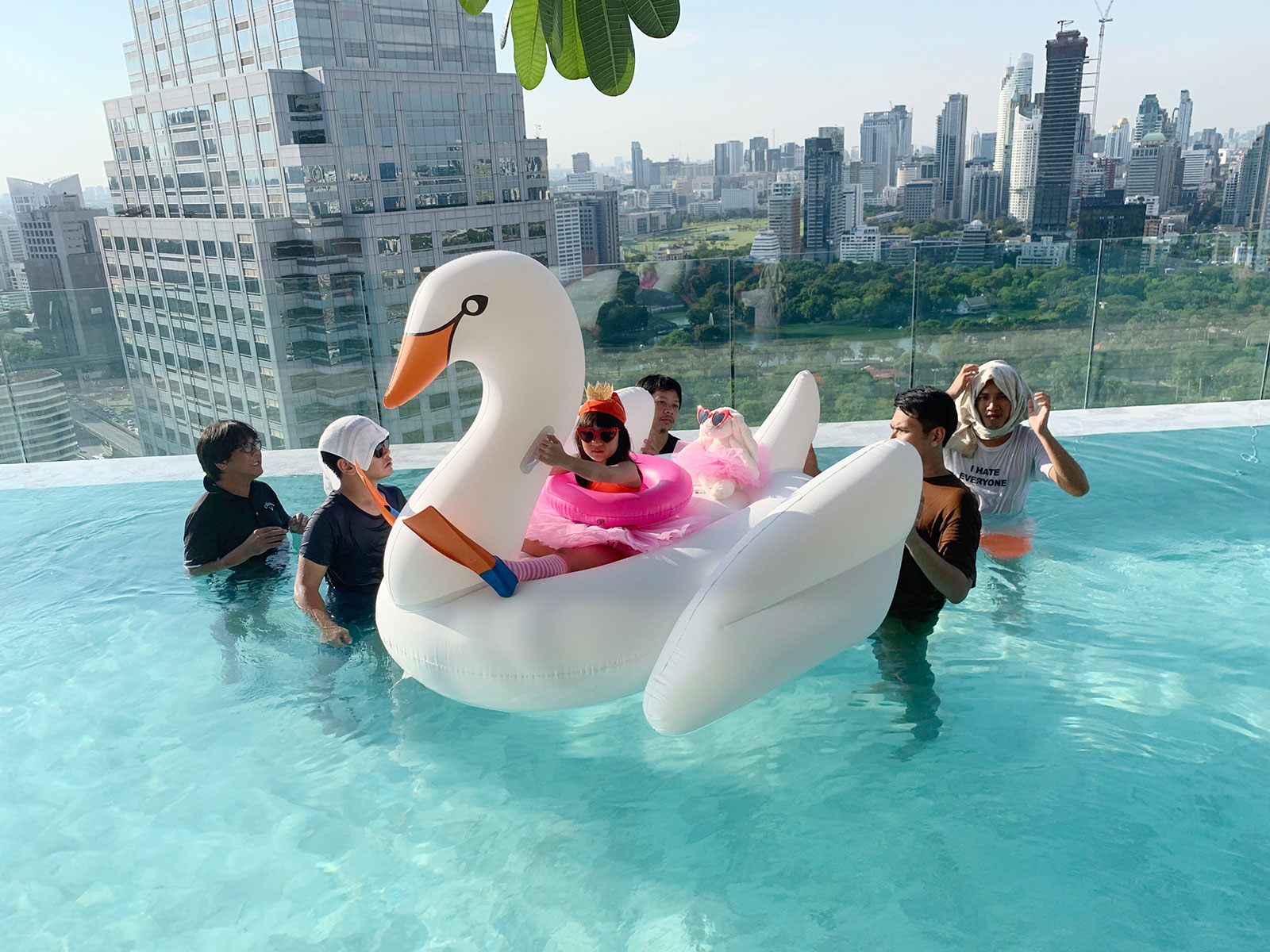 "We had to build the entire roof-deck set, as the condo roof was still under construction," she adds. "The entire crew had to wear hard hats—in 110-degree weather!—for safety. We lit the scene though dirt and dust to get the shot."

Good thing they had plenty of rabbit's feet around for luck. 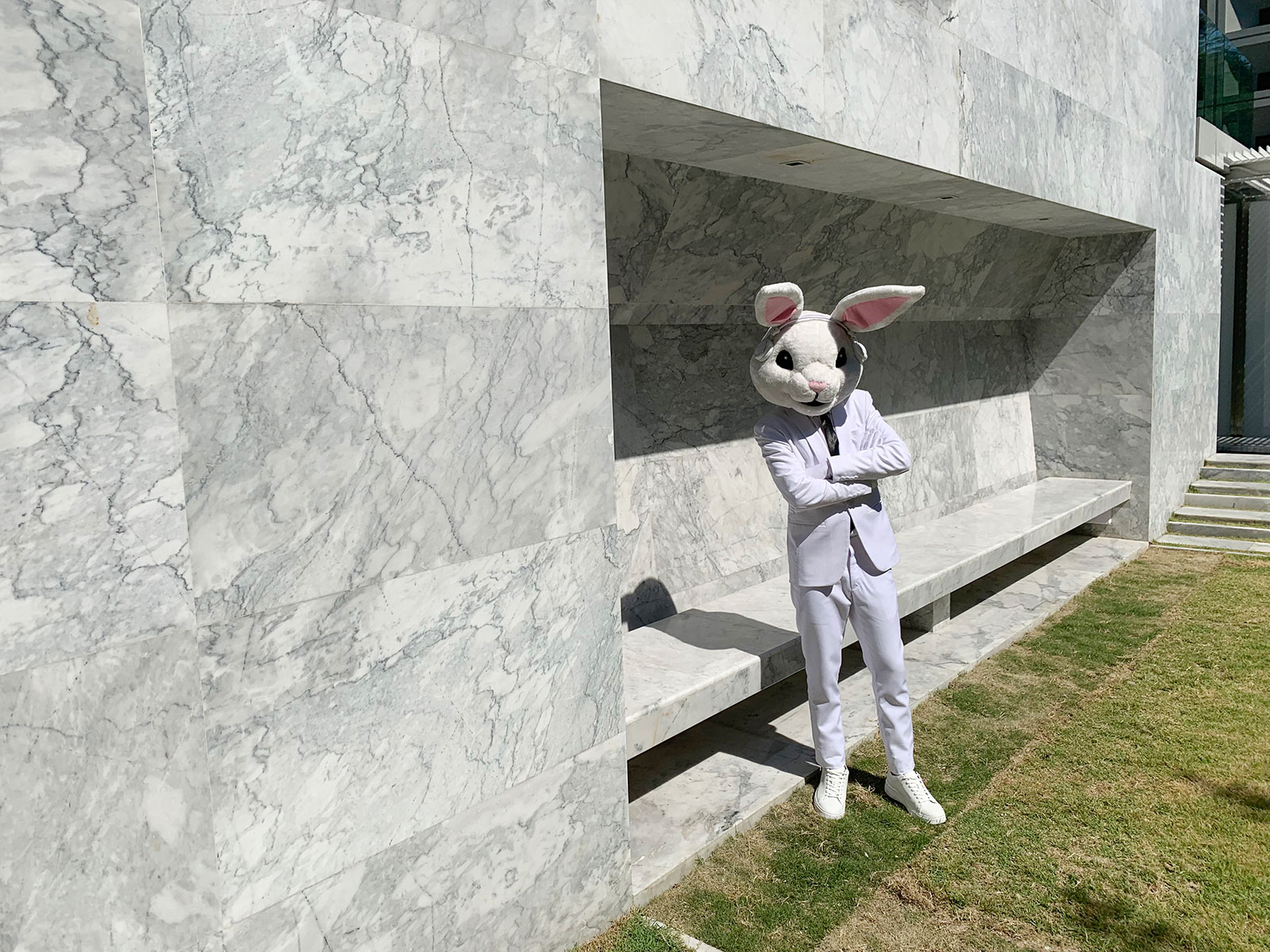