Google Takes Stock of a Tempestuous Year in Search

A film and magazine put 2020 in perspective

Ghanaian-American poet and musician Kofi Dadzie notes that "the most human trait is to want to know why" in his narration for a short film from Google that takes stock of the year in online search.

When users queried the service in 2020, they frequently prefaced inquiries with "why"—"Why is it called Covid-19?" "Why are people protesting?" etc.—seeking insight into 12 months marked by fear, uncertainty and social upheaval on an unprecedented scale:

Developed by Google Brand Studio, the three-minute video features "Together," an anthemic track from producer Peter CottonTale, created in collaboration with Cynthia Erivo, Chance the Rapper and the Chicago Children's Choir.

Google also partnered with Pop-Up Magazine for a lavish 52-page print journal designed to represent a physical time capsule of the year. Some 300,000 copies will be inserted in newspapers such as the New York Times, Wall Street Journal and Los Angeles Times. 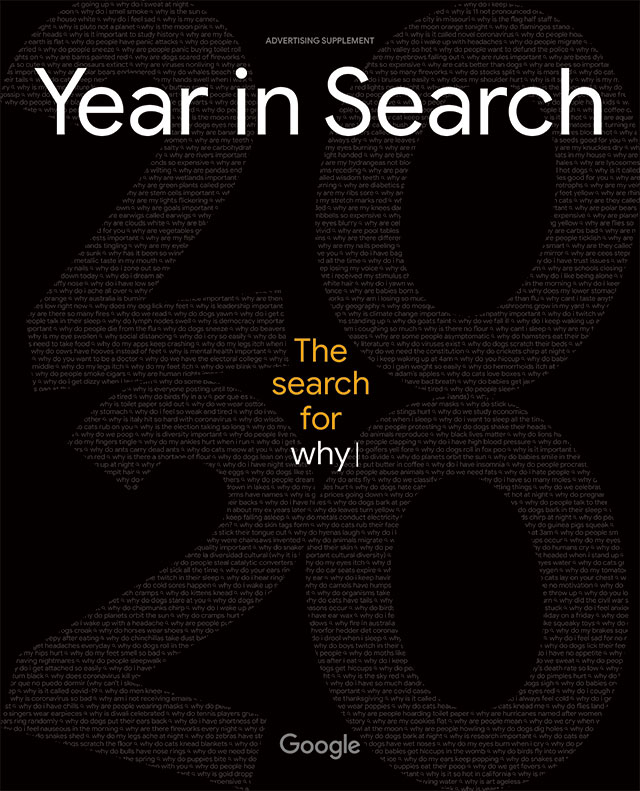 Muse: In such a bizarre year, what were the biggest surprises among the trending search stats?

Michael Tabtabai: This was the first year we saw such similarity across the globe around key issues. In any other year, searches tend to be unique to a specific location. But this year, search data reflected a world seeking to understand and cope with what was happening on a global level. For example, global searches for "how to thank" hit an all-time high, with teachers, bus drivers, nurses and doctors topping the lists. Additionally, "Black Lives Matter" and "meditation" were both searched worldwide.

By engaging Kofi Dadzie, what kind of vibe were you going for?

We saw Kofi's poetry videos on YouTube, and his energy and conviction inspired us to use a narrator in a way we hadn't before. We loved the idea of centering a voice from the next generation—someone who could guide us through this challenging year with the optimism of youth and hope for progress. From a tonal perspective, we needed to cover a wide range of territory and topics that would range from heartbreaking to mundane to hilarious to inspiring. We reached out directly to Kofi with some thought starters, and we briefed him with the daunting task of turning data into poetry. Then we gave him some time and space to do what he does best. We worked closely with him throughout the editing process to refine the work as we got closer to the final film.

The most human trait is to want to know why.
And in a year that tested everyone in the world,
WHY was more searched than ever.
And while we didn't find all the answers, we kept asking.
Some questions inspired joy, others excitement.
Some questions made us cry.
Some made us work about this spinning rock we call home.
Why were so many lives lost?
Why are still asking the same questions?
Why do we still have strength to continue?
Why are we mot defeated?
We kept going for those who showed us the way.
Why is it that this year showed us its worst, and we still found ways to triumph?
So until we get to every answer, we're still searching.

Can you talk about the original music?

We first approached Peter CottonTale. He made a name for himself as Chance the Rapper's producer, but he is also an incredible artist in his own right. We felt it was important to take a producer-first approach to crafting the music, then let the vocalists fall into place. Peter's roots in hip-hop and gospel are what attracted us. We had one creative call with Peter and knew he was the right artist for this project—the chemistry was incredible. He understood what we wanted to accomplish, was inspired by the concept and got straight to work. Within a few days we had a demo that worked perfectly, and from there we went right into production. Early in that process we invited Peter to bring vocalists into the project. We riffed on a few names, and ultimately landed on the Chicago Children's Choir, Cynthia Erivo and Chance the Rapper to be the marquee voices on the song for mainstream release. [Ed. note: Only the choir and Erivo are featured in the score of the film, low in the mix, while Chance's vocals grace an upcoming version of the track.]

Why create a magazine in addition to the video?

We've never produced a print representation of the year in search data before. This year demanded that we think beyond the digital form and create a physical time capsule of the highs and lows from this historic year. The "why" queries are great jumping-off points for discovery, introspection and understanding. We were curious how these queries related to individuals' experiences living through 2020, and the contributors to the print issue took those questions and expanded on them in beautiful ways.

Did this roundup prove especially challenging compared to past years?

We have a passionate team that really is thinking about it all year long, and in 2020, we weren't the only ones. We noticed in social media that lots of people were wondering how we'd handle a year that presented challenges like no other. We're proud to create a moment that people truly look forward to each year, and though we felt even more of a responsibility to meet people's expectations, we approached it the same way as we have in the past—be true to the year, be true to the data, be truly optimistic. This year, representation, care, empathy, understanding and optimism mattered more than ever. We saw that in the questions the world asked in 2020, and I think it shows in the film.