Inside the Offices of New Orleans Agency Peter Mayer

Accents of yesterday in a business of tomorrow

Living in New Orleans allows a unique space for cultural influence and history, and the workspace of our office is a prime example of this.

With our company's own rich history of over 50 years entwined with that of the city, the influence of community and history has enriched our company culture. Starting out, we moved into the first of three adjacent buildings in 1980, after which we then expanded to the two subsequent buildings in 1996 and 2003, respectively. The largest addition, which is our current address, was the 2003 addition—and that now houses our lobby, which embodies much of the company's new branding. The lobby was originally an outdoor space that we enclosed in order to have the impact of a large, open space for gatherings and meetings.

If you Google our address and drop yourself onto the street in front of the building, you'll see Peter Mayer signage on the front. This wasn't always there; the name was added to the outside of building in 2003 when we added on and moved into 318 Camp and renovated the space.

Prior to the company moving in, all of the buildings on the street were part of the original "Newspaper Row" in New Orleans' Central Business District, and are each over 100 years old. Newspaper Row housed almost all of the city's printing and newspaper companies. In fact, The Picayune newspaper was next door (before it merged with rival Times-Democrat in 1914 to become The Times-Picayune). The 318 Camp building still houses the façade of Eugene Dietzgen, an engineering supplies company that was founded in the late 1800s.

Although 318 Camp is now our home, we have preserved and maintained many historical and unique design and structural elements, including the pressed tin ceilings, stairwells and exposed brick walls. Additionally, the columns throughout the building have notes and history from the owners prior to us. 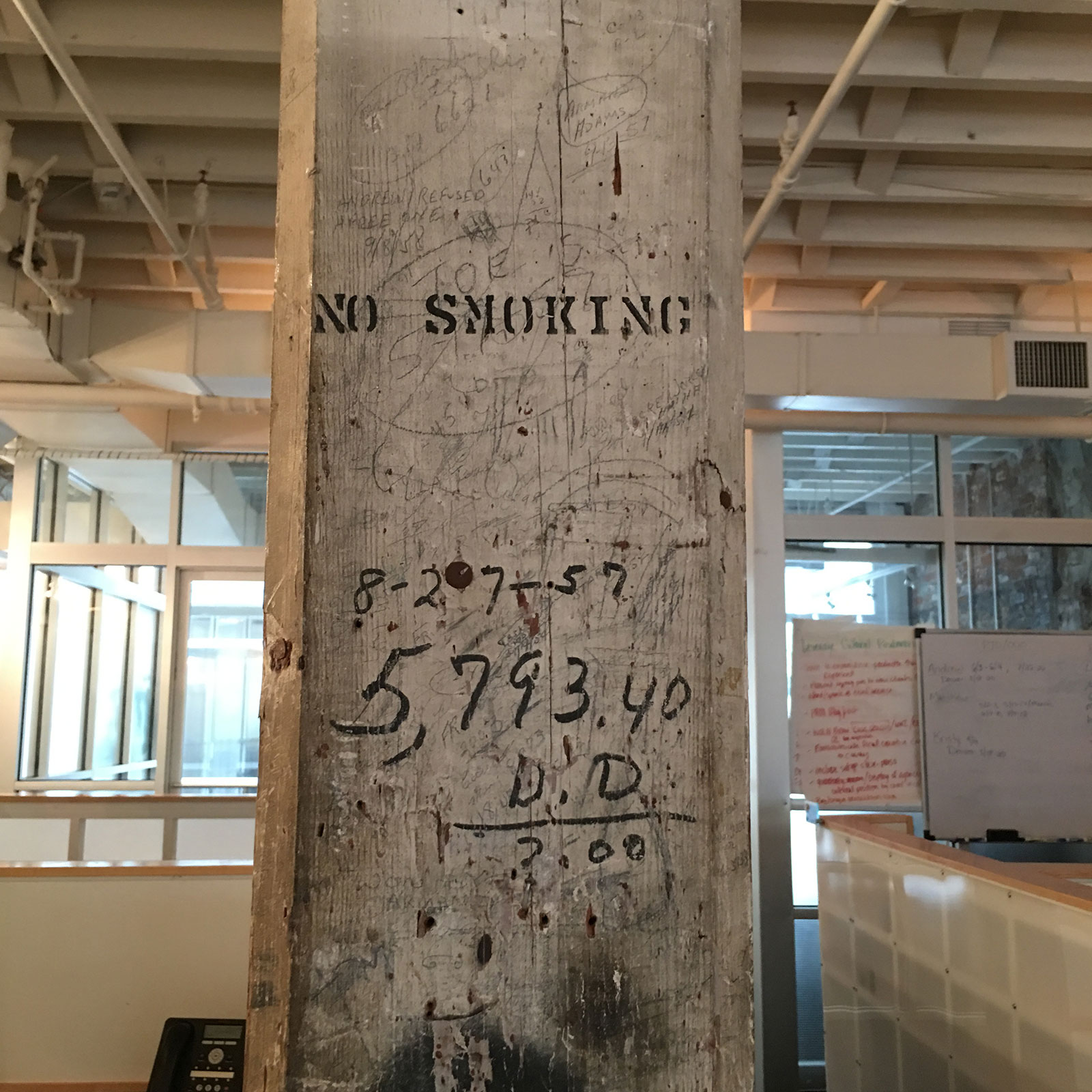 As the building embodies a mixture of old and new, our new elevator is contrasted with the original elevator in the building, which is said to be the oldest still-functioning elevator in the city of New Orleans. Before we expanded into 318 Camp, we had to either use that elevator or the stairs! Oddly enough, the original elevator has been more reliable than the modern one in the building. Although, occasionally it can malfunction if more than one floor is selected (you can only select one floor at a time). 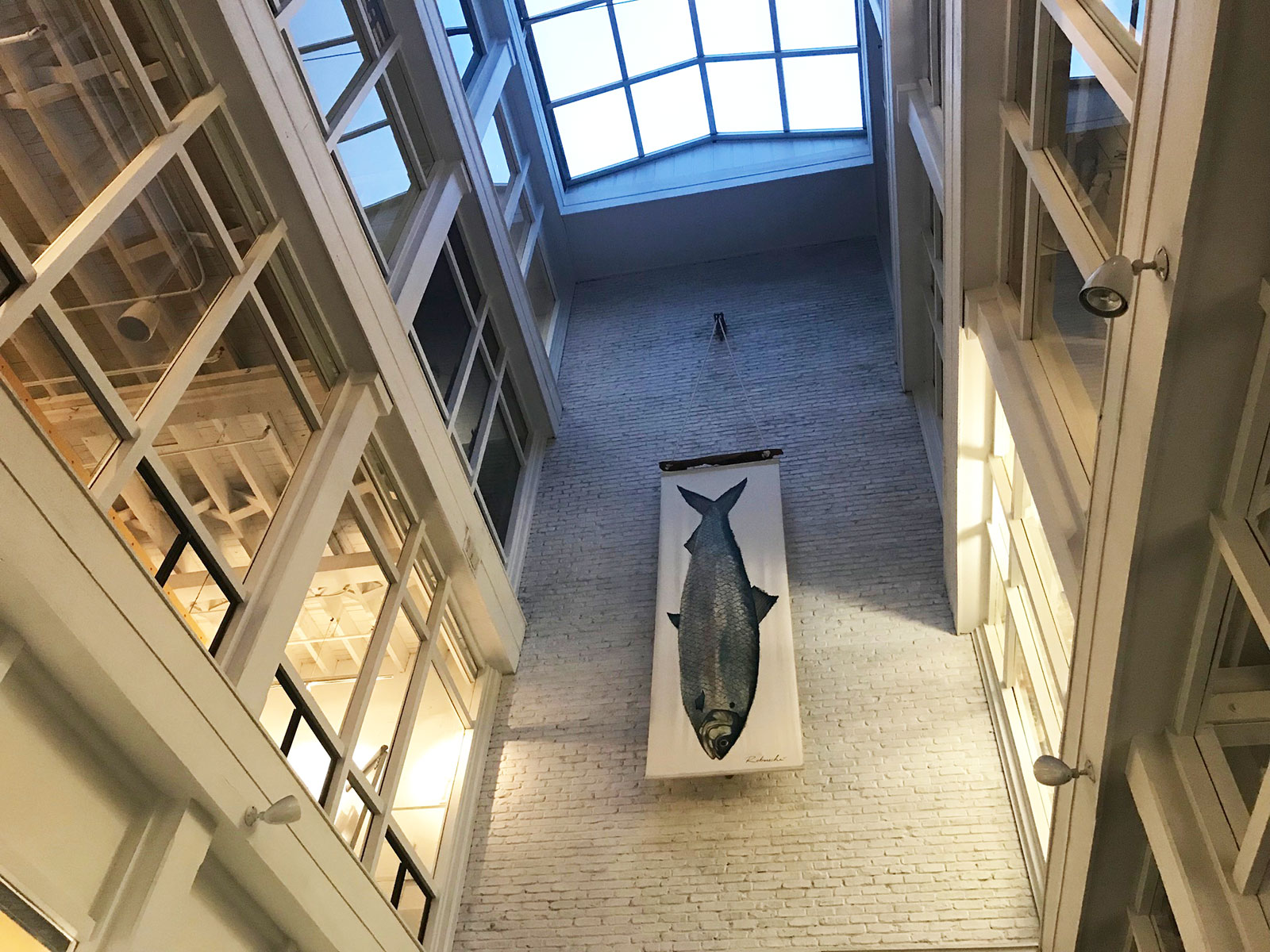 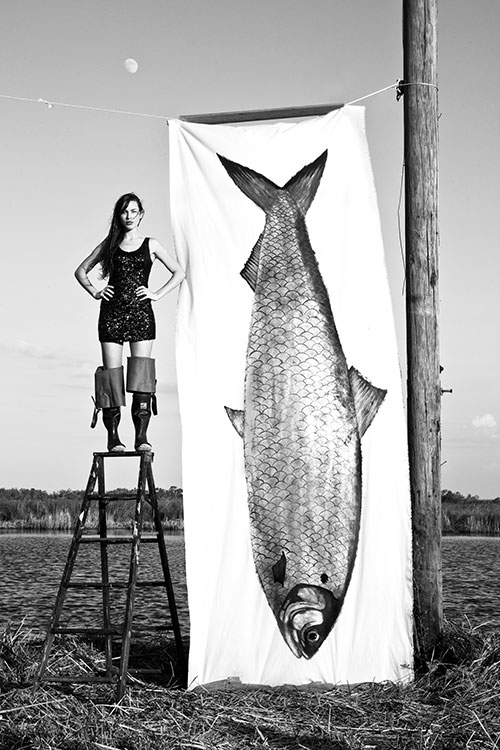 One of our many unique building elements includes our Atrium. Not only is the Atrium a spectacle, but it's also looked over by a piece of artwork, which was created by a former Peter Mayer art director, Rebecca Rebouché. She became an independent artist after asking me whether she should remain in advertising or go it on her own as an artist. I saw one of her pieces and bought it on the spot, and it now calls the Atrium its home.

Additionally, the Atrium is the current home of a sculpture done by a former group creative director, Rick Baxter, who worked at Peter Mayer before he passed away. The sculpture was previously housed at the Ogden Museum of Southern Art and is currently on loan to us.

Not just a place for artwork, the Atrium is often used by employees to meet, eat lunch and get into a new inspirational environment for thinking and brainstorming. If you're not in the Atrium but by one of the windows overlooking it, you might catch someone on the other side trying to communicate with you. Whether it's trying to distract people in the glass conference rooms or offices—there's looking, waving and fun "hellos" throughout the day, offering a fun way for both sides of the building to stay connected. 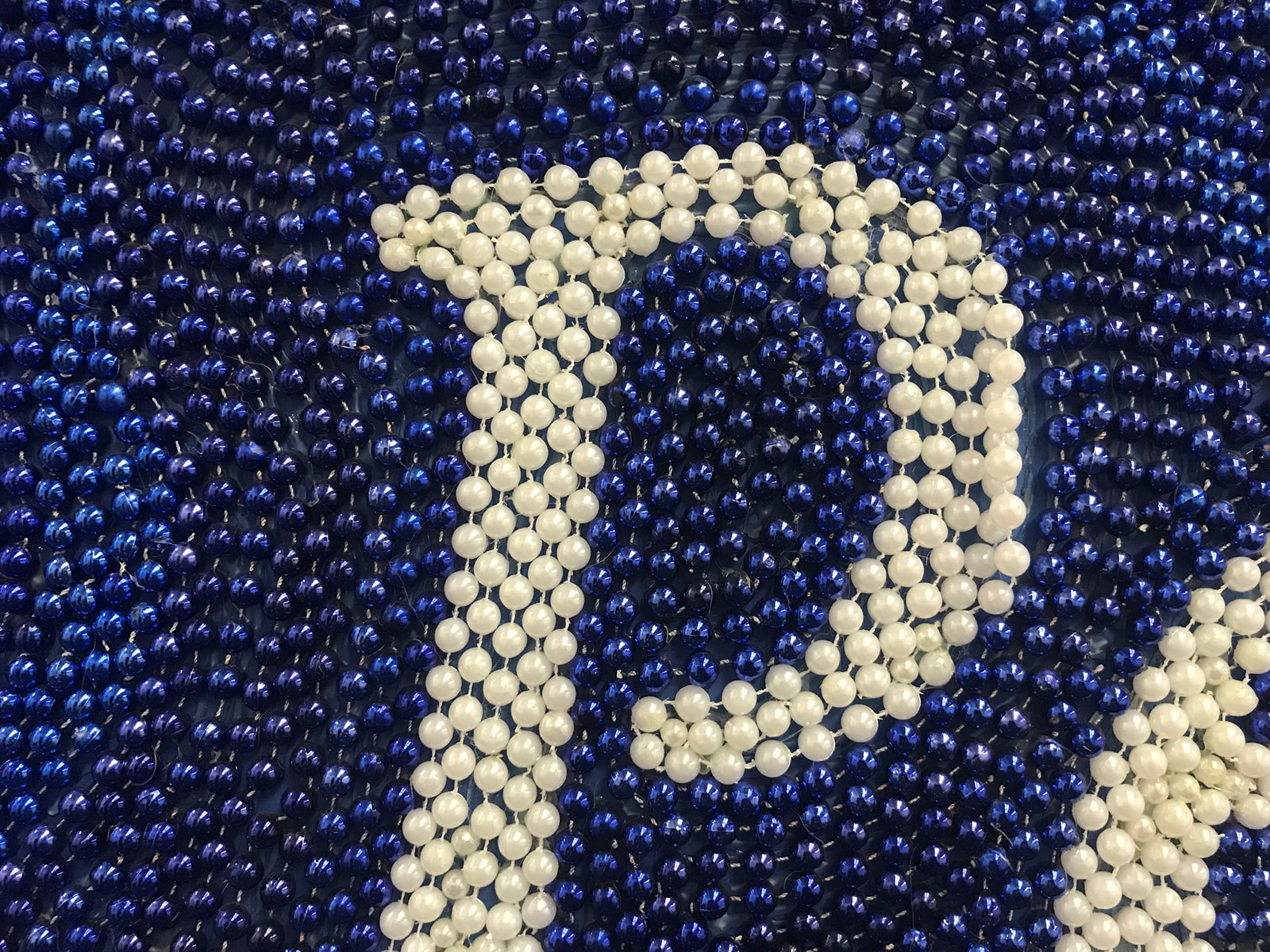 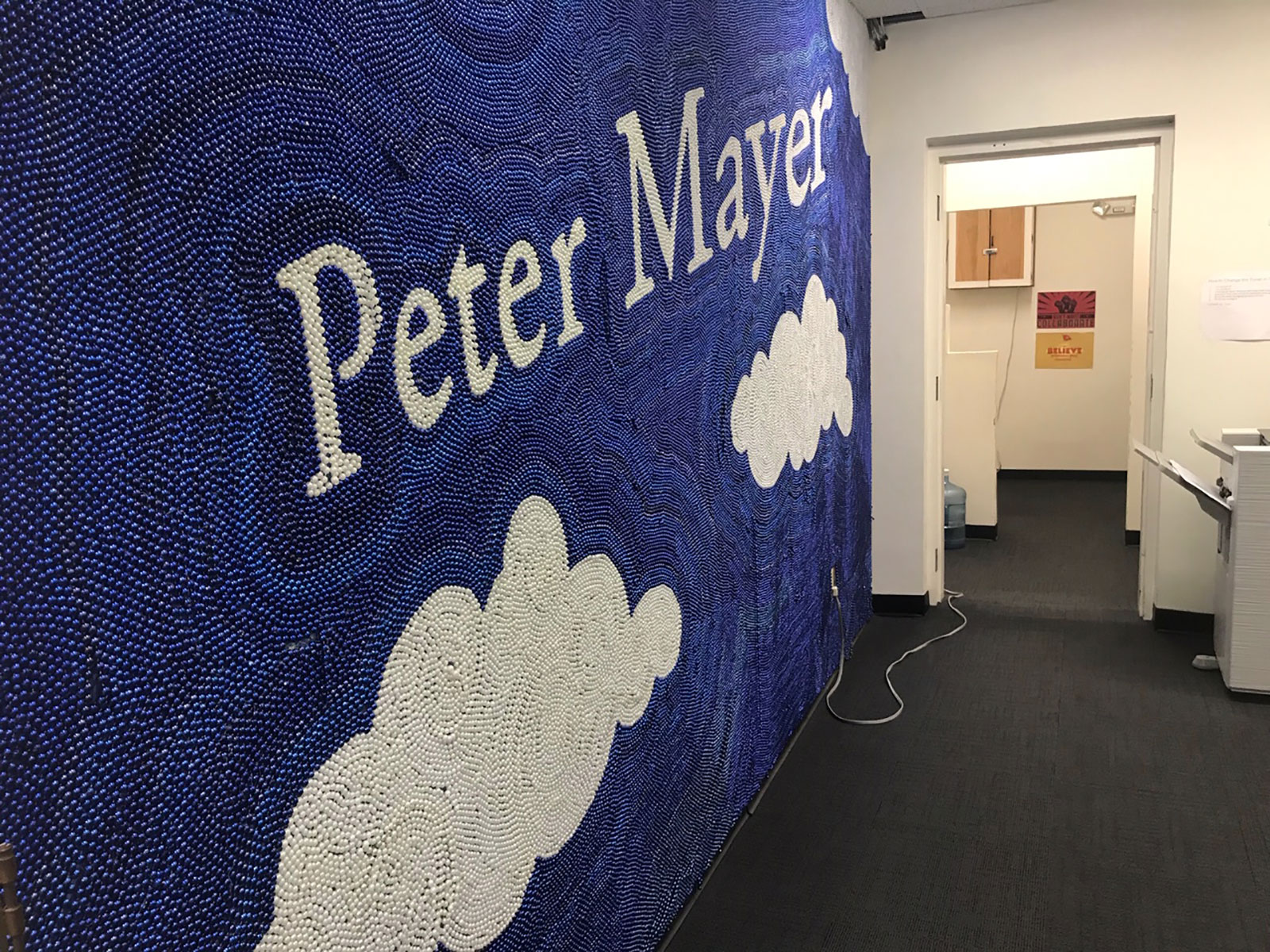 Although older buildings can have a couple of eyesores, Peter Mayer's employees always find a way to liven them. One room in particular has been enlivened with a wall of beads, which took about a month to complete. Two creative team members approached me, wanting to make the least visually appealing room in the agency better-looking. They suggested using Peter Mayer's logo at the time (it's since been redesigned) to create a wall made only of Mardi Gras beads. The team came in over a couple of weekends to complete the wall, and it contains approximately "324 dozen" beads. Since we needed consistent colors on the wall (it was a logo, after all!), the beads were purchased. 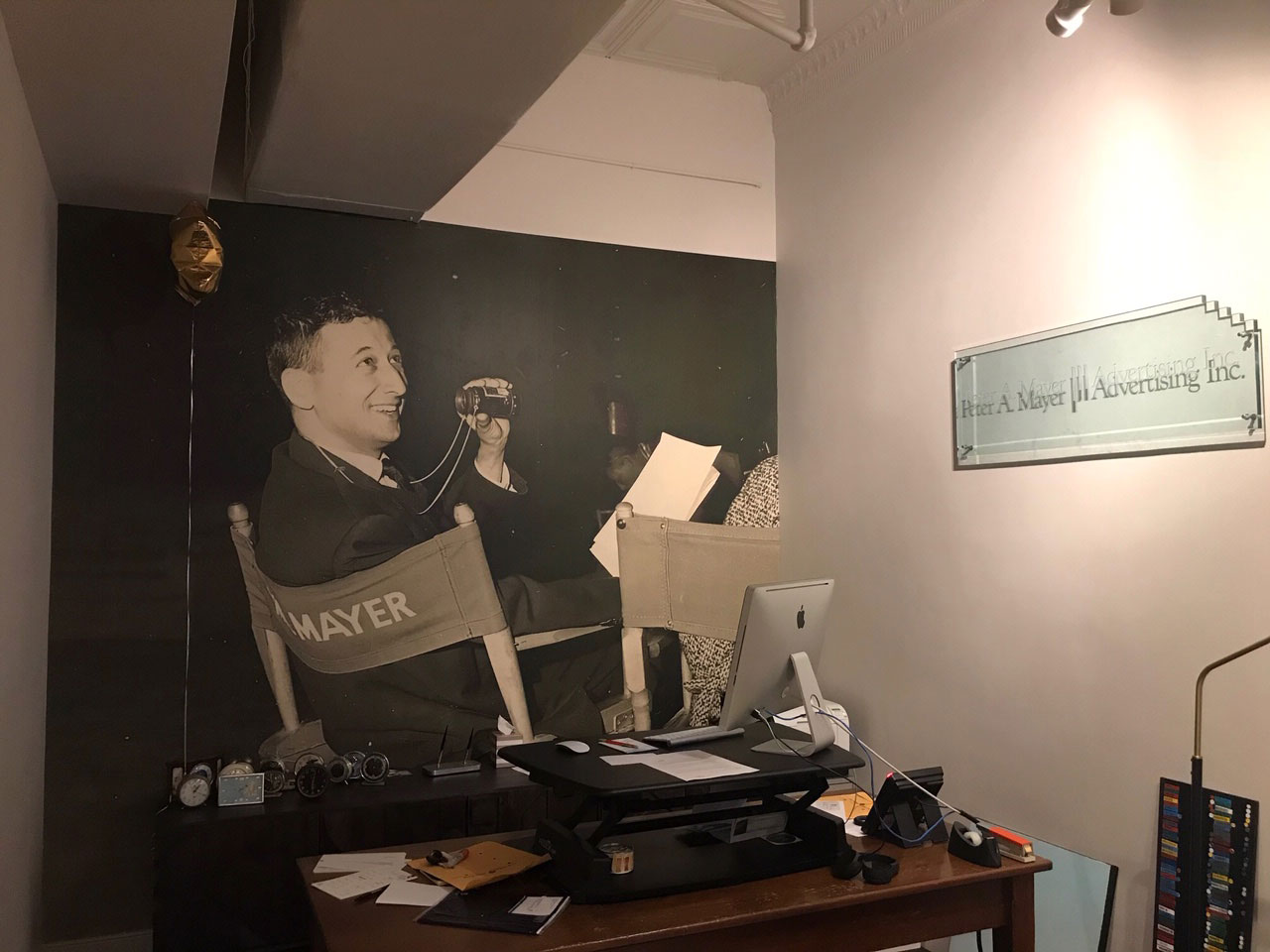 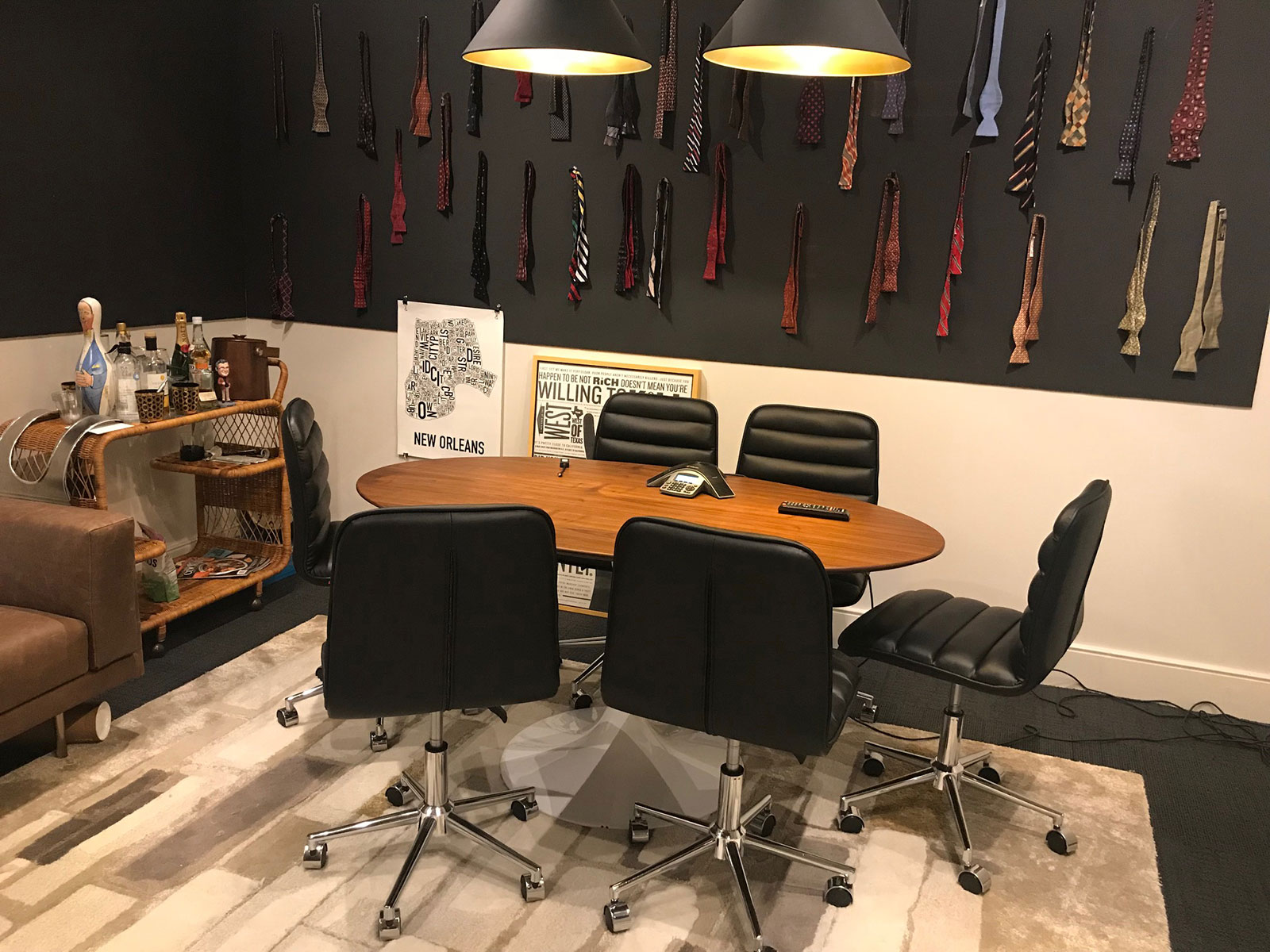 A couple of employees have the pleasure of working in unique offices. Most notably, Peter Mayer's chief strategy officer, Michelle Edelman, works in an Oval Office. When we built out the space, we conscientiously wanted curvy walls—straight walls were too conventional. Since the office was built out of the 318 Camp building, it's been the office to four proofers, broadcast producers, and now our CSO. Additionally, my own office was recently renovated with a classic, late '50s/early '60s look. The aesthetic includes a midcentury design color palette, with neutral and dark tones. I'm greeted every day by a mural of my father, the agency's founder, which inhabits the wall behind my desk. It's nice to have my dad literally looking over my shoulder when I work. We matched the décor of my office to that photo. 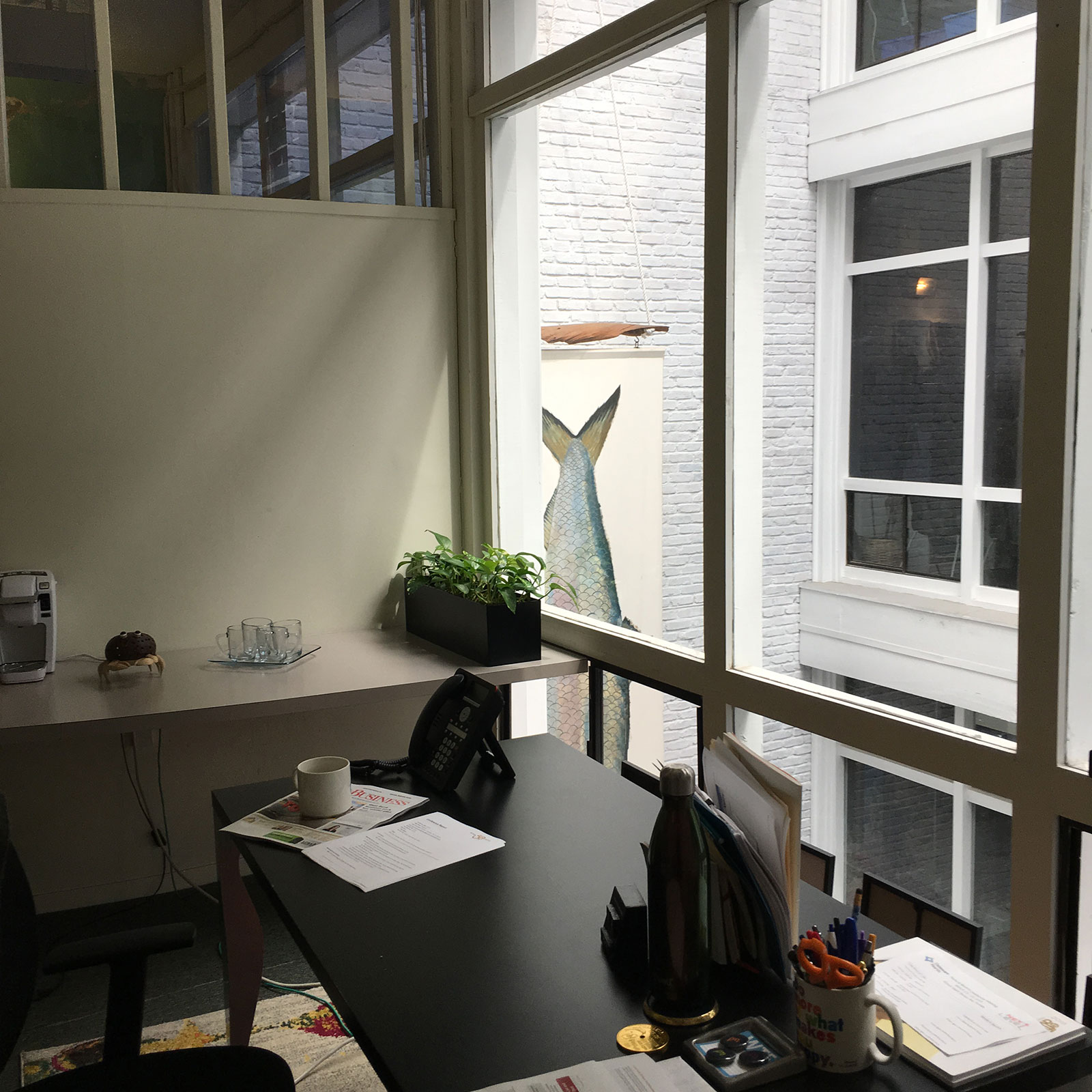 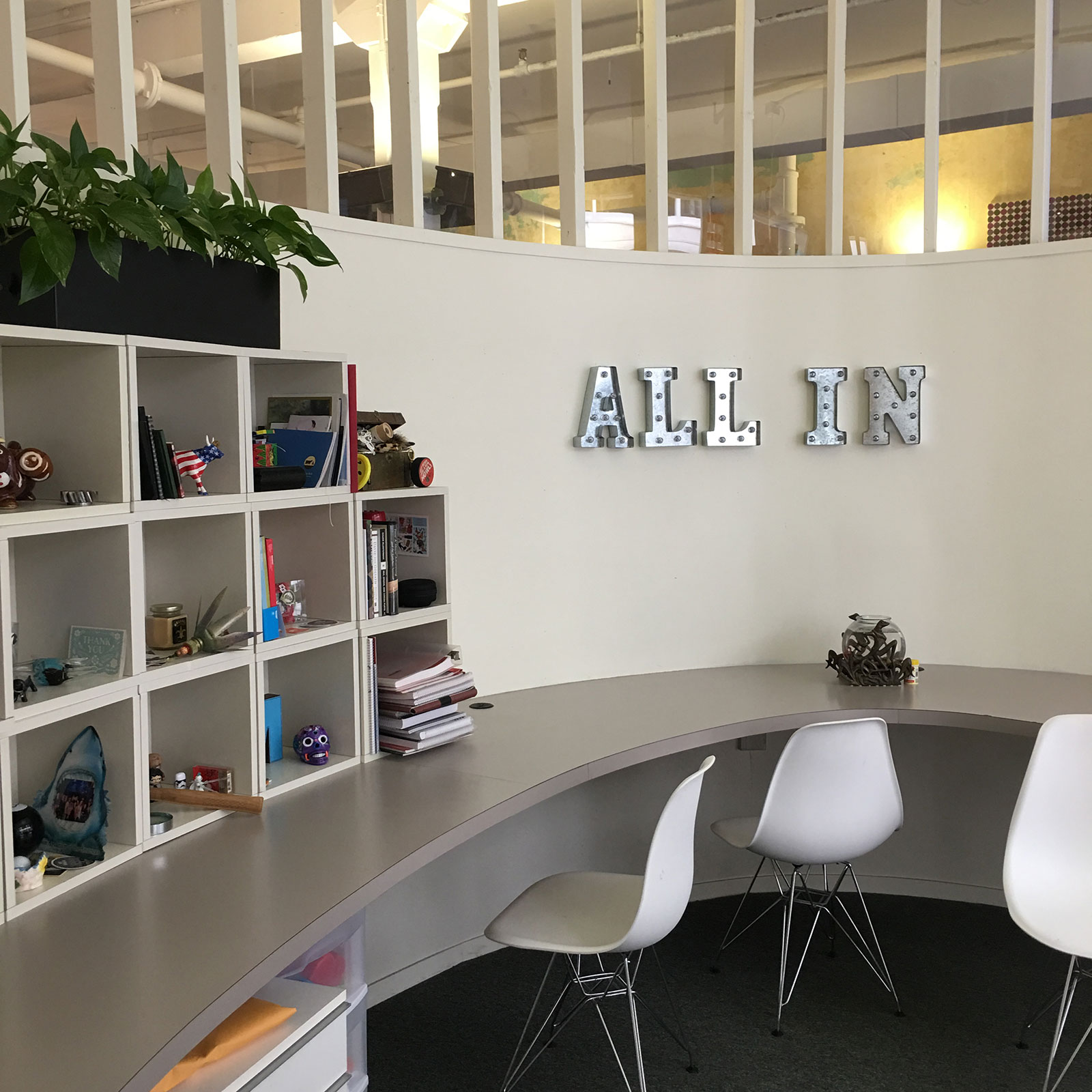 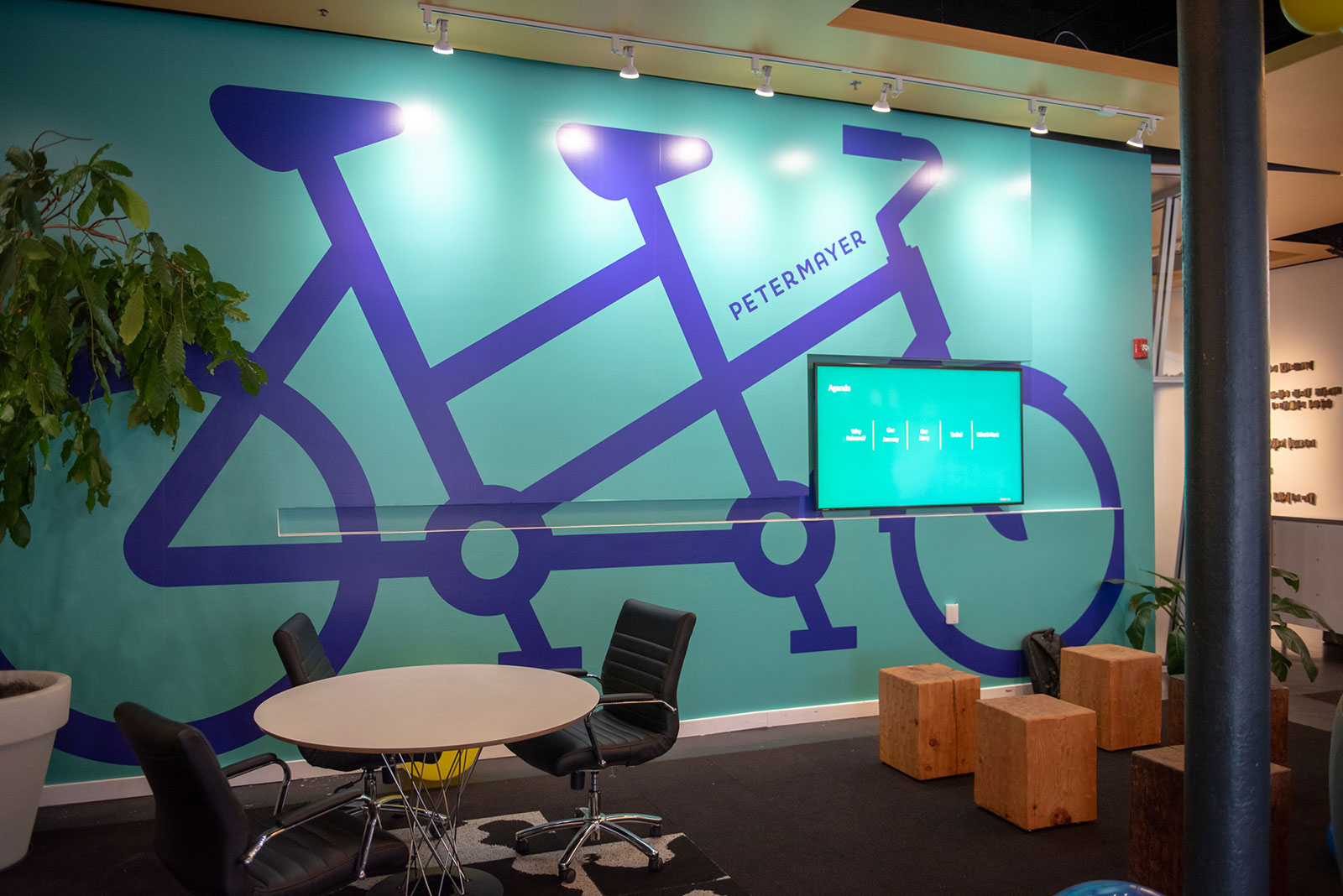 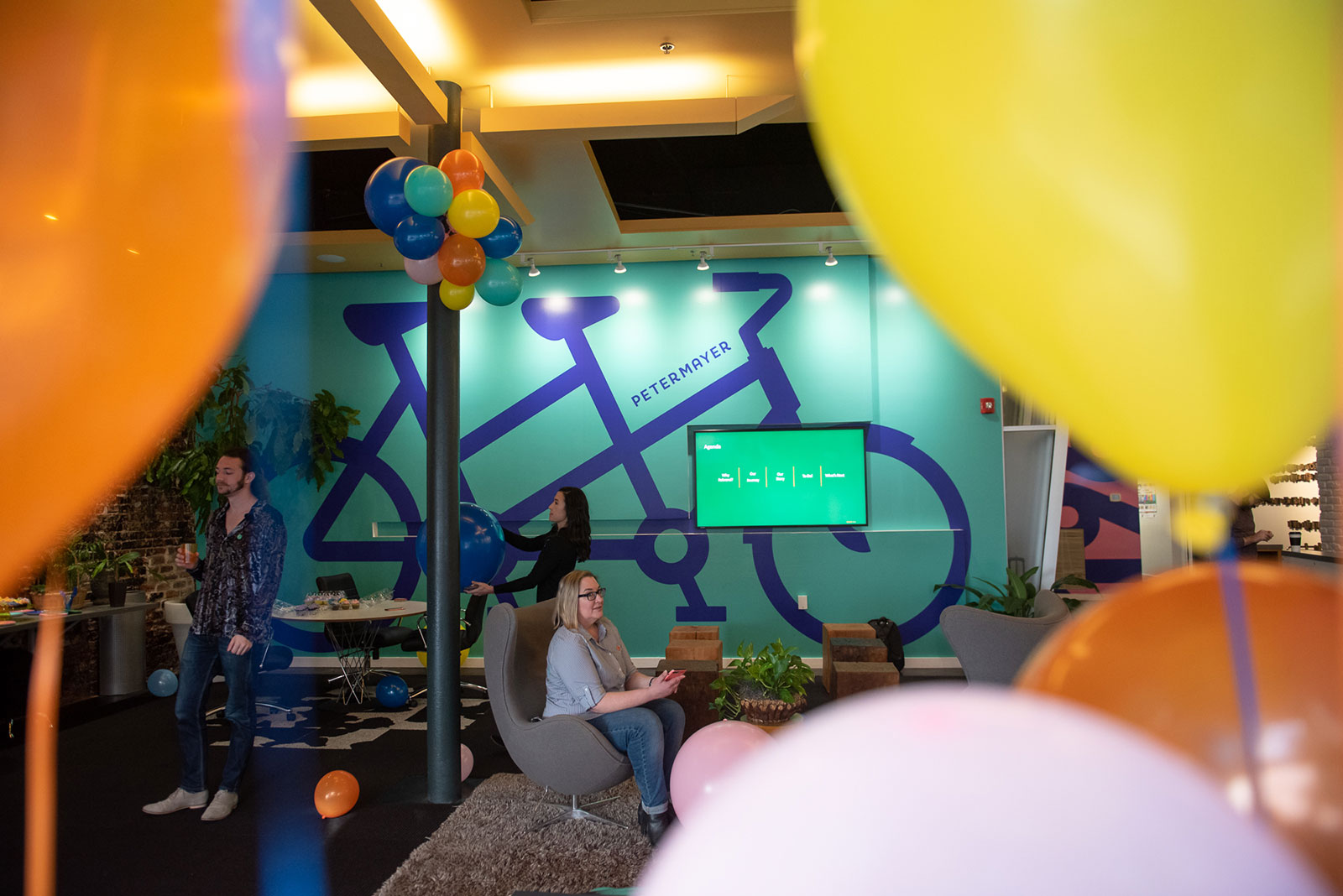 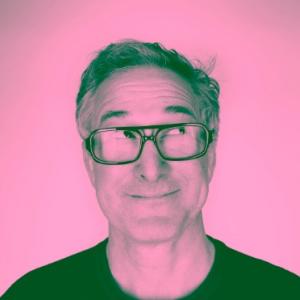