The Super Bowl champion Los Angeles Rams plot a Las Vegas heist in "On the Clock," a three-minute faux-action-film trailer from creative studio Ventureland, Prettybird director Paul Hunter and triple-Oscar-winning cinematographer Bob Richardson (Once Upon a Time in Hollywood).

Taking cues from blockbusters like Ocean's Eleven, Heat and No Time to Die, the team, led by Dennis Quaid as owner Stan Kroenke, harness computerized war rooms, helicopters and surveillance equipment to "steal" the NFL Draft.

After all, they traded away their top draft picks. Only a pulse-pounding, tongue-in-cheek caper can assure their success at the Sin City event this week. Besides, they're from L.A. Cinematic is how they roll!

Quick cuts, quips and musings on Céline Dion abound. (They decide she's probably visits the Vegas hot springs to unwind.) Deliciously over the top, "On the Clock"—that's a draft term—entertainingly fuses sports and movie tropes into primo branded content that flows at breakneck speed.

Key scenes take place in the franchise's luxe Hollywood Draft House, unveiled last week as the successor to 2021's venue in Malibu. The new location will serve as Rams HQ for various business during through the end of May.

Even if you hate football (no!) or action films (no!!), there's tons of pop-culture references, in-jokes, star power and cameos to please.

A dozen Rams play themselves, so be on the lookout for Kendall Blanton, Terrell Burgess, Aaron Donald (he's a professor type, all about "analytics and modeling"), Jordan Fuller, Tyler Higbee, Van Jefferson (in a recon van), Cooper Kupp (who intercepts a rival team's draft plans), David Long Jr., Jalen Ramsey (getting airborne by repelling from a chopper), Nick Scott, Ben Skowronek and Matthew Stafford (quarterbacking the whole plot, natch!).

Below, Rams execs Marissa Daly and Lexi Vonderlieth put us in the picture and discuss the project in detail:

Muse: Why go the faux-action-flick trailer route? It seems a propos for a team from L.A.

Marissa Daly, VP/GM, Rams Studios: Coming off of our Super Bowl win in our hometown, we had to follow up with something big that reminds everyone why we are L.A.'s team. So why not take Hollywood's lead and combine all the drama, action and celebrity of a summer blockbuster into a piece of content that shows exactly what sets us apart?

The storylines around the NFL Draft are always the same. Who's going first? Where are the quarterbacks going to land? Who's trading up? We approach things a little differently from other franchises, as we invest in veteran players in exchange for our draft capital. We haven't had a first-round pick since 2016. Despite this, over the past six seasons we have drafted players who went on to become key components to the 2021 Super Bowl winning roster, including Cooper Kupp, Jordan Fuller and Ernest Jones. So, we wanted to tell our draft story while surprising and entertaining our fans in a way that only we could.

So, this was made for hardcore fans?

Lexi Vonderlieth, Rams VP of brand strategy: What we love about this trailer is that you don't have to be an NFL insider. You can jump in and enjoy the ride. There are so many recognizable faces among the players and our actors, plus tons of cameos. We also worked in some moments specifically for our most avid fans. There are a few Easter eggs. [Note the Stafford-Kupp mind-meld bit, a nod to their in-game simpatico.]

How will the work be shared? Where will it appear?

Marissa Daly: We'll leverage all the traditional media outlets. The main film will live on Rams' channels. We will have a :60, two :30s and a :15, too. We'll also some fun with our "feature-film" approach. We will play this trailer in cinemas and have digital OOH and wild postings. We have amazing movie posters of the cast, as well as individual character posters that you'll see around the city. 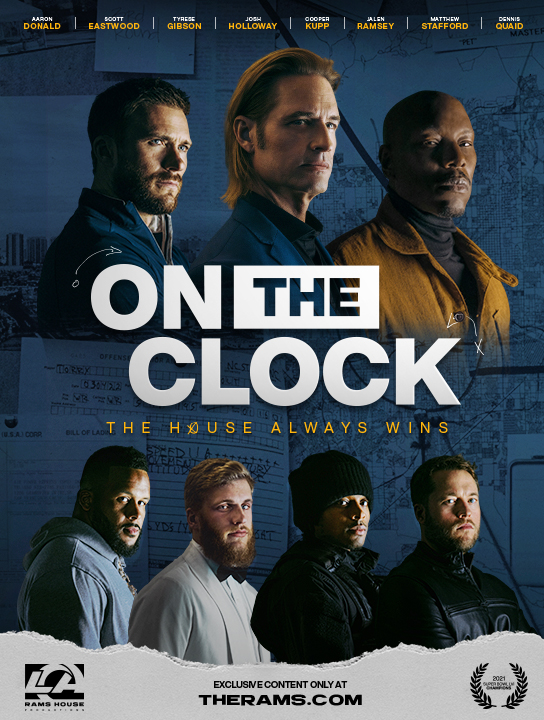 Can you describe what went down on set?

Lexi Vonderlieth: It was a crazy few days of filming, trying to fit everything in, but one of our goals was really making it feel like this was a cut-down of a full-length feature film. We wanted all of those locations and that scale of the different scenes, from the quiet moments in the owner's box to one of our star players repelling out of a helicopter.

A fun piece of insider knowledge is that almost everyone you see in the trailer who might normally be cast as an extra is actually a Rams employee. The security guards chasing Super Bowl MVP Cooper Kupp through the hallway is the Rams in-house counsel. The data analyst typing away in the opening of the computer scene is Rams CMO Kathryn Kai-ling Frederick. All the students in Aaron Donald's math class are Rams employees.

Which are your favorite scenes?

Marissa Daly: Cooper Kupp running from the security guard is a sequence we all love. The way it was filmed, with the mysterious briefcase, and Cooper pulling off his jumpsuit to reveal the tuxedo underneath—all of that was inspired by iconic action-movie moments.

Lexi Vonderlieth: The helicopter scene featuring Jalen Ramsey. The logistics to pull this off were very complicated, considering SoFi Stadium is located underneath the flight path into LAX.

Also, the players getting out of their luxury sports cars in slow motion. Van Jefferson with a blowtorch. Matthew Stafford racing out of a seedy motel. It was important to us to stay true to that movie world and create our football story within it. Our audience is so savvy these days, that anything that felt inauthentic or like a commercial would quickly be overlooked. We wanted this to be a misdirect at the highest level.

Head of Production US: Jamie Sewell