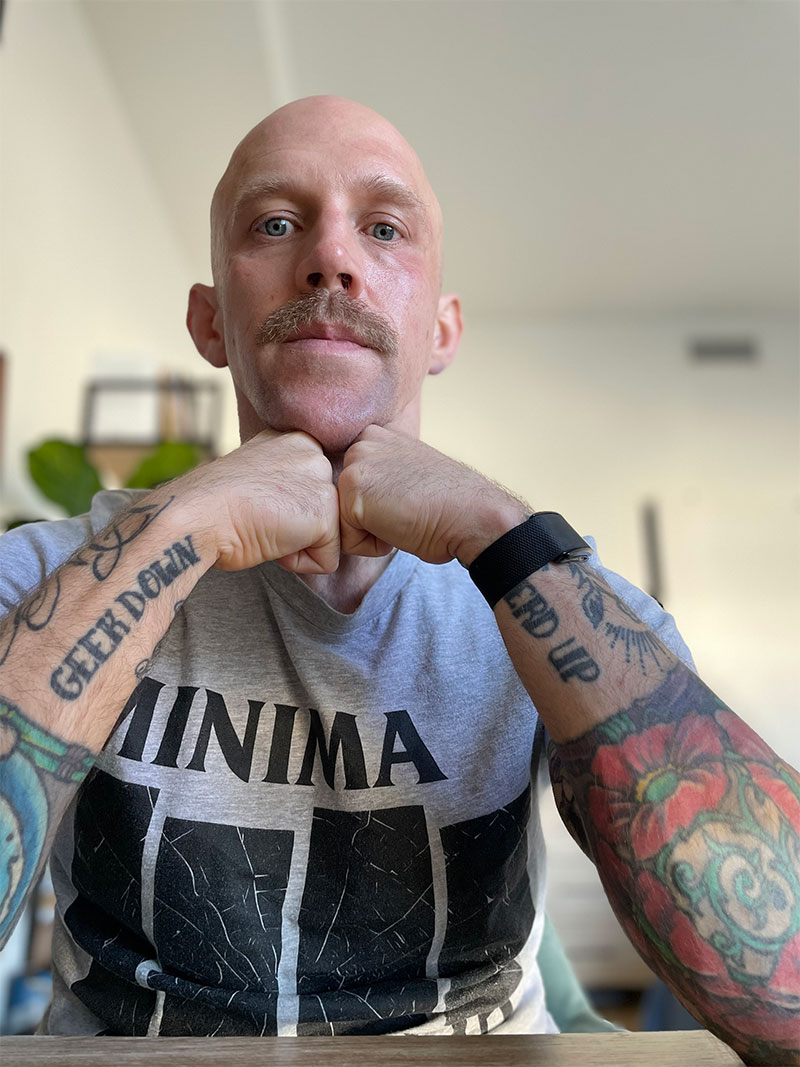 Prior to joining the ranks of the brand strategy discipline, I was principally a philosophy professor teaching philosophical psychology and critical theory. My academic specializations often led to me teaching classes that crossed over into anthropology and sociology. It's also noteworthy and relevant to my reinvention that I moonlighted as a club DJ for 20 years and it was often my primary source of income.

I got my Ph.D at a really inconvenient time—right when the Great Recession hit. The economic fallout on academia was extensive and made it very difficult for me to get a tenure track job as academic budgets tightened, particularly in the humanities. I persisted as a wandering visiting assistant professor for years, but found myself without any real sense of a future.

This was all exacerbated by the fact that I developed a pretty serious drug and alcohol dependency during this time, largely due to depression and anxiety from my waywardness. I have been sober for nearly a decade now, but immediately in the wake of my sobriety, I felt like I needed to find a new path for myself. While it took a few years to find my way to strategy, this midlife rebirth gave me an opportunity to reinvent myself. I pursued a few different angles before landing my first job in strategy at Wieden+Kennedy.

My first steps toward strategy came from having a series of sit-down conversations with friends of mine in Portland and Seattle who had careers that were very different from my own, but with whom I felt a sense of kinship. I found myself thinking, if I think like these people with regards to broader intellectual pursuits, maybe I can do what they do for a living?

These conversations, particularly those with my friends Chase Faulkner, Jake Hollomon and Joe Staples, led me to realize that brand strategy could be a home for me. They opened my eyes to the possibilities; they also opened doors for me to have conversations with the people who would eventually hire me.

The hardest pivot for me in leaving academia for advertising, that I still struggle with on occasion, was learning that I didn't need to defend every thought I had with an arsenal of footnotes and prepared counterarguments. I learned that where academia prizes thoroughness, advertising prizes simplicity and clarity. TL;DR—I'm long-winded and have learned to get the heart of the matter expeditiously.

My knowledge base and life experiences from academia and years of DJing parlayed into providing actionable brand insights nearly immediately. Once I learned the ad industry vocabulary, I was able to contribute to my team without any major barriers.

People will help you, and they like to help, too. As much as people post things on social media about how they want to be paid for their time, even for a brain-picking session, I have found many people who are eager to share their wisdom with others and seek opportunities to do something good and give back.

So many different people have inspired me as I've gone throughout the course of my career, but my three initial mentors and supporters remain the loudest voices in my head to this day: Joe Staples, David Terry and Amber Higgins. I have also been tremendously inspired by watching many former managers, co-workers and direct reports carve their own paths where they bring their full personalities to bear on the job of doing strategy: Scott Woodhouse, Carla Guy, Charlie McKittrick, Sarah Cartwright, Richard Oldfield, Michaeljon Greene, Kifayah Taha, Kim Jimenez…

There are simply too many people to name. I would also credit many of my jiu-jitsu training partners: Seeing people tackle a challenge that initially feels foreign and daunting with absolute faith that they can make it through with hard work and perseverance is enough to inspire even the most cynical among us.

It's shocking for many in advertising to hear this, but I now have so much more career stability. There have been two truly surprising changes, though. First, moving up through the ranks of agencies provided me with more chances to provide opportunities to underrepresented groups than life in academia ever would have. Second, as a cultural critic, working in advertising has given me far greater insight and understanding into how culture moves, shifts, changes, adapts and evolves—and where the levers of power lie—than 15 years in academia did.

To DJing? Definitely not full-time, though I do still play a party here and there around L.A. Teaching is a different story. I miss the classroom immensely and hope to find opportunities to teach regularly again, though not as a full-time professor.

I'm pursuing my MBA for a number of reasons, but a primary motivator is that it has the potential to open up different doors for me as an educator, where I can share my knowledge while continuing to work as a strategist. For now, I love the work we're doing at Dagger. I'm fortunate to work with people who encourage me to bring my distinctive and occasionally unorthodox approach to brand thinking to work with me unfiltered.

"Constructive Summer" by The Hold Steady.

I think of myself as a cultural critic who is good at identifying solutions to problems, not just diagnosing their origins. Decades of Brazilian Jiu-Jitsu have given me a lot of practice in solving physical riddles in real-time when there are (hypothetically) dire consequences on the line. My years in advertising have trained me to move beyond the purely diagnostic lens encouraged by academia.