John Oliver as the hook for brand-level synergy 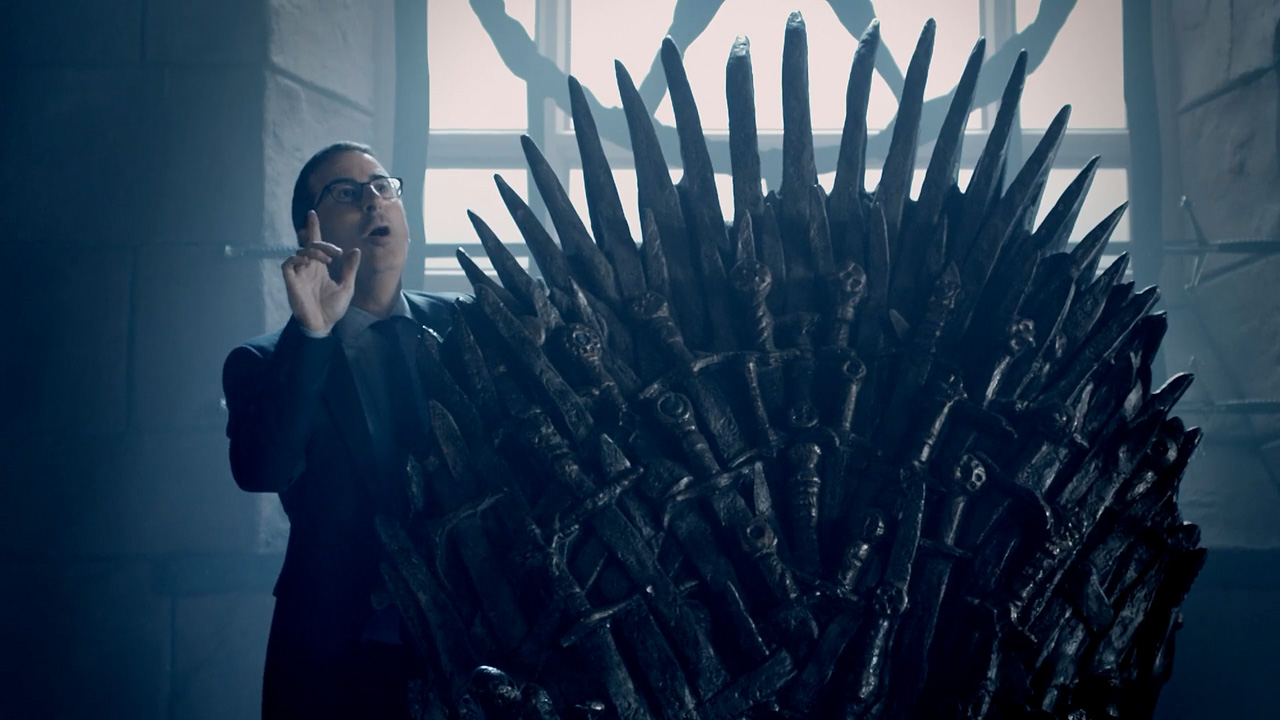 We've had a longstanding and collaborative relationship with the HBO marketing team, but our 2017 promo for John Oliver's Last Week Tonight stands out as one of the most memorable. Here's how a show launch evolved into a viral HBO brand campaign.

In 2016, HBO marketing shared a simple promo premise they discussed with Oliver and his executive producers: What if John shows up on the wrong HBO show sets?

We immediately recognized the comedic potential and brainstormed with HBO various scenarios to bring it to life. We explored the list of their returning hit shows for inspiration and cameo ideas, sharing example scripts and boards, helping the marketing team engage the larger HBO team to explore approvals from other showrunners and availability of talent.

Luckily, Last Week Tonight was a much-beloved show among fellow HBO celebrities. In the end, the stars aligned—figuratively and literally—resulting in three of HBO's biggest shows signing on: Game of Thrones, Silicon Valley and Curb Your Enthusiasm.

With the show list set, we got to work on creative development, a director's treatment, and most importantly, production logistics. We knew our Game of Thrones intro wouldn't work unless we matched the show's massive production value, so our production designer recreated the iconic Throne Room from the show's original set schematics. Built in three days over Thanksgiving in L.A., we replicated the exact architecture, stone textures and even the lighting plan. Ironically, it took longer to build than to use, with our crew dismantling this majestic set the day after shooting.

For Silicon Valley, we placed John in the Pied Piper house with Dinesh, played by Kumail Nanjiani. Kumail was a huge fan of the show, so it took some encouragement for him to fully embrace the premise: to mercilessly insult John. This unlocked a hilarious flow of on-set improv, with the remaining challenge being to stifle our laughter and not ruin takes. Much of what's in the edit is from that improv.

For the final Curb Your Enthusiasm segment, we shot John's walk-and-talk with Larry David on the Sony backlot. To enhance Larry's informal, no-nonsense presence, we gave him a blue popsicle to eat while one-upping Oliver. What we didn't anticipate was that running dozens of takes for improv, combined with the Los Angeles heat, meant Larry ate two entire boxes of blue popsicles, with the hair and makeup team having to stop periodically to address his blue lips.

The Last Week Tonight promo was released in early January 2017. With the show's popularity (and Emmy wins) rising, combined with iconic HBO sets and hilarious celebrity cameos, the spot had all the elements to grab the attention of fans. And by leveraging the social channels of the shows and talent across all four titles, HBO turned it into a de facto brand marketing asset.

The promo quickly went viral, racking up over 25 million views across social media, with over 5 million views on YouTube alone. The response was overwhelmingly positive, with the top YouTube comment declaring it "one of the best promos for a TV show I've ever seen." The spot also went on to win a litany of awards, including Clio Gold for Entertainment and TV/Streaming Comedy; Promax Gold for Funniest Promo, Comedy Campaign, News Program Campaign, and Set Design; and a Golden Trailer Award for Best Comedy in TV/Streaming.

For MOCEAN, it was one of the most creatively satisfying client collaborations we've ever had and helped us become a go-to agency for custom content involving our clients' A-list stars and showrunners.

This content is presented by MOCEAN, a supporting partner of the 2021 Clio Entertainment 50th Anniversary Celebration, happening Dec. 14 in Los Angeles. Tickets to the event are on sale now.