The IMDb Top 250, and How I Escaped the Algorithm 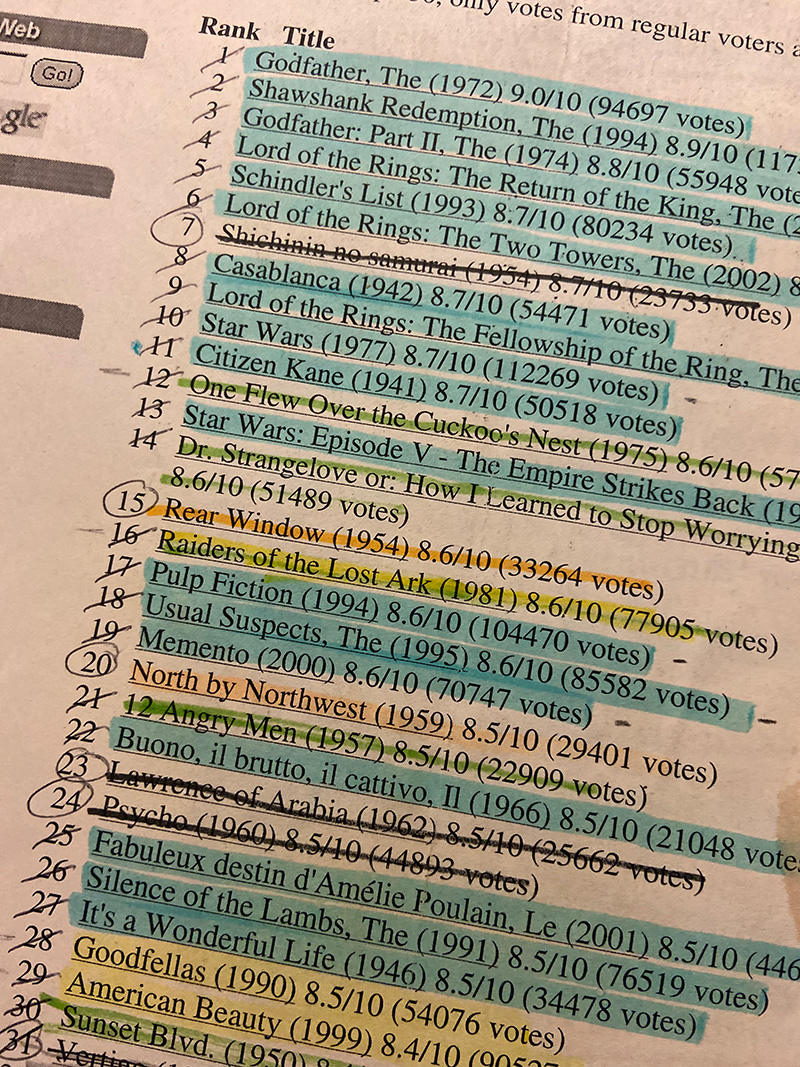 When I was a teenager I was obsessed with lists. Top 10 lists, best-of lists, year-end lists. Movies, music, books, video games … if I was gonna experience something, it better be on a list. This was the internet's early days—late '90s, early 2000s—so most of these lists were printed on paper somewhere, and were decided by a person or a small group of people. I would buy—or read, while sitting on the floor at CVS—all the year-end magazines: Rolling Stone, Spin, EW, and spend hours watching the VH1/AFI/TCM best artist, best album, best movie, best whatever of all time documentaries, writing down the results and going out on my bike to find these exceptional pieces of art.

I can't remember how I came upon the IMDb, but I know (thanks to my profile page) that I was around 15 years old, peak list-seeker age. Instantly I was hooked. I spent hours clicking through the endlessly hyperlinked web of actors, directors and movies. And it had, of course, A LIST: the IMDb Top 250, a living, mutating, constantly changing list of top movies that reflects the votes of the millions of IMDb users. It became my goal to watch everything on the list.

I asked my dad to print the full list at his office, and highlighted every one I'd seen, around 20 or 30. Through the years I would mark and highlight movies I'd seen, the ones I wanted to watch next, which I liked most, and least. I would bike to my local library or Blockbuster and flip through the DVDs and VHS tapes looking for whatever movie THE LIST said I had to watch next.

When I invited friends over to watch a movie, they would ask if it was a normal movie or a "Joaquín movie," their code for the old/foreign/weird movies I would sometimes spring on them. I loved Super Troopers and Happy Gilmore as much as the next guy, but sometimes the list says you have to watch The Seventh Seal and be absolutely confused for a few days.

That confusion led to curiosity, and I would read up through the forums (RIP, IMDb boards) and articles, learning about what people were seeing in what was, to teenage me, a pretty boring movie. I would watch them again, trying to see things differently. I started to understand theme and structure, framing and blocking, editing and narration. Sometimes my opinion was unchanged, but I always tried to understand what so many people had seen.

It gave me a goal, but most important, it gave me variety. In my early list-seeking days, movie lists were complicated—either too shaped by a single critic's tastes or too biased towards an era. Roger Ebert had some wild takes, and the AFI's list was all about the '50s and '60s. Not this list. You get Seven Samurai and 8½. The violence of City of God (No. 24) sits right between It's a Wonderful Life (No. 23) and Life Is Beautiful (No. 25). It has The Terminator and The Pianist. Toy Story and Das Boot. Monty Python and the Holy Grail and Andrei Rublev.

And this is what keeps bringing me back to the list to this day: It defies the algorithm.

What should I watch, what should I listen to, what should I read, are still some of the important questions in my life. But today, opening any movie, music, or book service will reveal a cascade of carefully selected bubble-reinforcing options; "stuff you might like," according to some code, which reminds me that I'm just another predictable consumer. The IMDb Top 250, with its millions of voters of every age and country in the world, breaks that loop. It's just what people like. Avengers and Ingmar Bergman, Miyasaki and The Dark Knight, all rise and fall every day as tastes change. It includes movies from dozens of countries, from every genre, and every decade since the 1920s.

The list, of course, is flawed. New movies quickly shoot up the rankings as fans rush to see them on opening day, only to fall spectacularly as the less interested finally get around to watching them. There are voting campaigns, certain genres are overrepresented, and there is recency bias. I certainly don't like every movie I watch; I have given my share of 1s and 2s. But all in all, it's always a great way to find something you might not have looked for. It's led me down rabbit holes of Kurosawa and Kieslowski and Michael Mann, and to the mindblowing visuals of Spider-Man: Into The Spider-Verse. It also gave me something to do during the quarantine. I finally got around to watching The Passion of Joan of Arc (loved it) and Gangs of Wasseypur (not for me) and 20-some others, as I finally completed the list. Since the list keeps changing, I'm currently seven short of having seen all 250, but I know that when I want to break away from the obvious choices, it'll give me something eye-opening.

I know I am not alone in my obsession. There are entire websites dedicated to the history of the list: movies that are no longer on the list, the ones that have been there longest, the movies that have reached 1st place, etc. The site now even has a feature to hide the movies you've seen, to give completionists like myself a clearer view of what's left to be done.

My IMDb profile says it was created in February 2002, which means my obsession has lasted 20 years, well over half my life. It has shaped my movie-watching habits for two decades and has probably been an important reason why I direct today. Most important, it reminds me that the algorithm only works to narrow our interests, keep us comfortably in our bubble. Sometimes, the things we love can come from places we never thought to look. 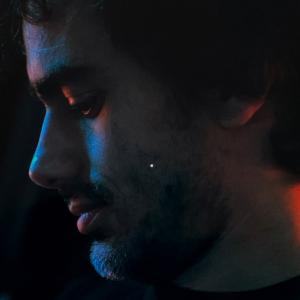 Joaquín Güiraldes
Joaquín Güiraldes was born in Argentina and moved to the U.S. when he was 12. He began his career editing at Argentina’s renowned Argentinacine and then went on to edit at David The Agency, where he developed a passion for directing. He is repped for commercials in the U.S. by Rocket Film.
More from Joaquín Güiraldes