9 Strategies for Naming a Brand

The icing on the cake

Over the last several months, I've had more virtual catchups over FaceTime than I can count. As I listen to my friends and family share what's been keeping them busy during self-isolation, it amazes me how many of them aren't wasting their time. My friend Rory is finally getting the chance to transform his automotive and travel freelance work into a full-fledged content creation agency. Posy has taken a leap to monetize her cute cartoons into greeting cards. Another friend is turning her love for arts and crafts into an e-commerce platform. It goes on...

The worldwide pandemic has left many people feeling as if it's the end of our lives as we know it, whereas for others, it's paving the way for a new beginning—allowing people to take a step back and focus on personal or passion projects that our once-hectic lives didn't have "time for." I'm deeply impressed by their get-up-and-go attitude. Apart from gloating, I know they're sharing their projects and ideas with me in the hopes for guidance and advice. Because aside from my big weekend plans, consisting of binge-watching daytime television, it just so happens the only thing keeping me sane and stimulated right now in our "new normal" is my love for, dare I say it … my job.

I work in the strategy team at the New York studio of Pearlfisher, a leading global brand design agency. If there's anyone who understands the weight of a name, it's us. Chinese tampons, horse food, five-star hotels—you name it, we've named it. So, it's no surprise that my friends are looking at me to help with what I like to call the icing on the cake—a brand name that can take their vision from idea to reality.

To us, a brand name is a compelling story, reduced to its smallest, but most engaging form. It's your first shortcut as a brand to help articulate who you are and what you believe in. Crafting one marks the holy grail of brand design. How to make it immediate yet still have a deeper meaning? How to get to the core of what you do, yet still leave it ambiguous enough to allow for brand development in the future? How to be clever enough to get through the toughest trademarking checks and make sure that you've got something unique (and something that you actually like)? The ultimate aim is to move from corporation to lifestyle and to transcend the category (e.g., Hoover or Google), where your name becomes synonymous with the product or service.

Navigating these questions is part of the bread and butter of our business, and my friends are eager for tips. So, after reluctantly putting daytime television on hold, I've jotted down nine ways to help you craft the perfect name for your new business, idea, side hustle or corona distraction.

You don't have to determine the brand name purely in the product. Push it further. Ask yourself what the main point is that you want your consumers to understand (that you're grounded, authentic, established, jovial, etc.) and push that. Think of it in three stages: the functional benefit of the brand, the emotional purpose that comes from this, and then the figurative associations of the two together. Tinder is a great example. From the functional "we're an online dating app" to the emotional "we bring people together" to the figurative "we create sparks," which takes us to "Tinder." Slack and Casper reflect a similar theory.

Think of what the sounds in the name convey as much as the literal meaning.

The sharp click of a T, or the pace in a "sh" can give a powerful sense of something that adds to or elevates the meaning. Explore words that are fun to say and that roll off the tongue. Think of the music of the name, how it sounds and what those sounds generate before the true meaning of the word is understood. Agent Provocateur immediately cues French sensuality without having to overtly express it. The literal translation is "someone who encourages you to break the rules," yet even if you can't speak the language, the sound evokes an idea in your mind. Like the lingerie that the brand creates, the name leaves something to the imagination. It's provocative and enticing in equal measure, and even better, it's sexy to say.

Always root your consumer at the heart.

The fact that Maison Kitsune isn't easy to say works in its favor. That definite complexity targets a consumer who doesn't want everyday, easy fashion that's for everyone. They want to feel elevated and separated from the rest. As soon as they understand the meaning and can pronounce it, they're locked in because they get it. If you're trying to connect to a more cautious consumer, don't go for something they can't pronounce. They're less likely to go for something that might make them embarrassed because they can't say it properly. Chipotle had to invest in an ad campaign to show consumers how to pronounce their Mexican on-the-go food brand.

Some of the best names seem obscure at best, and crazy at worst, when first contemplated. Yet due to the sheer number of brands and businesses being created every day, trademarking has become tough and we really need to think outside the box. This means a new language of brand spelling and grammar has emerged, one designed to twist its way around the trickiest of legal checks to assert the most powerful name. It embraces misspelling, celebrates the incorrect use of accents and merges words together. Even devoid of a clear logic, names that don't necessarily seem to rationally work at the start can be the most successful ones at the end. Their meaning can grow over time. With the benefit of hindsight, I would have loved to sit in on the board meeting where Nintendo Wii was suggested! Don't be afraid of being disruptive.

Consider far-reaching business growth in your name. It needs to allow you to go above and beyond what you're doing currently: to allow the brand to flex and expand in the future. Dunkin' Donuts wants to be known for more than just donuts, and so chose to remove the noun from its name.

Start by identifying whether you want to stand out or fit in. For challenger brands, your mission is to shake up the norm. That might mean deliberately going against naming conventions in the category or overcoming an unresolved issue apparent in competitors. With Femme, we wanted to create a name that contradicted an idea in the Chinese market that using tampons was unhygienic and unfeminine. The name "Femme" brought an elegance and positivity into the category, creating significant cut-through for the brand. A powerful name can solve a societal taboo or, in the case of tushy, bring a more upbeat tone into a product with prohibited affiliation. With Oui™ by Yoplait®, we partnered with General Mills, who were trying to challenge the American yogurt category defined by its "low calorie" callouts and functional, predictable naming strategies. Their product stood in contradiction to this with its emphasis on French food, favor and values. The name "Oui" reframed the overwhelming restriction of the category, emphasizing, celebrating and embedding desirable cues of French-ness, and crucially saying yes to so many of the things that the category was saying no to.

If you're going to exist in more than one market, you need to seriously check your name with people fluent in both the slang and proficient use of the language. A favorite mishap is the Mercedes-Benz example—moving into the Chinese market under the name "Bensi," meaning "rush to die."

Understand that no name can do it all.

A great name can form the basis of all your future communication, your vision, how you express yourself and how you behave. At the same time, it's vital to understand that a name on its own is only one dimension of the brand. A name is a half-empty vessel that needs to be filled up with meaning. Design is vital in bringing it to life.

Go with your gut.

To find out more about Pearlfisher, or to get help crafting a brand name for your vision, visit pearlfisher.com. 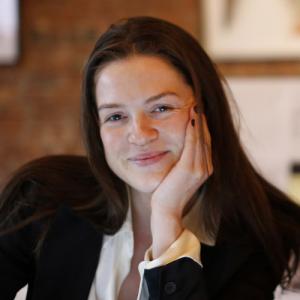