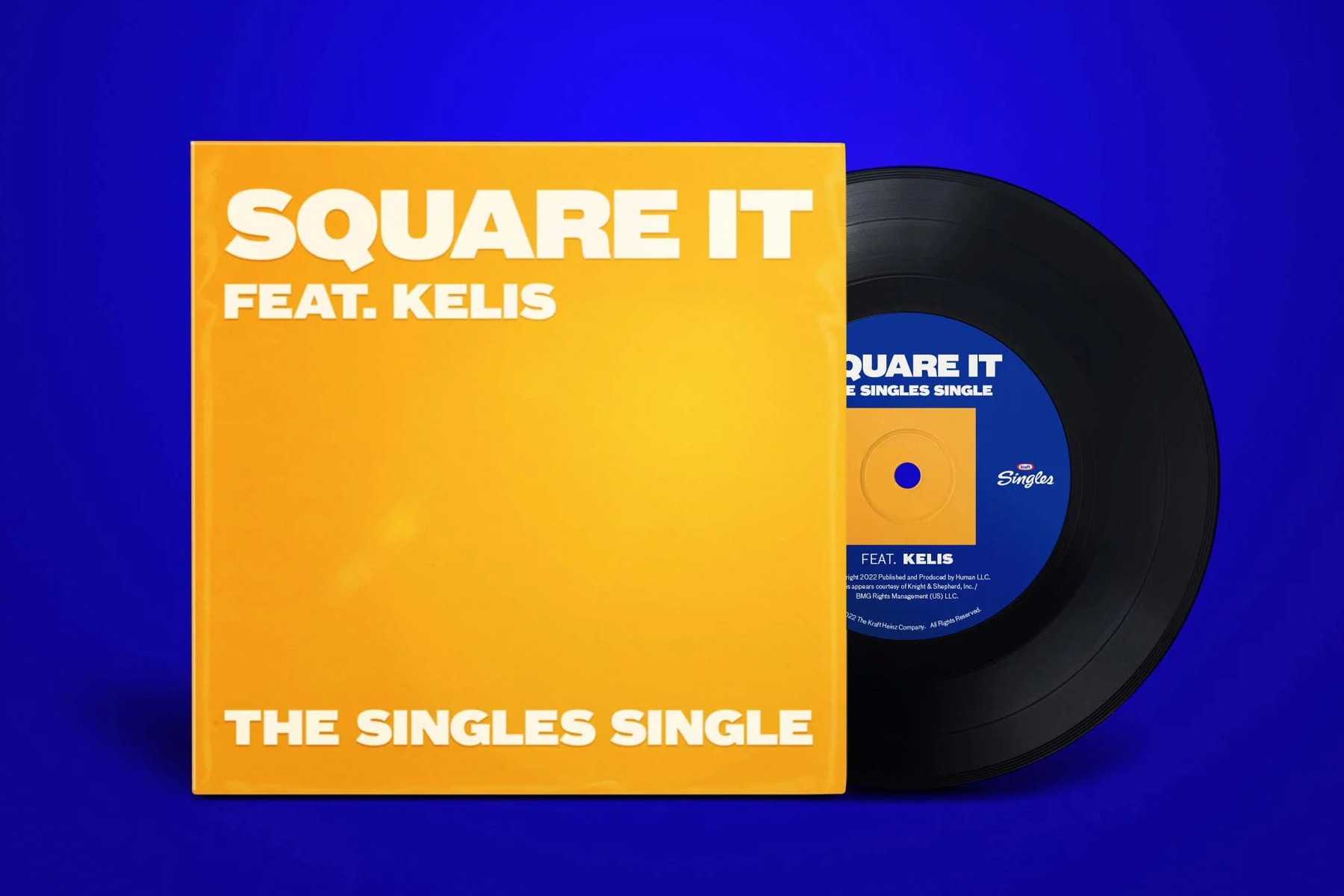 If you're dropping a dance track for Kraft Singles, choosing a singer who knows her way around the kitchen, and whose biggest hit mentions dairy, feels appetizingly apropos. So, agency Johannes Leonardo and music house Human engaged "Milkshake" chanteuse Kelis, who's also a Le Cordon Bleu-trained chef and cookbook author.

She performs "Square It," Kraft Singles' first ... single. It's a slice of gastronomic glee celebrating "Grillin', chillin', spillin', dillin', BEC-ing, never brie-ing," and other ways to get cookin' with America's best-selling processed cheese.

That earworm streams across Spotify, Apple Music and other platforms. There's limited-edition vinyl, too. And dancer Honey Balenciaga stars as a chef in this video from Scheme Engine director Sammy Rawal:

See, it's hip to be square!

"Whether it's pizza or chili cheese hot dogs, I'll melt Kraft Singles on top and it gets really creamy," Kelis says in a statement. "I put Singles on cheese fries. Kraft Singles are just comforting and fun, and you don't have to overthink it. It's not fancy, but it's delicious."

Here are the full lyrics, for those who want to sing along:

Meltin', breadin', bakin', shreddin'
Slicin', dicin', spicin', ricin'
If you're Swissing it, then you're missing it
Fryin', flyin', savorin', favorin'
Over rotini, inside a panini
Egging, maining, siding, plain-ing
Debunk the inglorious, one shape's victorious
Square it!"

"As a result of the pandemic, Kraft Singles has seen double-digit growth for the first time in five years. We wanted to celebrate this," says Kraft Heinz senior brand manager Kylea Pittrich. " 'Square It' is all about taking Kraft Singles out of the kitchen and bringing the brand into pop culture as we look for new ways to engage with our fans." (Smucker's Jif Peanut Butter cooked up something similar last year, with Ludacris rapping the product's praises.)

Below, the Kraft Singles team dishes on their project:

Muse: Why go the music route?

Zoe Myers, Copywriter, Johannes Leonardo: Our goal was to move the cheese into the cultural spotlight. Our way in was right there in the name. Kraft is so good at Singles, we decided to drop one. And thus, the "Singles Single" was born. It's part of a larger Kraft Heinz anti-advertising effort, as they look to modernize many of their brands, so this was never intended to be an ad. And Kraft really stuck to this approach. In early rounds, we'd even get feedback saying there was too much food focus in certain sequences [of the video]. How often do creatives get "Can we have less product?" feedback?

Matthew Barton, Art Director, Johannes Leonardo: We focused on the music space, as we know our consumer has a passion for music—especially dance/electronic, Spanish/Latin and R&B. There's an obvious nostalgia around Kraft Singles, but that doesn't mean people aren't hungry to see it in a new light. We wanted to leverage that feeling, while modernizing the execution.

So, you're targeting a younger demo? This isn't their father's Kraft Singles?

Matthew Barton: Yes, we are going after a younger crowd. But also, not taking ourselves too seriously. At the end of the day, it's a track about cheese, and who wouldn't want that in their life?

Kelis seems like a great choice for the project, given her foodie background.

Matthew Barton: Kelis perfectly embodied our idea, because she continues to not only adapt her music, but has taken her creativity into the food world as well. She did exactly what we were trying to do, just in reverse. She had to be our spokesperson.

Zoe Myers: We wanted a killer name attached to it. And Human crushed it with the musicality of the track, crafting a melody that effortlessly suited our lyrics and Kelis' voice.

Speaking of lyrics, you certainly spread the cheese on thick.

Zoe Myers: Once we established the concept, the lyrics came pretty fast. What's interesting about Kraft Singles is the endless ways to use them. It's an ingredient you'll find in fast-food joints, Michelin Star restaurants, and every kitchen in between. We took this ubiquity and made it rhyme. Throwing shade at other cheese came naturally. "If you're not oozing then you're losing" was the first thing we wrote down.

Were you always planning to make a music video, too?

Zoe Myers: From the beginning, our strategy was to be as authentic to a true single release as possible. So, it made sense that once we dropped our single, we dropped an accompanying music video a week later.

Matthew Barton: She's a fresh face who is new and unexpected. We have director Sammy Rawal to thank for introducing us to the joy that is our ebullient, vivacious kitchen queen. You may have seen her on HBO Max's Legendary, or in FKA twigs' video for "Tears in the Club," or Megan Thee Stallion's "Don't Stop." As a staple in the ballroom scene, she brought with her the wonderful world of voguing, which was the perfect physical embodiment of our song ... the flourishes and the implied shapes, creating fluid square-inspired movements.

Throughout the process, the music video was as much Honey's vision as ours. She had so many ideas and wanted to be involved in everything, from wardrobe to pre-pro calls to checking in with us in between takes. Plus, major bonus points for Megan Thee Stallion commenting "Yesss Cheffff" on Honey's Instagram post of the music video.

So, a voguing chef. That's basically the whole video, and it's hypnotic.

Zoe Myers: The CPG world is already saturated with amazing, disruptive work. But so often we see "disruptive" executed as wackiness. Is it possible to be surprising without defaulting to the absurd? We think so. We had other concepts floating around—a lyric video made from food, a hand-tutting spectacle to the beat of the track. It felt more alluring to follow the high-octane imaginings of a chef who's infatuated with Kraft Singles.

Where did you shoot? What went down on set?

Sammy Rawal: It helped that Honey and I are friends and have worked together in the past, so I knew her technical and charismatic performance chops, and she understood how things would come together in the edit. Honey was down to try anything. She was fearless and came up with hilarious ideas on the spot to try—dips across rows of unstable countertops, you name it. It was her idea to hide in that pot and jump out, and everyone was like, YES!