The mystery of an unconventional live music experience

One of this week's more intriguing announcements in the music world was the introduction of Oda, a brand of audio speakers that will give their owners unique access to stream curated live musical performances from around the world.

In a media landscape of on-demand everything, it's a curious anomaly, and has drummed up a lot of interest as a result. Every weekend, Oda—founded by Nick Dangerfield, with investors including Alexis Ohanian—plans to broadcast a series of performances by a single artist, while during the week there will be a mix of scheduled performances and unscheduled/surprise guests.

The speakers are visually interesting, too—a pair of freestanding wooden squares, acting as a portal to thrilling live-music experiences we've all been lacking during Covid.

The unique product has gotten some unique advertising, as well, courtesy of Wieden + Kennedy Portland. A series of four mostly animated spots introduces the brand in an artful, oblique way that matches the vibe of the product. Several of the spots lean into product features that might seem undesirable ("Oda does not wait for you," one ad says, to emphasize the live nature of the music")—though again, that's as much of a selling point as a drawback.

"From the first moment we heard about this mysterious wooden speaker that plays live music, everyone at W+K was entranced," W+K creative directors Christen Brestrup and Bertie Scrase say. "It's been an absolute joy to work with Nick and the Oda team to help bring to life such a unique and joyous brand. In a world obsessed with the ability to have everything 'on demand', along comes Oda with a truly fresh and, quite frankly, relieving live experience where the listener is required to just listen. We can't wait to continue to build this special brand and help people completely reimagine how they listen to music."

Brestrup and Scrase add that they deliberately wanted to upend the kind of traditional messaging found in most music marketing: "With the four launch films, we wanted to showcase some of the aspects around 'live' that make Oda such a unique product—things that other sound or music companies might not say. Like the fact you might miss a performance, or that the amazing sound makes you feel spatially confused. While, at the same time, retaining a certain degree of Oda's mystery and charm." 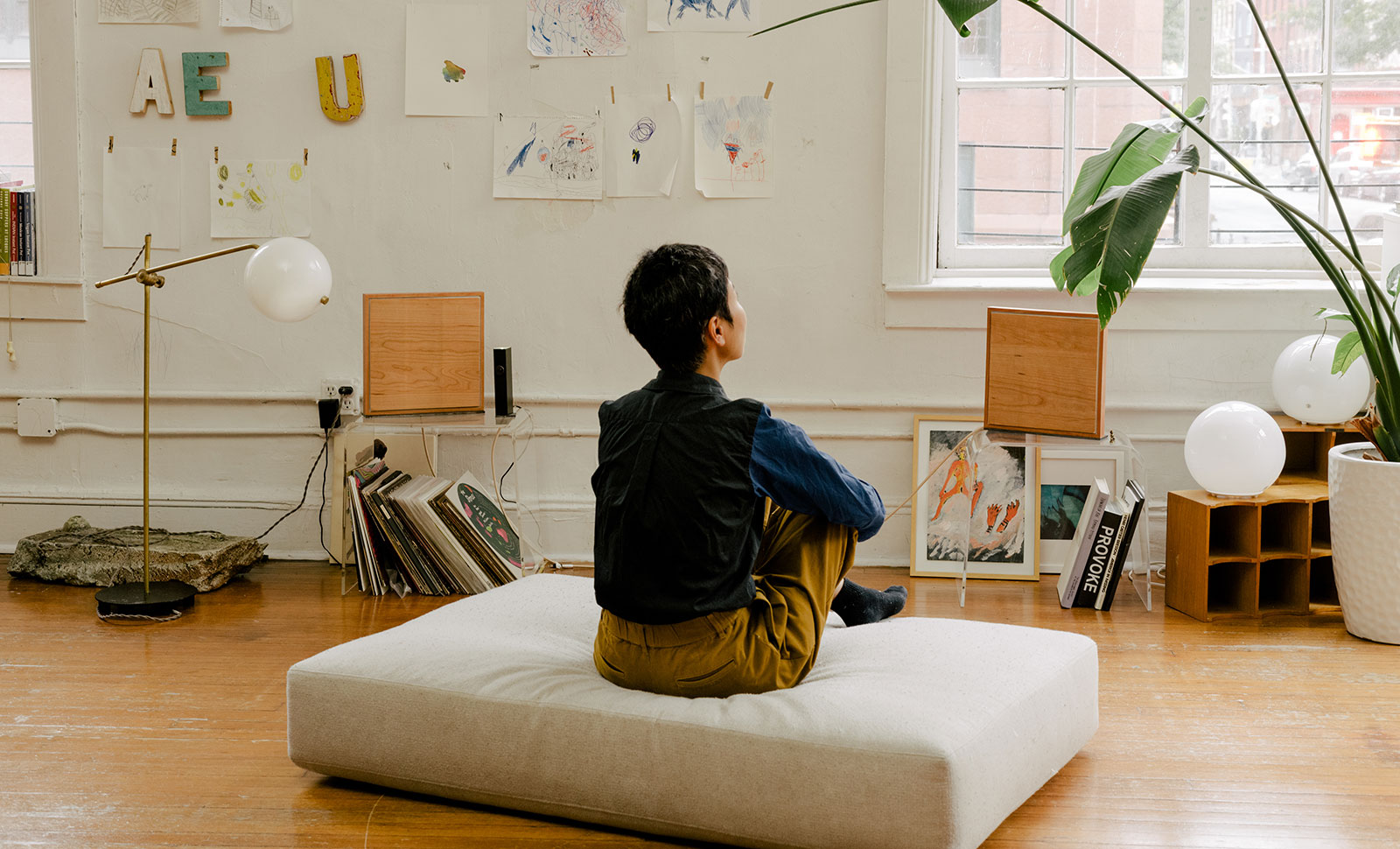 Oda is available for a promotional presale price of $299, and $79 for seasonal membership at Oda.co. After the first 1,000 units are sold, the list price will be $399. You can also use Oda as a traditional Bluetooth speaker. Oda wants to create a sustainable platform for artists, and membership pays for performance fees to participating artists and crew.

"We made Oda because live music is a vital part of our lives," says Dangerfield. "We believe all of us should be doing our part to preserve the cultural value of music. Artists are increasingly subjected to unfavorable terms, yet they continue to give us music of life-affirming quality. We're just trying to build something positive. And our secret mission is to make you listen carefully. If you truly listen, everything will be fine."

Below, check out a list of artists who are scheduled to perform through the Oda speakers this winter and spring:

Legendary, Grammy-nominated jazz vocalist who, as a four-octave baritone, possesses one of the most unique ranges in the music's history.

Chicago-based composer, clarinetist, singer and "spiritual jazz soothsayer" who has enjoyed global recognition for the potency, prowess and charisma of her cosmic musical proselytizing.

Artist, producer, composer, activist, and queer icon whose era-defining productions for Kanye West, FKA twigs, Björk, Frank Ocean and others set the stage for her own groundbreaking solo recordings.

London-based artist, producer, sound designer and composer heralded by The Guardian as "the most thrilling new artist in electronic music" and whose debut full-length album, Workaround, is widely touted as one of 2020's best.

Canada-based singer, musician and songwriter whose '70s and '80s folk and electronic recordings enjoyed rediscovery and revival by younger audiences in the 2010s and is the subject of an acclaimed 2019 documentary film, Keyboard Fantasies: The Beverly-Glenn Copeland Story.

xAtlanta-based singer, songwriter, guitarist and charismatic front-man and creative engine of the group Deerhunter, heralded by The Guardian as, "one of the great US bands of the century."

South African multi-disciplinary artist and co-founder of queer performance collective FAKA whose acclaimed 2020 album Desire is heralded by Pitchfork as "a multi-sensory exploration of the nature of the divine."

Memphis soul music royalty who've been married for 50 years, and collaborated on the classic "I Can't Stand the Rain" and other essential recordings. Ann retired from public performance a few years ago, while Don's music career has enjoyed a great revival in recent years.

Glasgow-bred artist who grew up in the gangs of '70s Scotland, collaborating with Psychic TV and becoming a member of Coil in the '90s, and continues to mine the hallucinatory spaces that exist between reality and celestial otherness with a haunting spirituality.

Singer, songwriter and musician whose stunning work across three acclaimed albums reflects an unerring commitment to intimacy through her voice and guitar.

Chicago-bred, New York-based singer, producer and multi-instrumentalist whose work, as featured on her acclaimed 2020 debut Forever, Ya Girl, spans R&B, funk, hip-hop, and obscure Prince covers, and has been lauded by Pitchfork for its soulful, singular sound.

Classically trained cellist who played on countless soul music classics as part of the string section for Philadelphia International Recordings' house band MFSB, and has served as the revered string arranger for the Roots, Erykah Badu, Jill Scott, Brandy & Monica, Justin Timberlake, Kanye West and others.

"Harlem's secret jazz queen of Sugar Hill," is a pianist, singer, educator, actress, and writer who for the past 26 years, has hosted live jazz performances at her home every Sunday for anyone who wishes to attend.

Responsible for one of '70s soul music's true lost jewels – his group Wee's album You Can Fly On My Aeroplane – this singer, songwriter and instrumentalist would not enjoy the audience his music merited until the 2000s, when while incarcerated his work was rediscovered and sampled by the likes of Kanye West, Jay Electronica and Frank Ocean and others.

Southside Chicago-based clergyman and community leader whose elusive 1971 album recorded with an after school program choir, Like a Ship… (Without a Sail), is considered one of the great gospel-crossover masterpieces, and has won fans from members of Radiohead to Kanye West (who has also sampled the Pastor's music).

Revered composer, sound artist, scholar of electronic music and recorded media, and one of the pre-eminent contemporary figures and performers in electroacoustic music.

Sonia Sanchez — poet, activist, scholar — was the Laura Carnell Professor of English and Women's Studies at Temple University. She is the recipient of both the Robert Frost Medal for distinguished lifetime service to American poetry and the Langston Hughes Poetry Award. One of the most important writers of the Black Arts Movement, Sanchez is the author of sixteen books. She is recently featured in the film, Mr. SOUL! (Netflix).

Standing On The Corner

New York City collective that has forged a singular creative path across a series of acclaimed, genre-eluding recordings, and is led by the enigmatic Shamel Cee Mystery, whose production credits include collaborations with Solange and Earl Sweatshirt. Terry Riley

Legendary composer, musician and pioneer of the Minimalist movement, whose seminal work would introduce new concepts and musical forms to Western composition and fundamentally change the course of 20 th Century music.

20-something-year-old singer-songwriter with a self-described "200-year-old voice" whose emotive sound has been heralded by the New York Times as, "at once earthly and otherworldly," and works in close collaboration with Frank Ocean-associate, producer Daniel Aged.