The Magnificent Seven, and the Long Shadow of Its Film Score

Elmer Bernstein's music took on a life of its own 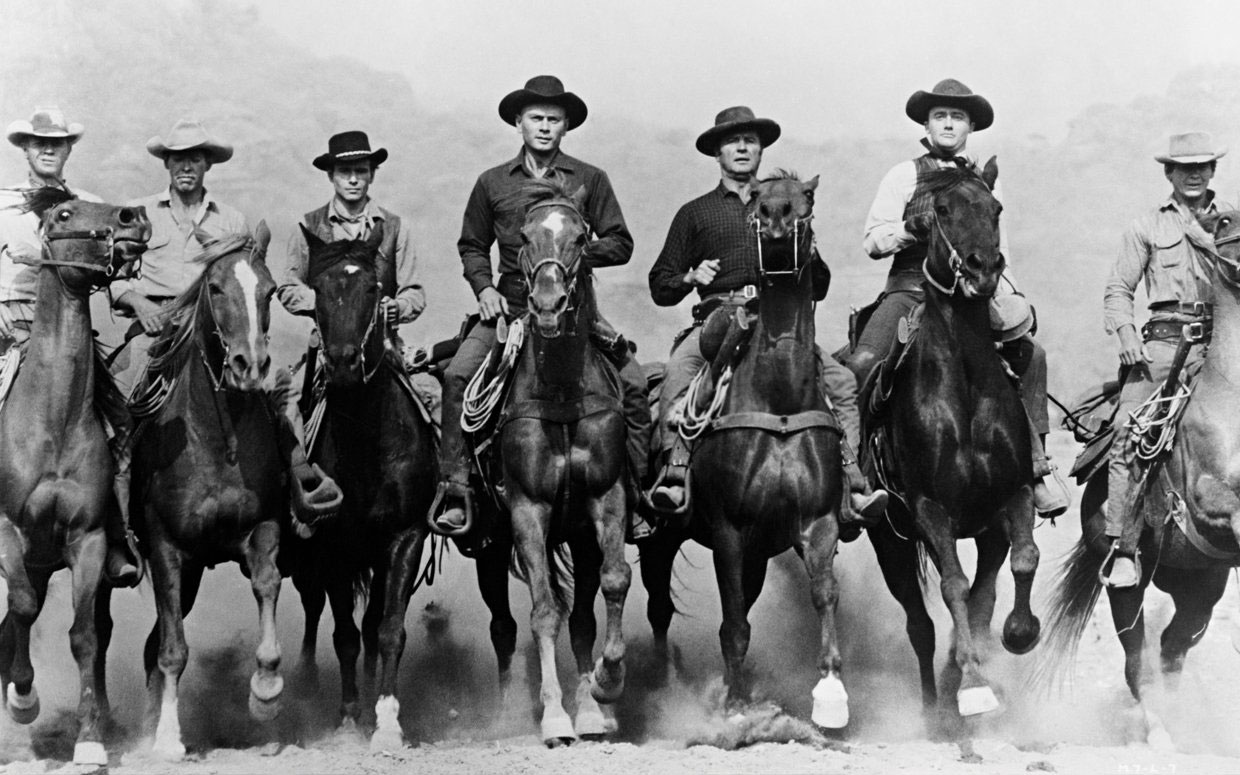 When it was released in 1960, a reviewer for The Hollywood Reporter wrote, "The Magnificent Seven has the stars and the production values to open big, and probably will. But it is not a success, as a story or as entertainment."

Sixty years later, we know it as one of the all-time classics of the Western genre, with a 2016 remake grossing well over a billion dollars worldwide at the box office. Still, while THR's review may not have stood up against the course of history, one particular line appears remarkably prescient. Included almost as a throwaway among a short list of positive exceptions, the reviewer writes: "Elmer Bernstein's music is truly memorable; the theme will stick."

In fact, Glenn Lovell's 2008 book about the Magnificent Seven's director—Escape Artist: The Life and Films of John Sturges—describes the film's theme music as "arguably, after John Williams' Jaws and Star Wars themes, the most recognizable overture in the history of the medium." Bernstein's theme took on a life of its own after the film's release, having its place confirmed as the soundtrack to American masculinity in the iconic Marlboro Man ad campaign, and even appearing in a shot of James Bond riding across a desert in Moonraker.

While The Magnificent Seven has seen numerous sequels and reboots, it is itself a remake of Akira Kurosawa's Seven Samurai from 1954, in which a group of samurai are hired by a village to protect them from bandits. The origin of Sturges's remake was mired in controversy over who owned the rights, and the set was reportedly awash with clashes of ego, the actors regularly trying to upstage each other and causing conflict over who had the biggest horse and the flashiest gun.

But in spite of all this action on set, Elmer Bernstein tells us, "If you look at the movie without music, you'd be surprised how slow-moving it is. I realized immediately that the function of the music would be to get on top of the film, drive it along. It had to have tremendous life and vigor."

This contrasting of sound and picture was a technique he'd taken from working with the renowned filmmaker Cecil B. DeMille on The Ten Commandments in 1956. In an interview at the BFI, Bernstein told Cynthia Miller:

"The best DeMille story was the exodus scene in the Ten Commandments. Moses brings his staff down on the ground and the Hebrews march off. But they weren't Hebrews in the film. They were Hebrews being played by members of the Egyptian army.

We were then on good terms with Egypt. At least, DeMille was. He got these 5,000 troops to act in this scene. They marched out very slowly. I had written a ponderous quasi-Hebraic anthem. DeMille listened to it, saw it and did not like it all. As a matter of fact, he hated it. I said, 'Well, what's the matter with it?' He said it was too slow. I said, 'I'm just reflecting what I see on the screen. This ponderous movement of thousands of people.' He said, 'That's the trouble with it. It's too slow. I hate it.' I said, 'Won't it seem strange if I write something really fast?' He said, 'Trust me, it works.' And he was right. I learned a great lesson with that. I said, 'Like what?' He said, 'Something like Onward Christian Soldiers.'

I thought, well this is the most ecumenical thing I've ever heard of. I said '5,000 Hebrews being played by members of the Egyptian army marching on to Onward Christian Soldiers.'

But he was right. You can make something seem more energized than it really is."

Another influence from DeMille came in the form of Bernstein's use of leitmotifs in The Magnificent Seven's score. He tells us that DeMille was a Wagnerian, believing "every character should have their own motif and when they were on screen you would play it."

In her book Elmer Bernstein's The Magnificent Seven: A Film Score Guide, Mariana Whitmer writes that Bernstein "teases out distinctions in the personalities and musically describes the hardships faced by the characters, as well as their shifting status throughout the film." She draws particular attention to the way the music reflects the weakening status of the film's main villain, Calvera:

"Calvera's music is threatening the first time it is heard at the beginning of the film and again when he returns … but Bernstein shows Calvera's altered stature in the middle portion of the film through shorter and altered versions of his theme." According to Whitmer, "music is integral to the drama, and it is applied with such notable attention to detail, that appreciating its assembly is like solving a puzzle." 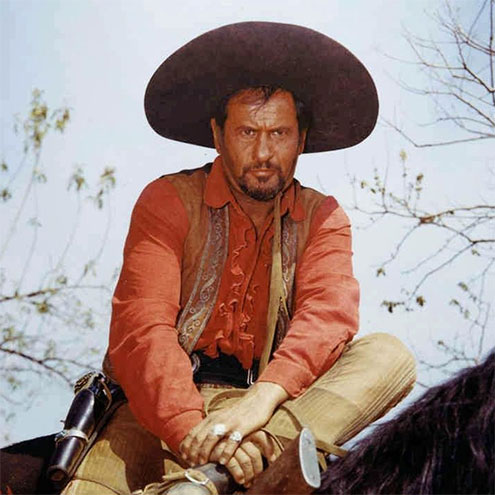 Bernstein's road to working with the likes of DeMille and John Sturges was an unusual one. He'd begun a career as a concert pianist in New York from the age of 15, while studying under Aaron Copland and later Stefan Volpe. By his twenties, he'd become involved with the burgeoning American folk scene, which at the time was populated with strongly left-leaning musicians, among whom Bernstein counted himself, like Woody Guthrie, and ethnomusicologists such as Alan Lomax, for whom folk music was a means to preserving working class cultures and raising class consciousness.

Guthrie's songs, such as "This Land Is Your Land" and "I Ain't Got No Home in This World Anymore" are highly political expressions of the disenfranchisement and struggles experienced by the American working class in the face of right-wing national ideology, and in the '50s he'd go on to write a song about the racist housing policies enforced by current U.S. president's property tycoon father, Fred Trump. When the Second World War came around, the U.S. military decided that folk music could be used to instill patriotism among the troops, and Bernstein was drafted in by the Army Air Corps to arrange songs for propaganda radio shows. After the war and a brief return to concertizing, Bernstein scored a radio show written by a friend to celebrate the achievement of peace in Israel, something which he came to look back on painfully. This score was picked up by the magazine Variety and reviewed positively, leading to film work in Hollywood.

By the time The Magnificent Seven came around, Bernstein had composed high-profile soundtracks to The Ten Commandments and The Man with the Golden Arm, which caused a stir with its jazz score and paved the way for the idea that films could be soundtracked with popular music. He also narrowly avoided a career-ending incident when he was grey-listed by McCarthy's government at the height of the Red Scare, something which he later described as a point of pride. But aside from his successes as a film composer before and since, among the most intriguing aspects to the story of The Magnificent Seven's theme are the ways in which it has continued to exist beyond the movie. 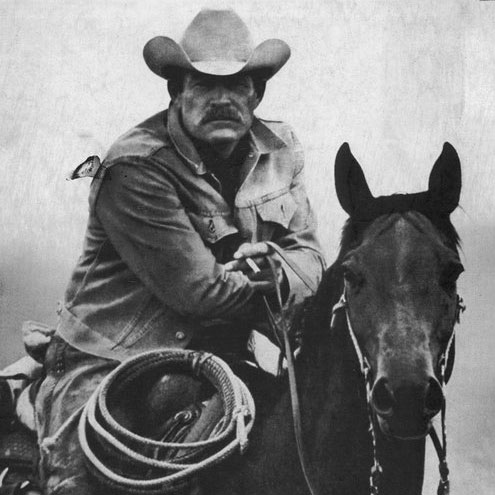 The year after the film's release, the jazz guitarist Al Caiola released an orchestra-backed cover of the song, and in the same year, the composer of the iconic James Bond score, John Barry, released his own cover, inspired by surf rock. It later resurfaced in the intro to Arthur Conley's 1967 song "Sweet Soul Music."

But perhaps its most iconic reinvention came with the longstanding Marlboro Man campaign, which ran from 1963 to 1971. In an article by Denver Post journalist Jim Carrier, who spent six months traveling across the American West to meet former Marlboro Men, we're told that the campaign began in late 1954, when ad exec Leo Burnett asked his top creatives, "What is the most masculine image in the U.S. today?" According to Carrier, "Philip Morris, the fourth-largest American tobacco company, wanted to create a filter cigarette to deal with the rising problem of smoker's cough and lung disease. But they had to overcome the early image of filters as being for sissies."

He tells us that "in 1963, almost by accident, Leo Burnett's film crew discovered the magic of real cowboys on the 6666 [the Four Sixes] Ranch in Guthrie, Texas. With the theme from The Magnificent Seven in the background, ad scenes of real cowboys riding the range made Marlboro the best-selling cigarette in the world, and Philip Morris the largest manufacturer, with cash flow to gobble up Kraft Foods and Miller Beer." Over eight years, Marlboro ran a series of TV ads backed by variations on Bernstein's theme, until they were relegated to billboards by a broadcast ban on tobacco products.

This transformation from movie soundtrack to sonic signature conjuring visions of the expansive West and a romanticized, rugged, American masculinity—and selling billions of cigarettes in the process—speaks volumes about the power of a well-crafted bond between music and film, as well as the dangers of what we now see more clearly as irresponsible advertising.

Bernstein once said, "Every once in a while—it doesn't happen often—you hit on something that really feels quite thrilling. I remember being very excited when I found that opening rhythm. It was like a surge of energy." As exciting as this discovery might have been, it's hard to imagine Bernstein could have had any idea of the impact these short lines of music would go on to have.