Why this unconventional artist was the perfect choice

In the lead-up to Joker's release last year, the film was shrouded in controversy and has since been met with extreme ambivalence.

Darker, adult-themed versions of canonical comics are nothing new; indeed, the Joker first appeared in Batman #1, released in 1940, as a psychopathic serial killer based visually on Conrad Veidt's character in the 1928 silent film The Man Who Laughs. He reappeared regularly in the comics over the next two years, murdering his victims with "Joker venom," a poison that left them with a grotesque rictus grin, and at one point derailing a train.

The 1942 story "The Joker Walks the Last Mile" is seen as a turning point when the character began to transition, in response to a gradual shift in public opinion toward comic books, into the goofy prankster that dominated the Batman stories for the next 30 years. This transformation reached its peak in 1954, when the Comics Code Authority was established, banning gore, innuendo and violence from comics. This was in response to a claim made by psychiatrist Fredric Wertham that comics were responsible for a rise in juvenile delinquency, violence, and homosexuality, which provoked hysteria among parents and several mass book burnings.

Alan Moore's 1988 comic Batman: The Killing Joke broke the cycle, portraying the Joker with such sinister and sexualized violence that he later disowned it, describing it as "a regrettable misstep." Nevertheless, The Killing Joke reframed the possibilities of the genre and had a profound impact on the contemporary trend that found its apotheosis in Christopher Nolan's Dark Knight trilogy. 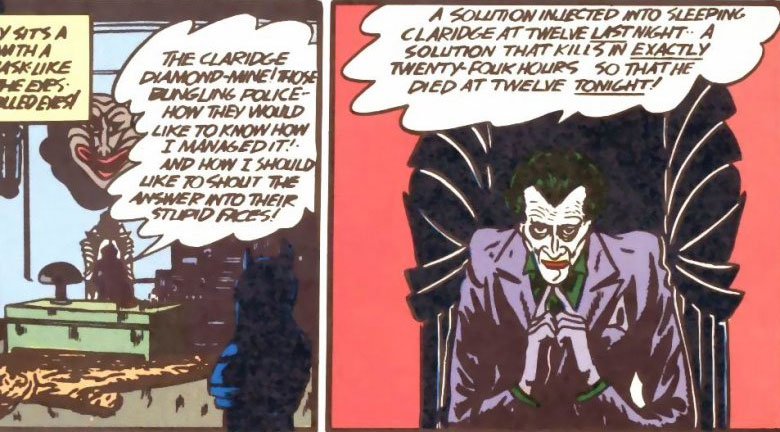 Despite all this history, Todd Phillips' Joker was widely hailed as a radical departure from the form in its centering of the traditional villain and his sympathetic portrayal, bitterly dividing audiences. The movie follows the story of Arthur Fleck, a party clown and unsuccessful standup comedian who lives in poverty with his aging mother and suffers from a mental health condition that causes him to laugh uncontrollably at inappropriate times. Set against the backdrop of a decadent Gotham City, in which billionaires like Thomas Wayne look down and moralize against the poor underclass while inequality grows rampant, Fleck suffers a breakdown and transforms into the violently nihilistic Joker, inspiring a wave of violent protests.

In a review for Time, Stephanie Zacharek wrote, "In America, there's a mass shooting or attempted act of violence by a guy like Arthur practically every other week. And yet we're supposed to feel some sympathy for Arthur, the troubled lamb; he just hasn't had enough love." Cinemark announced that the movie wouldn't be shown at the Century Aurora theater in Colorado, where 12 people were killed in a mass shooting during a screening of The Dark Knight Rises in 2012, while ABC News reported the FBI were coordinating responses to possible violence related to the film's release and warned of the possible danger of "clowncel" copycat killers. Nevertheless, the movie went on to take the top prize at the Venice Film Festival and received 11 nominations at the Oscars, with Joaquin Phoenix winning Best Actor for the titular role.

Amid all this chaos, one aspect of the film has been uncontroversially and unanimously applauded. Hildur Guðnadóttir's score made her the first female composer to win Best Score at the Golden Globes, the first solo woman to win the BAFTA for Best Original Music, and one of only three women—joining Rachel Portman (Emma, 1996) and Ann Dudley (The Full Monty, 1997)—to have won Best Original Score at the Oscars.

Comprised of droning cellos and electronics, the score provides a tense and unsettling backdrop to the film, compounding the uneasy visual aesthetic. The film's awards came within weeks of an Emmy and a Grammy for Guðnadóttir's very different soundtrack to the HBO series Chernobyl, which she composed at the same time.

Apart from a few big musical cues that include her own vocals, and a hauntingly beautiful setting of the Ukrainian requiem "Vichnaya Pamyat," which she arranged and recorded with the Homin Lviv Municipal Choir, the Chernobyl score was created almost entirely from sounds Guðnadóttir recorded on a day spent in a hazmat suit exploring the abandoned power plant used to film the series along with sound engineer (and founding Cabaret Voltaire member) Chris Watson. Guðnadóttir has said she wanted the power plant and its radiation "to be a voice in itself. I wanted to understand the feeling of what must have gone through people's heads as they were trying to navigate through that disaster."

Despite a phenomenal breakthrough in the last year, Guðnadóttir, 37, is keen to stress she's been working in music, and on and off in film, for more than 20 years.

The Icelandic composer picked up the cello at 5 years old (her mother sold her car to pay for the instrument), studied at the Reykjavik Music Academy, the Iceland Academy of the Arts, and the Berlin University of the Arts. At age 15, she released an album and a single as vocalist for the teen grunge band Woofer, and began sitting in with the local electronica group Múm, appearing briefly on their 1999 debut album. After returning from Berlin, she became involved with the experimental neu-Iceland scene, joining the Kitchen Motors group founded by the late Icelandic composer Jóhann Jóhannsson, with whom she would later work regularly on scores for films like Arrival (2016) and Mary Magdalene (2018), and on his final album, Orphée (2016).

In 2004, she began collaborating with Angel, the duo formed by Ilpo Väisänen, of the legendary Finnish experimental industrial/techno group Pan Sonic, and Dirk Dresselhaus, releasing the In Transmediale album with them in 2006. Through this connection she began performing live with Pan Sonic and would later feature on their 2007 album Cathodephase. Her first solo album, Mount A, was also released in 2006 under the pseudonym Lost In Hildurness. Eschewing her collaborative tendency, she played every instrument on the album, recording vibraphone, viola de gamba, harp, vocals and cello between a studio in New York and Audunarstofa—an old house in Hólar in Hjaltadalur, the historic capital of the Icelandic north, made from Norwegian wood and chosen for its acoustics.

She has continued to release studio albums alongside film work ever since, the latest being 2014's Saman, and similarly continued her collaborations with artists at the bleeding edge of experimental music. In 2007, she co-wrote a choral score as part of the pioneering industrial group Throbbing Gristle's rescoring of Derek Jarman's 1981 film In the Shadow of the Sun, and most recently appeared on the drone metal band Sunn O)))'s 2019 album Life Metal.

Guðnadóttir was apparently surprised when Joker director Todd Phillips got in touch, telling him, "Well, if you're looking for someone to do an action movie, I'm not really sure I'm the right person." Phillips sent her the script, and she was immediately convinced, later stating, "I've never been as struck as I was with this … I just really felt strongly for Arthur."

Unusually, she was able to start composing from script before filming had even begun, enabling the music to provide a backdrop for other aesthetic choices in the movie, including Phoenix's portrayal of the title character. Improvising on her halldorophone, an electro-acoustic cello with a propensity to droning feedback, she wanted to "find my way into his head, and try to make music out of what I felt." When she found the tone, she told the Guardian, "it was almost like it punched me in the chest … and then this physical reaction, this movement happened, because I had found his voice, found what he wanted to say."

Stuck for inspiration during filming of a scene set in a bathroom, after Arthur's first murders, Phillips played some of Guðnadóttir's music, filming Phoenix's reaction as he danced around the room. She later said it was "completely unreal to see the physical embodiment of that music. His hand gestures were the same types of movements I felt when I wrote the music. It was one of the strongest collaborative moments I've ever experienced."

Collaboration is clearly an important aspect to her creative practice, and it's vital, also, to the process of setting music to film. It's perhaps significant that the music for Joker and Chernobyl were both composed before and during the filming process—not, as is much more common, afterward as the final piece. Their successes attest to the powerful effects of allowing the music to inform the cadences and rhythms of what appears on screen, and giving it a voice within the collaborative process.

Guðnadóttir's haunting score does not comprise Joker's entire musical world. Instead, it works in tandem with commercial music synced by music supervisors George Drakoulias and Randall Poster. This aspect to the film has been less widely acknowledged, but raises points of interest and drama in and of itself. Musical selections such as Frank Sinatra's "Send in the Clowns" and Tony Bennett's "Put On a Happy Face" were described by one reviewer as "on the nose," but others make for some of the movie's most iconic sequences.

While Arthur is driven through the streets of Gotham in a police car, laughing to himself as he surveys the carnage of riots all about him, Cream's "White Room" breaks the malaise of tension, bringing the film's energy to a euphoric pitch. A personal favorite, "My Name Is Carnival" by Jackson C. Frank, an American folk singer whose own story is perhaps even more bleak and tragic than Joker's, plays on the radio while Arthur packs up his things after being fired from the clown agency.

One particular cue has been a source of much controversy. In an important scene in which Arthur dances down some stairs after killing a former colleague and completing his transformation into the Joker, Gary Glitter's "Rock & Roll Part 2" plays briefly, before fading ominously into Guðnadóttir's suspenseful strings. Also known as the "Hey Song," this instrumental B-side to Glitter's breakthrough 1972 hit gained huge popularity both in the U.K. and the U.S., where it became a regular fixture at sports games.

When Glitter—real name Paul Gadd—was convicted of a number of cases around child pornography and abuse starting in 1999, the song fell out of favor in the U.K., but was only slowly phased out of American sports, due to his much lower profile in the U.S. media. Nevertheless, its appearance in the Joker movie led to some kickback, with the Sun newspaper falsely claiming Glitter was set to "rake in a fortune." The rights holders Snapper Music and Universal Music Publishing were quick to announce they wouldn't be paying Gadd for his share, though it isn't clear what they plan to do with the money, and Warner Bros. apparently considered removing the song before the DVD release.

Filmmakers have used controversy to publicize their movies in the past, but it seems to be a fundamental aesthetic principle in the making of this film. Every creative choice goes against the grain, aiming for unease and discomfort, from the decision to make the comic-book villain the central character, to the nauseating yellow tinge of the camera, and the choice of a composer who in the past has been more likely to share a stage with Throbbing Gristle and Pan Sonic than the likes of John Williams and Brad Pitt.

Whether its modish but critically vague anti-capitalist setting makes for good political messaging is another question. But as an attempt to flip the script on Hollywood's treatment of the Batman story, it's an undeniable success, and its music plays a vital role in making it so.

Listen to the music by Hildur here.