Rich Levy, CCO of Klick Health, on the State of Healthcare Marketing

CANNES, France—In another lifetime, when he worked in consumer advertising before making to the jump to healthcare, Rich Levy wrote the classic "Can You Hear Me Now?" tagline for Verizon.

After a decade as chief creative officer of the FCB Health Network, Levy joined Klick Health six weeks ago as CCO. And he remains on a mission to raise the quality of healthcare advertising—most of which makes only a fraction of the impact of big campaigns in traditional consumer categories.

Levy sat down with Muse on the Carlton Terrace to talk about the state of healthcare marketing today, from the energy around experiential to whether health clients are truly committed to raising the bar creatively. 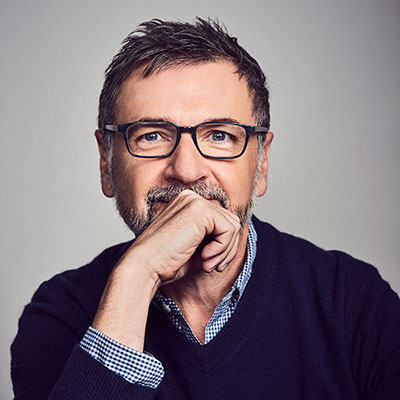 How is creativity today in pharma advertising specifically?

When you're looking at the [Pharma Lions] shortlist, the vast majority of the pieces are still in the craft categories—art direction, copywriting, animation, CGI. You're yet to see something shortlisted that's a big 360 idea. From past experience, you're seeing small parts of bigger campaigns, which always leads me to believe that the campaign, in itself, fell down in some way.

So it's pretty small compared to breakthrough creative in health and wellness?

Well, there's only, I think, 11 pharmaceutical companies represented in the 31 shortlisted works. So it's a small group of agencies and a small group of clients who are trying to do work that's different. And if there were 400 or 500 entries and 31 shortlists, I mean, that's 8 percent. It's a very small amount.

That's the challenge of pharma, right? It's harder to do good work?

That could be just an excuse, frankly, because if you think about healthcare work, pharmaceutical work—emotion, empathy, all of those things are built into the conditions that we work on. Part of the problem could be that these products are life-changing unto themselves, and perhaps people don't try to make the advertising as life-changing as the product. They forget to tell the story behind it. That's a shame. I think you can absolutely do amazing, best-in-class, best-in-category work in healthcare. I will always believe that.

Those two examples that you just gave—neither was for pharmaceutical products. But an example that I like to use is "Breathless Choir" from three or four years ago? There is no reason why "Breathless Choir" couldn't have been done for a COPD product for a pharmaceutical drug, instead of for a breathing device. It's just that no one came up with the idea. So, beautiful ideas are being made, and I think people just have to swing bigger and take bigger risks. And when you're working on these multinational clients, it is very difficult to get one thing that works everywhere in the world that is breakthrough.

Give me another example of recent work you admire.

The U.K.'s Project 84 suicide prevention campaign. It's the most impactful installation that I can recall in 10 years. It really got men, who never talk about anything, talking about suicide.

[Note: A day after our conversation, the "Breath of Life" campaign from GSK and McCann Health Shanghai won the Grand Prix in Pharma here at Cannes Lions. Levy said he was "personally inspired by the brilliance and executional beauty" of it—though, full disclosure, Levy did work for FCB Health, the parent company Area 23, when the work was made. However, with the Grand Prix, there was only one other Gold Lion given out in Pharma—for Area 23's "One Word" film for The Learning Corp.]

Is there a culture in healthcare where creativity is less valued?

Blaming things like regulation—I think that's just a convenient way of saying, "We just didn't do it, or not good enough." People don't want to hold the mirror up and say, "Well, I just didn't come up with the idea." I think it can be done. I think it will be done. And the agency that does it will be put up on a pedestal. It will definitely happen. It's just a matter of when.

There's a lot of experiential stuff happening in healthcare lately.

That goes back to my earlier comment where it's a part of a larger campaign. All this experiential work that's being done at conventions and congresses, and pop-up stores in Times Square—they're small parts of larger campaigns. It's small in scope. It has a limited time frame. But more and more pharmaceutical companies are doing really cool stuff with activations. It's, right now, probably my favorite part of the industry.

It seems like it frees them up to do something a bit more dynamic.

True story: We did an activation for one of our clients at a big show last year. And a different client saw what we did—didn't know it was us who did it—and came over and complained, and said, "How come you guys don't do stuff like that?" And we said, "Well, we did do stuff like that, because we did that one!" It was a completely different category. You just need to have the willingness to do it. And I think, now, the other client has a greater appreciation for what's possible.

That raises the question: On the client side, how much motivation is there to do better work?

I think a lot. Last year, one of our clients sent one of their agency relations people to Cannes. They stayed with our group pretty much the entire time they were here, following from place to place. When we would go to a show, they would go. When we'd go to a speaker, they would go. When I was viewing work, they came with me to view work. They went back and wrote an entire internal memo about why raising the level of creativity is important. And ironically, some of their work is shortlisted today. So maybe it made a difference.

Anything else you're excited about in healthcare marketing?

The biggest thing that I'm excited about is innovation, creating new products. They are very few print campaigns shortlisted this year. Most of the work is mobile, web, experiential. Film and film craft. You're starting to see more 360 around an idea being rewarded. And that's very exciting because all of those parts will someday make a single great campaign. Someone will crack the code and there will be a great campaign that's experiential and mobile and activated in print and out-of-home and crafted beautifully. And it will win the Grand Prix.

What was interesting to you about Klick? Why did you want to come over?

As a creative person, you're always trying to do new things. Klick's company that is hellbent on doing new stuff, from their labs, where they're inventing things, to just the way the company is structured. It's definitely a very different model than than the other agencies. And they're looking to reinvent what the agency/client model looks like. And it's exciting to be a part of something that still a very startup mentality, but is 900 people strong. Ten years was a great run at FCB. But then this came up. And I'm like, "Ah, let's do this."