How Rethink Made an Unburnable Copy of The Handmaid's Tale 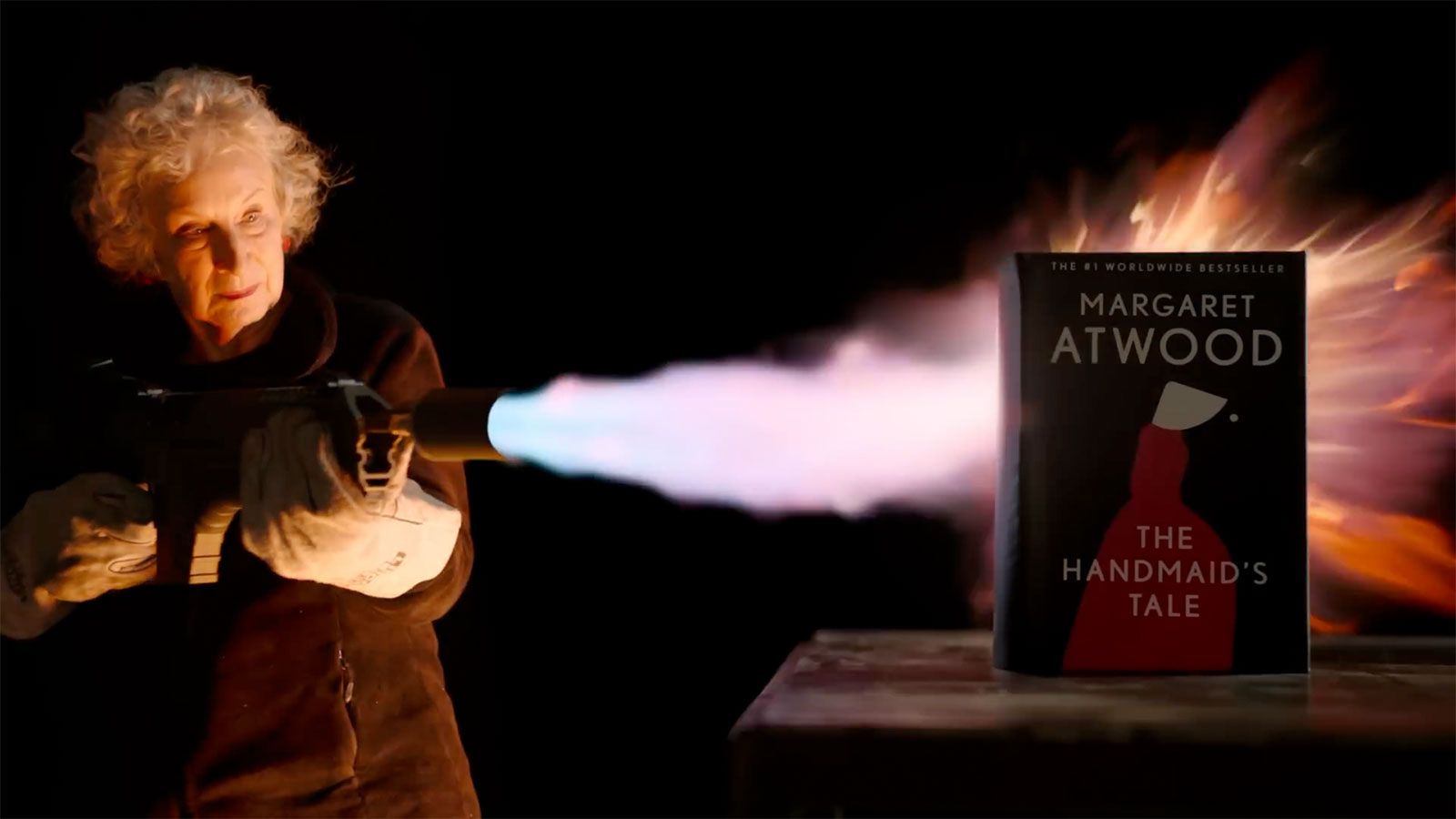 The world might be on fire, but one copy of Margaret Atwood's The Handmaid's Tale will stand the test of time—and its flamethrowing author.

The agency Rethink worked with Penguin Random House and Atwood to create an unburnable edition of her 1985 dystopian classic, banned "sometimes by whole countries, such as Portugal and Spain in the days of Salazar and the Francoists, sometimes by school boards and sometimes by libraries," Atwood says in a statement.

Printed and bound with fireproof materials, the book is up for auction at Sotheby's through June 7, with all proceeds benefitting PEN America, an organization that fights for free speech. The special edition was created in response to the nationwide uptick of banned books in schools and libraries.

Atwood debuted the unburnable edition in the video below, where she tried and failed to burn it with a giant flamethrower. That image of a renowned 82-year-old wielding a flamethrower is as amazing as it sounds.

The Unburnable Book: The Handmaid's Tale

The book was constructed in Toronto by The Gas Company and manufactured by print and bindery master craftsman Jeremy Martin.

We caught up with Robbie Percy and Caroline Friesen, creative directors at Rethink, to learn more about how this idea came about, how much they hope to raise for PEN, and Margaret Atwood with a flamethrower.

Can you explain how the idea came about?

Robbie Percy and Caroline Friesen: The idea first came about when we saw the list of books that was banned in Texas last year. We started looking into it and saw just how many challenges and book bans were happening, and that in some places elected officials were even threatening to burn books.

We asked ourselves, well, what if they literally just couldn't do that? We looked into it, and with the help of The Gas Company we realized that the materials actually existed to create a book that's impossible to burn, and we knew we just had to do it.

Was there a campaign brief?

This was actually a project without a brief. We saw what was happening with the wave of book bans and wanted to do something about it. Once we had the idea, we reached out to Penguin Random House, and they were really excited to make it happen.

What's the message that you hope the Unburnable Book relays?

For us, the book is a symbol of the importance of free expression and a reminder of just how important it is to protect stories like The Handmaid's Tale. Having access to a diverse range of opinions, perspectives and voices is so important for young people and for our society as a whole.

What's the starting bid for the book?

Were there any challenges in creating the book?

The bigger challenge was figuring out how to actually make it unburnable while still making it feel like a real, usable book. Doug Laxdal from The Gas Company had the really neat idea of using cinefoil, a material used in film production to wrap hot lights. It's technically metal but is as thin as a regular book page and can withstand immense heat.

Was Handmaid's Tale the only book considered, given it's been a banned book and there's a fight for women's reproductive rights?

In the beginning we talked about a few books, but The Handmaid’s Tale always felt like the right fit. It's been the subject of book bans and challenges for years, and it deals with the same issues of censorship and free expression that the book is taking a stand against. And unfortunately, the story only seems to be getting more relevant as time goes on.

Was Ms. Atwood on board immediately, especially with using the flamethrower?

She was on board right from the start. The whole idea has a certain element of mischief that I think really fits with who she is and everything she does. And yes, she was especially excited about the flamethrower. The visual of her attempting, and failing, to burn her own work is such a powerful one and all of us, her included, were really drawn to that.