Cartoons and animations awash in whimsy

Diageo's Ketel One invites the world to "Drink Marvelously" in a series of hand-drawn cartoons and animations.

Now, when using humor to advertise vodka, you might expect dry wit in the mix, but that's not really the case here. Instead, the ads, developed with creative shop Fig, are awash in whimsy, with a style reminiscent of New Yorker illustrations.

First up is a martini's crosstown balloon odyssey, with a mustachioed cloud-face blowing in to lend a hand:

Our fluffy friend returns in this next ad, providing an unexpected assist at the bar:

Finally, ol' Cumulonimbus clears out, as a party crasher parachutes onto a roofdeck:

"When digging into the vodka category, we thought about how we could pivot from the status quo in way that still felt authentic to Ketel One. How could we turn this family-made vodka into a fun experience?" says Fig creative chief Scott Vitrone. "In the early days of campaign development, we had loose sketches up on the wall that we kept coming back to. They felt distinct and true to the simplicity of original communications from the brand. So we embraced that and evolved it to what you see today."

Spots will break in New York and Los Angeles during Fox's telecast of the 71st Emmy Awards on Sunday, followed by a national TV and digital flight in October, along with outdoor iterations in various markets.

That push includes monochrome panels with splashes of color: 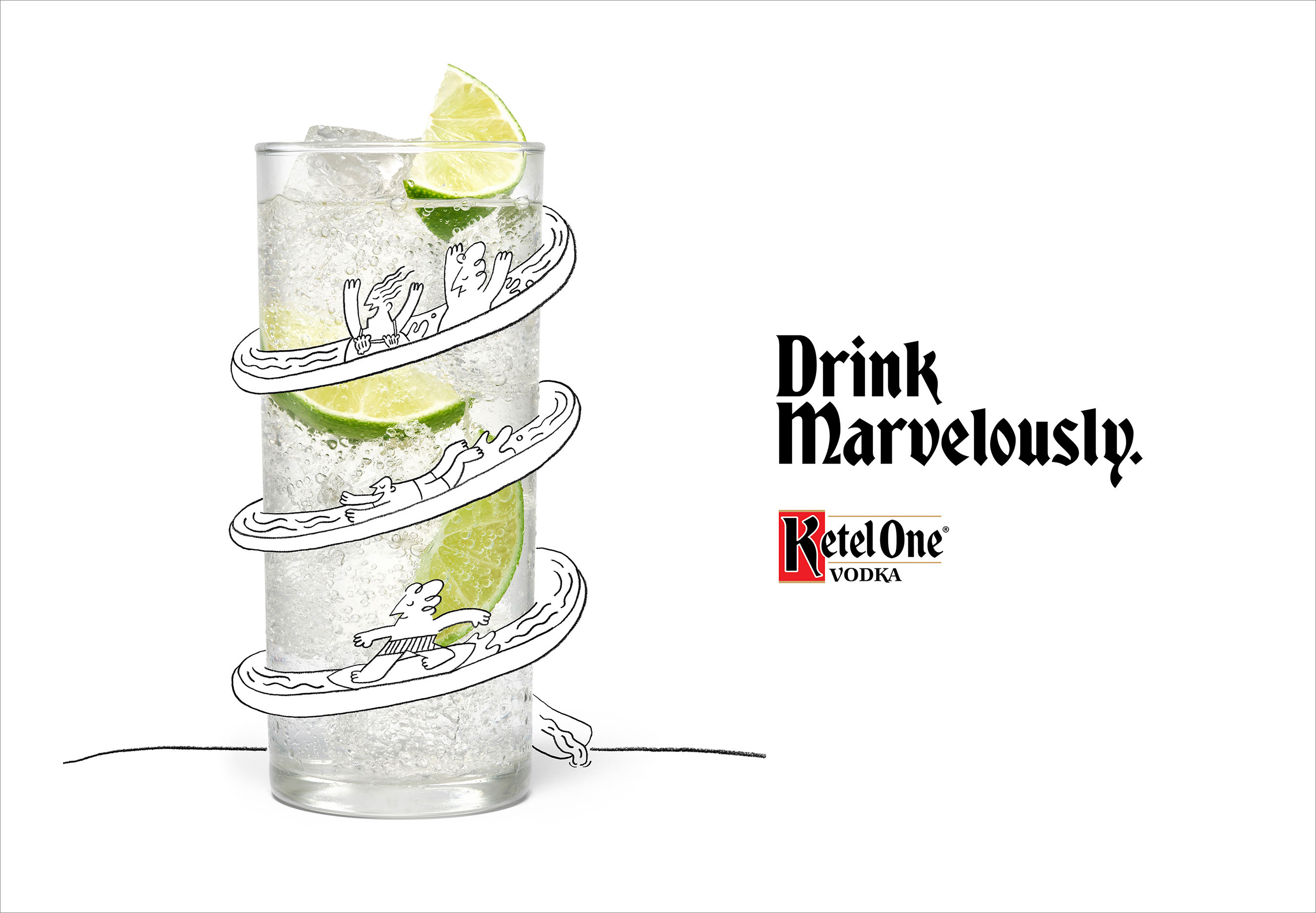 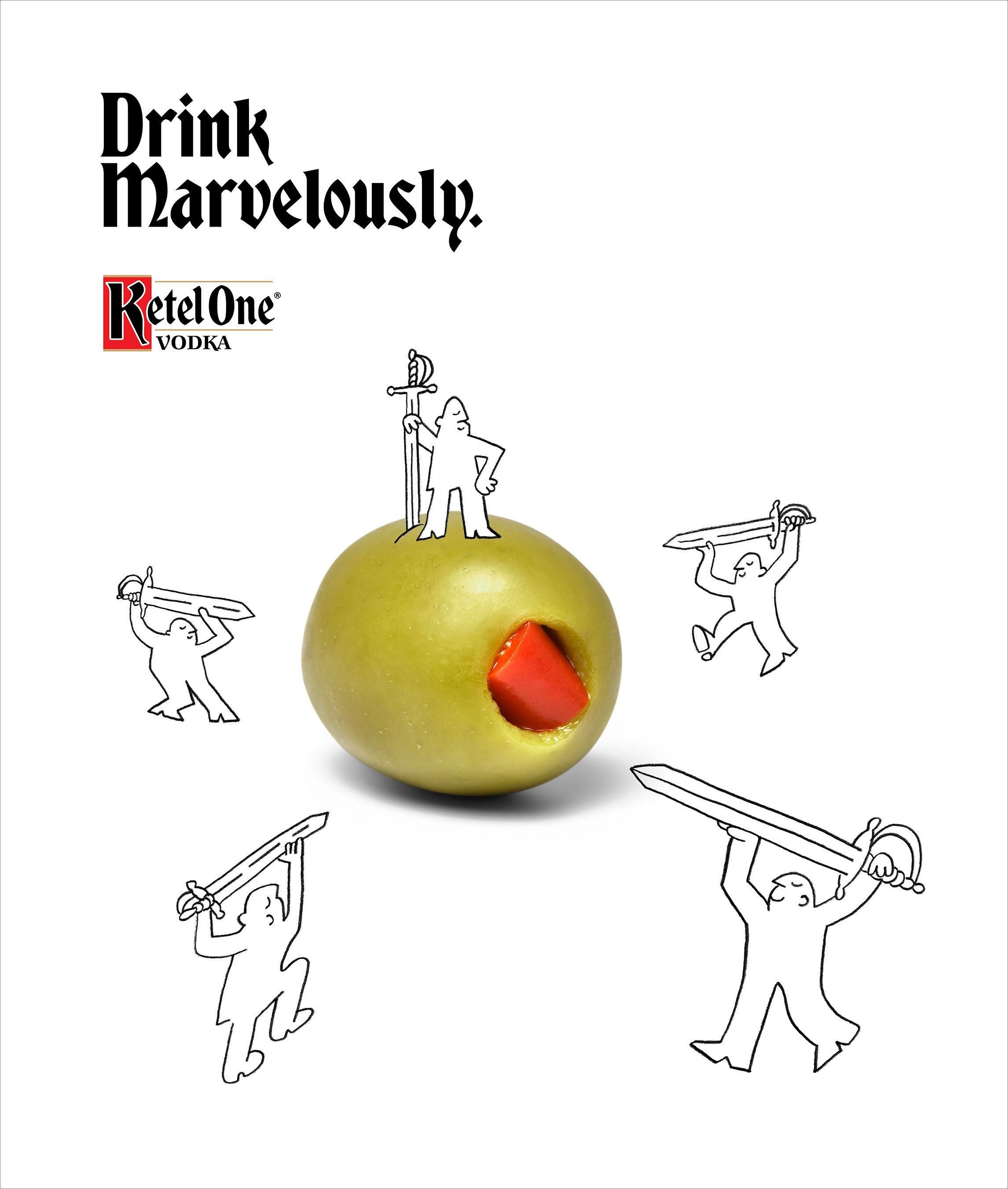 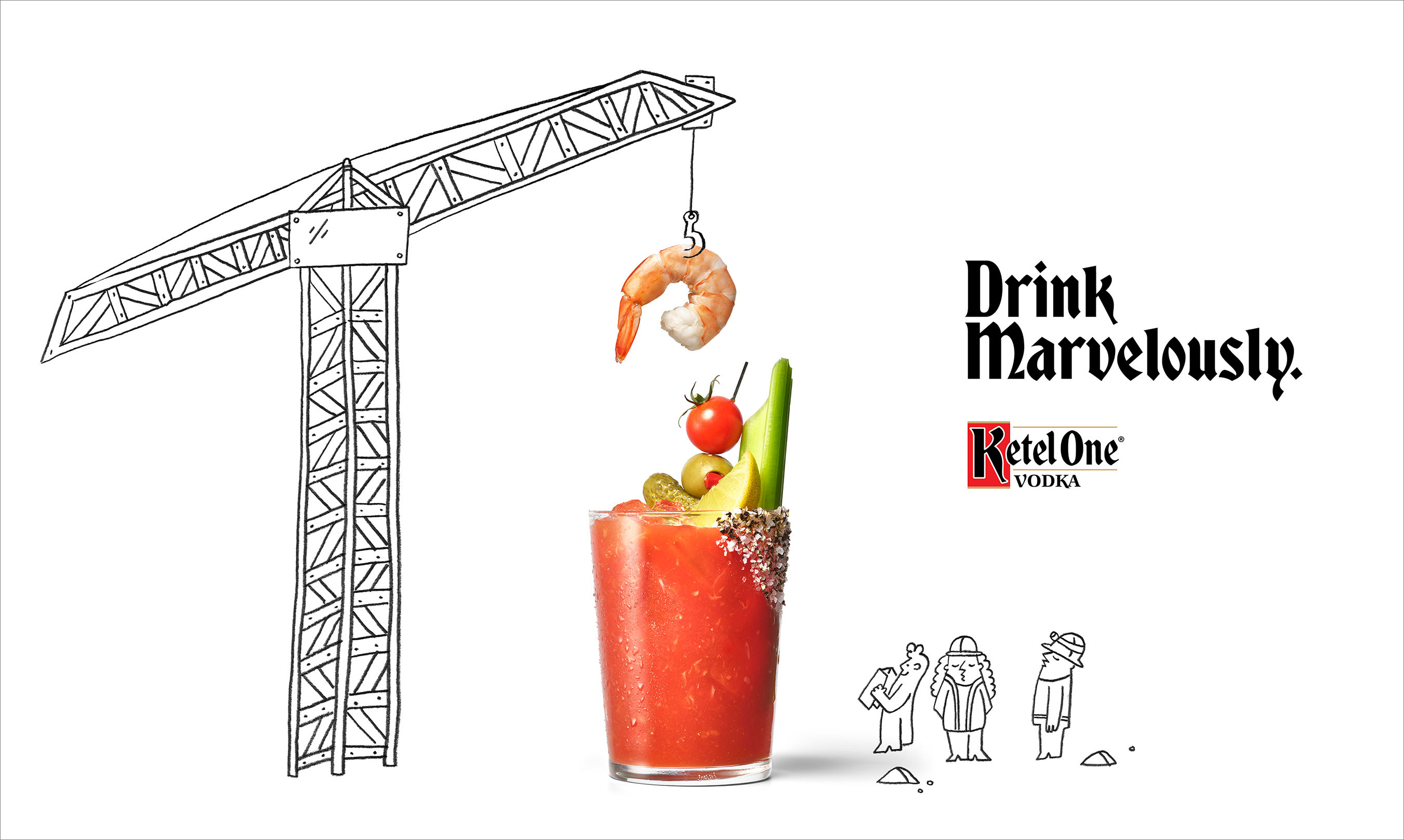 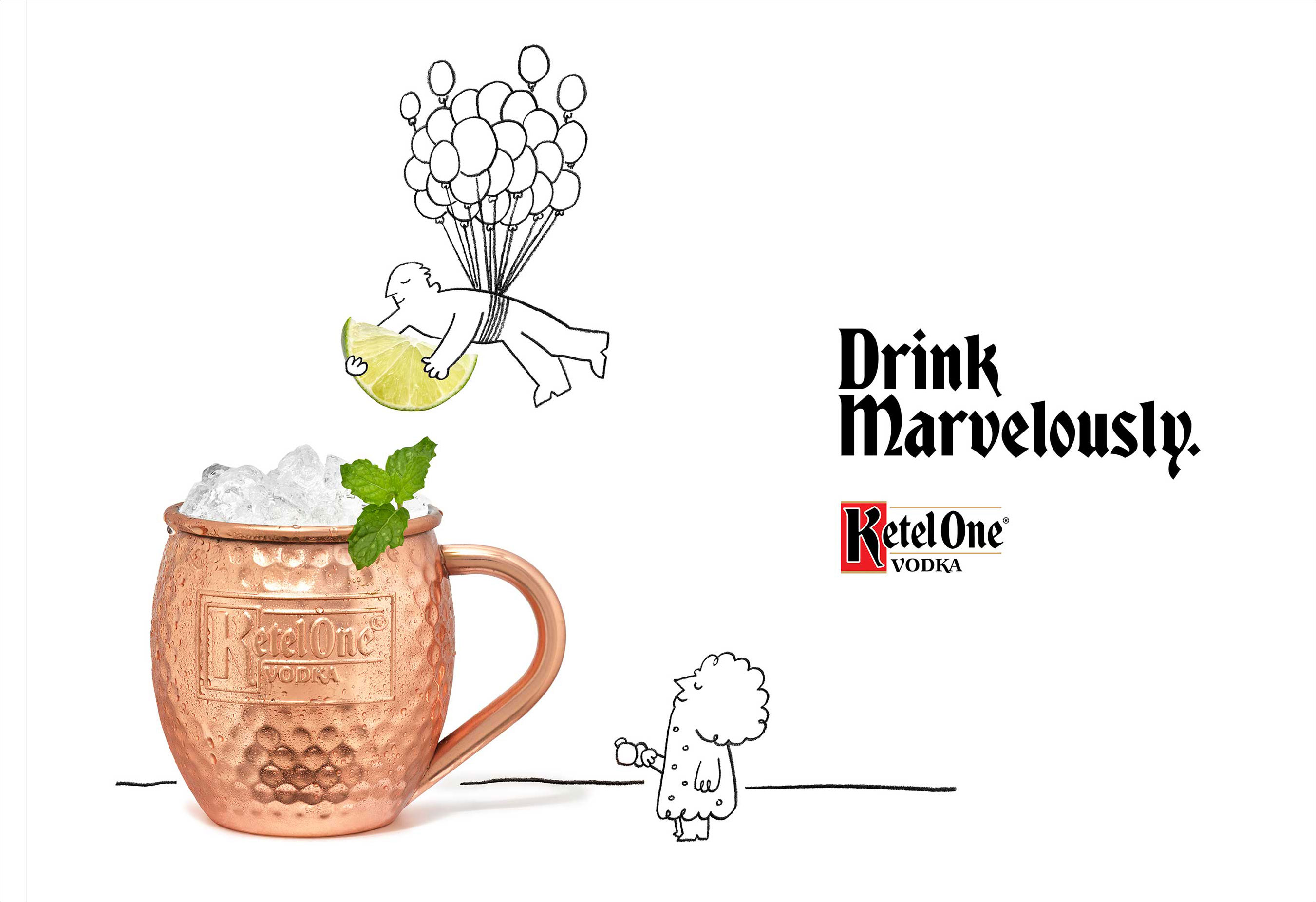 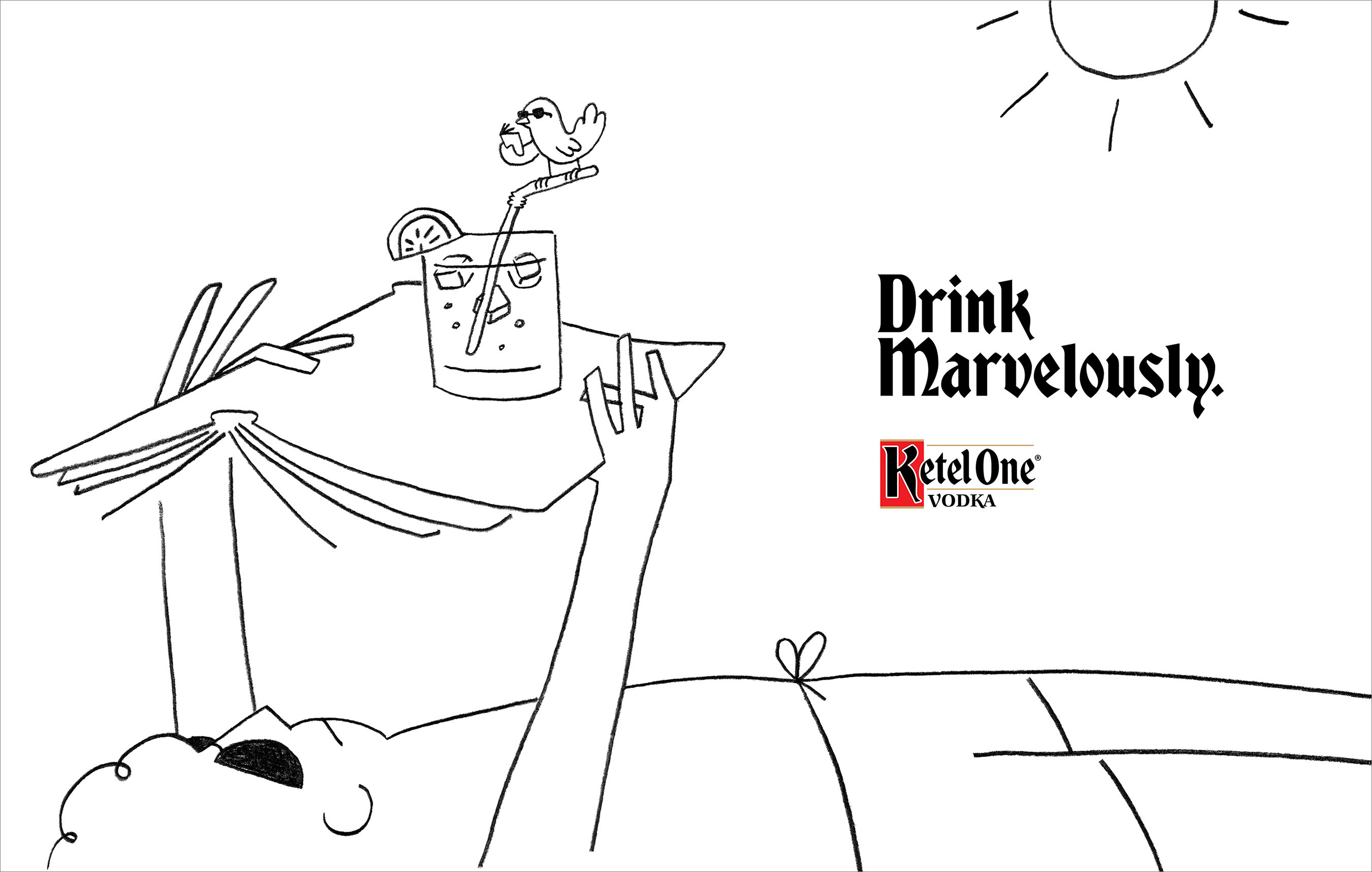 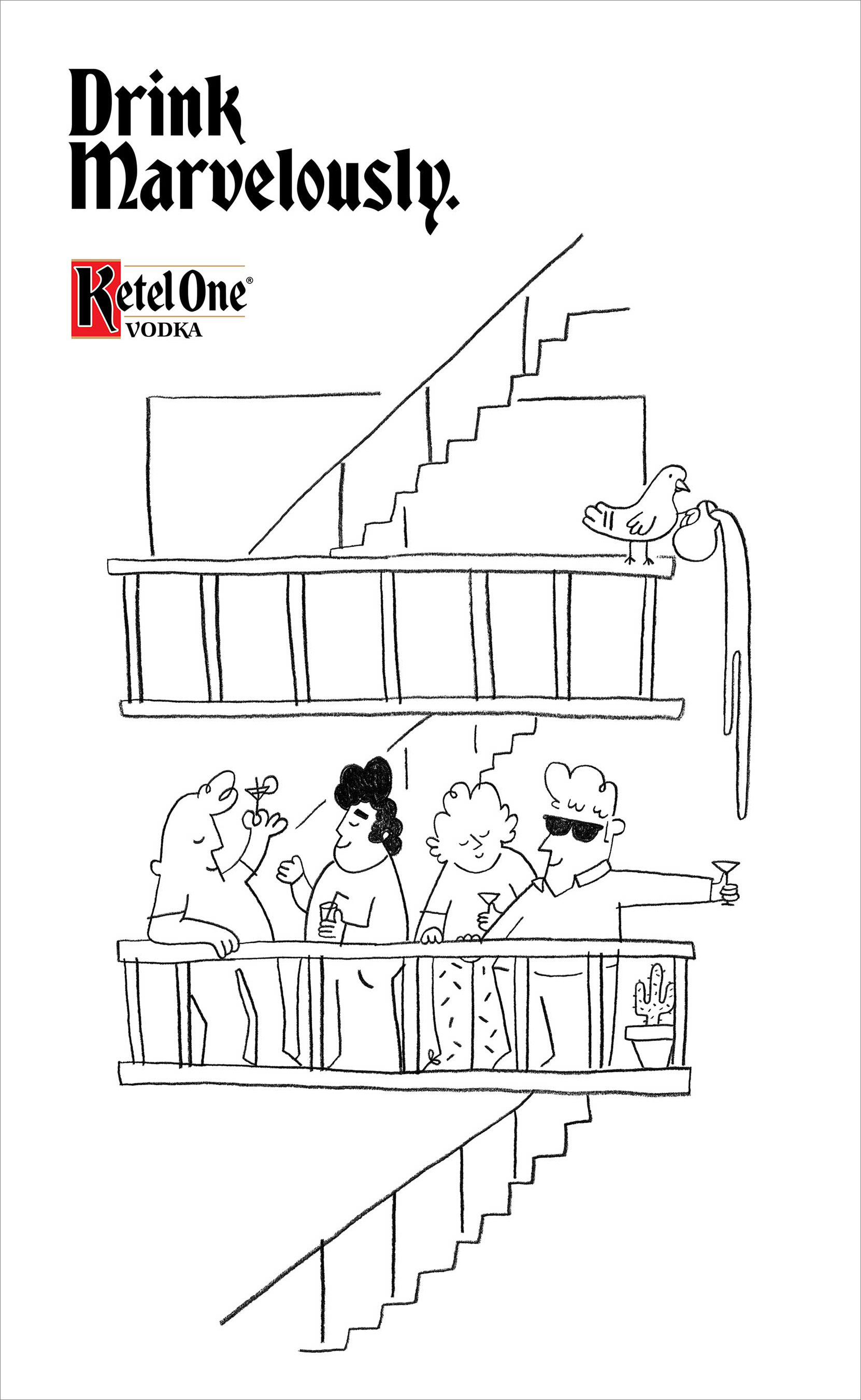 "We weren't inspired or taking cues from The New Yorker, but it does have a timeless feeling like The New Yorker," Vitrone says of the campaign. "The illustration style does an incredible job of distilling an idea down to its simplest form and using very few lines to tell a larger story."

Positioning the vodka as a drink for all occasions, rather than an exclusive indulgence, was paramount.

"We aimed to create a world where everyone is welcome," says Vitrone. "Anyone can look at one of our ambiguous characters and put themselves in their shoes—even if those shoes are on a person suspended by balloons dropping a lime into a Dutch Mule."

Unlike some work in the category, he adds, "our campaign isn't centered around success or status. It doesn't tell consumers what they should be aspiring to or wishing for on their nights out. It just shows a bunch of characters having a great time being themselves and enjoying life in the most marvelous ways they can."

In addition, Ketel One tapped mixologist Charles Joly to create special cocktails for Emmy events, including the Governors Ball afterparty. There's even an Emmy Awards kit available from Cocktail Courier, so folks can sample Joly's Marvelous Mules at home.