How to Halt STIs Among Seniors? Package Condoms Like Garden Seeds 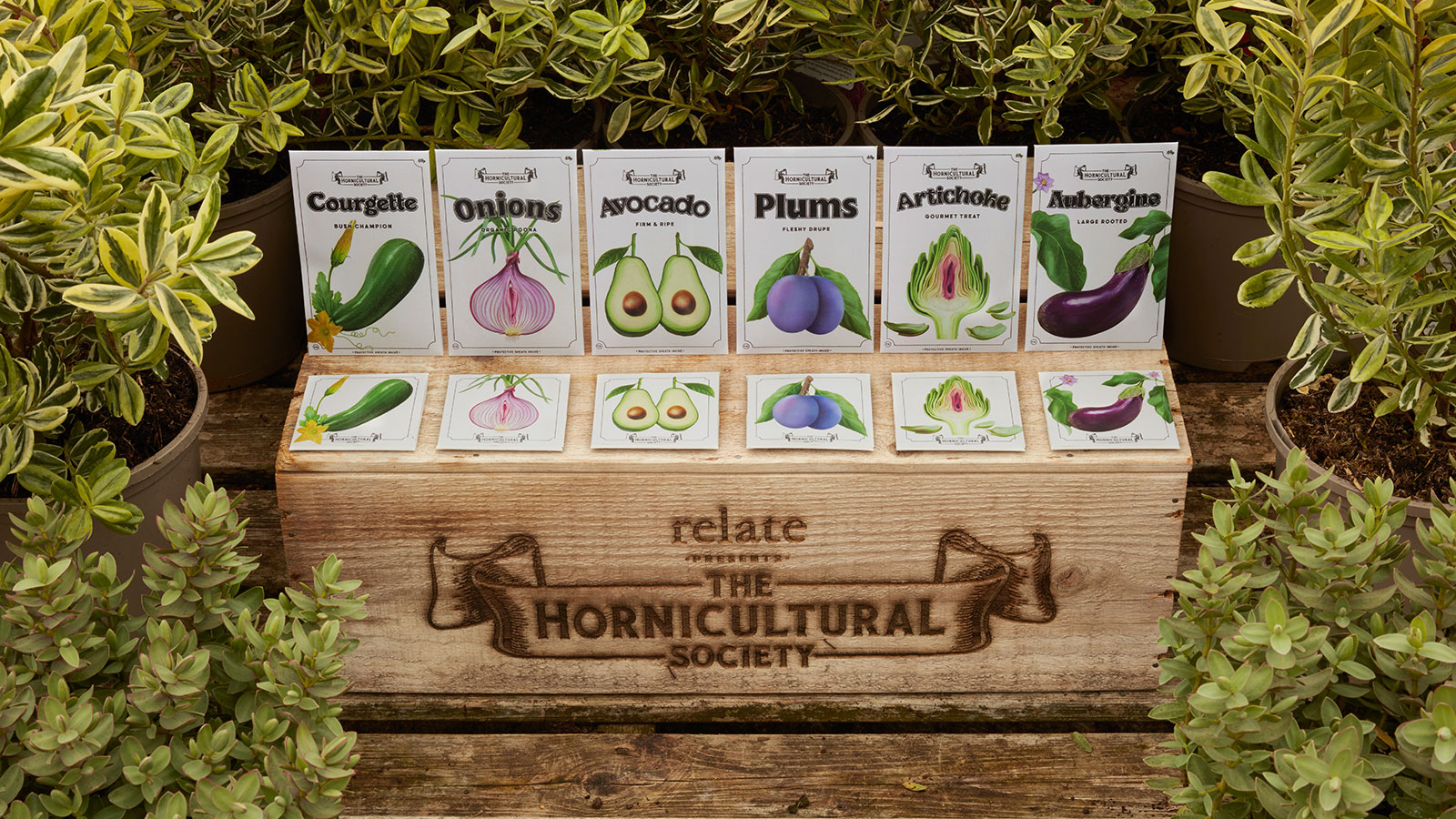 Did you know one of the top pastimes for U.K. residents over 65 is gardening? Another is sex. Grandma might not be tech savvy, but she knows all about the eggplant emoji.

Based on research that STDs are on the rise among those 65 and older, Relate, a U.K.-based provider of relationship support, decided to speak to the audience in an unlikely setting—a garden center, during National Gardening Week.

Finchley Nurseries offered consumers "Gardoms," condoms packaged similar to seed packets, complete with suggestive vegetables and cheeky messaging. "Take care when you harden off," begins the package with an eggplant. "The biggest rise in STIs is in the over 65s," finishes "The Hornicultural Society" reminder. In addition to the eggplant, there's saucy pics of plums, avocado, artichoke, zucchini and onions.

Oh, and the condoms can be planted in a pot to biodegrade. Puts a new spin on planting your seed. The campaign, created by Ogilvy U.K., also ran on billboards nationwide. Relate was offering free condoms on their website, but the quantity quickly dried up.

With so much to unpack, we tracked down Nicola Wood and Andy Forrest, creative directors at Ogilvy U.K., to dig deep into this campaign.

Muse: What was the campaign brief?

Nicola Wood and Andy Forrest: The brief was simply to raise awareness of the alarming fact that the biggest rise in STIs is in people over 65, to continue to break down the taboo of sex in later life, and promote Relate's role in helping us to have healthy relationships.

How did you come up with the idea of packaging condoms to resemble seed packets?

To combat the problem of rising STIs, we needed to give the over-65s a solution: condoms. But it was going to be tricky to get the older generation to realize they needed to protect themselves because their sex education was fairly lacking in comparison to nowadays. They associated condoms with pregnancy prevention, and given we were predominantly talking to post-menopausal couples, using protection simply wasn't on their radar.

So, we had to stealthily re-educate them on the role of "johnies" in their sex lives. Andy and I were brainstorming about gardening being a favorite pastime, as well as sex, and in it was a lightbulb moment of "Let's make a brand of condoms that look like seed packets." We cobbled together a Photoshopped image of two radishes looking like breasts on a condom and took it to our chief ECD Jules [Chalkley], proclaiming we wanted to create a brand of condoms, hoping he didn't think we were off our nut. Thankfully he didn't, and The Hornicultural Society was born.

What was the reaction at the nursery?

Both the staff and clientele at Finchley Nurseries, where we launched the condoms in their seed shed, were brilliant and really embraced the idea. The great thing about placing our condoms in garden centers meant we were talking directly to our target audience, and while we had a couple of stiff upper lips on the day, the majority embraced the idea and baskets were brimming with bedding plants and our prophylactics for the bedroom.

What do you hope comes out of the campaign?

That my nan and her friends at bingo would talk about it.

Were there any challenges in creating the work?

Finding partners brave enough to be disruptive is always a challenge, but tenacious work from some incredible ladies at Ogilvy U.K.—shout-out to Katharine Eastel and Rachel Cumbernolan and their team—including Hanx and other garden centers, like Finchley Nurseries, came onboard.

We worked with an amazing illustrator called Marta Zafra to create the detailed illustrations of various vegetables. It was a balancing act of how far we pushed them with various awkward discussions like "Is the labia in the onion too similar to the labia in the artichoke?" and "Let's make sure each vulva is unique." On top of that was the task of balancing the tone of all the copy on the packets, making sure we had the right level of humor while keeping a serious message at the heart.