Project's creators on reclaiming the narrative 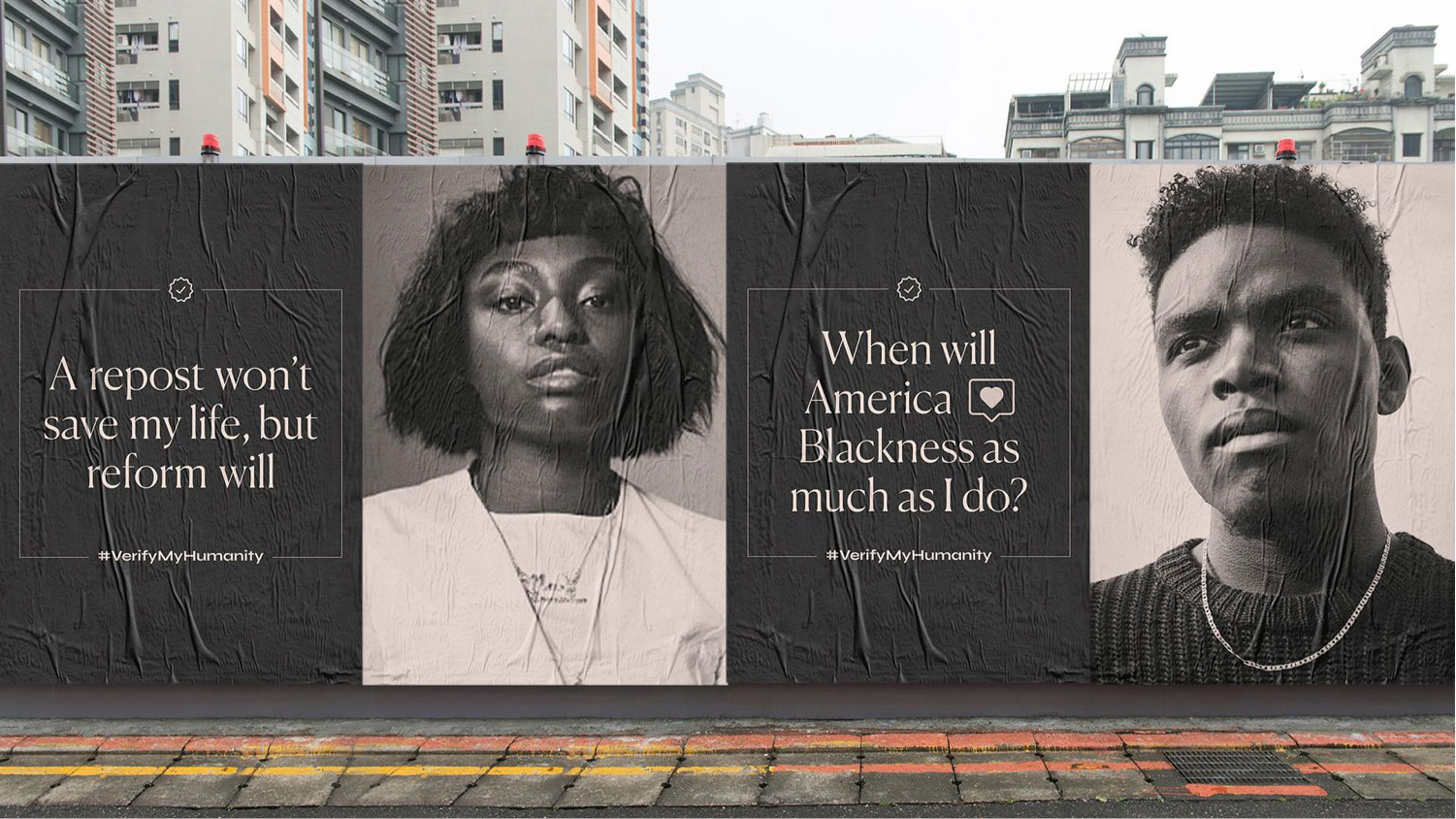 Consider just a few: Trayvon Martin, Ahmaud Arbery, George Floyd, Breonna Taylor, Rayshard Brooks. All were African Americans who met brutal ends, their names and images splashed across headlines and feeds throughout the info-sphere. Yet, beyond the gut-wrenching circumstances of their deaths—their generic victimhood—what do we really know about them?

Each name represents a unique individual, a divine spirit, with hopes, dreams and ambitions. They were many things to many people: sons, daughters, brothers and sisters, fathers, friends. Yet their humanity quickly fades, personalities forgotten, swept away like so much dust and ash.

"The lion's share of conversations on social media can feel short-lived and shallow, in large part because of the storytelling limitations of many platforms," Williams says in a LinkedIn post about the project. "This ephemerality felt especially true for conversations about acts of racial violence. Despite many tragedies becoming trending topics, much of the conversation around the victim/occurrence in our eyes gets confined to a hashtag or image meant to be an all-encompassing obituary."

The pair began the project following the February killing of Arbery. The unarmed black man was jogging in Brunswick, Georgia, when he was pursued and fatally shot by two white men.

"Our plan," Williams says, "was to create something that hijacked the conversation when the next racially motivated act of violence occurred. Something that could spark deeper, more lasting discussions about the victim and wider issues that led to the incident in the first place."

The resulting concept, outlined in a public-facing Google Slides doc, would feature real-world and cyber elements, all designed to help Black Americans regain control of their own narratives.

Wild postings at murder sites would feature quotes from famous black figures on the need for identity and recognition: 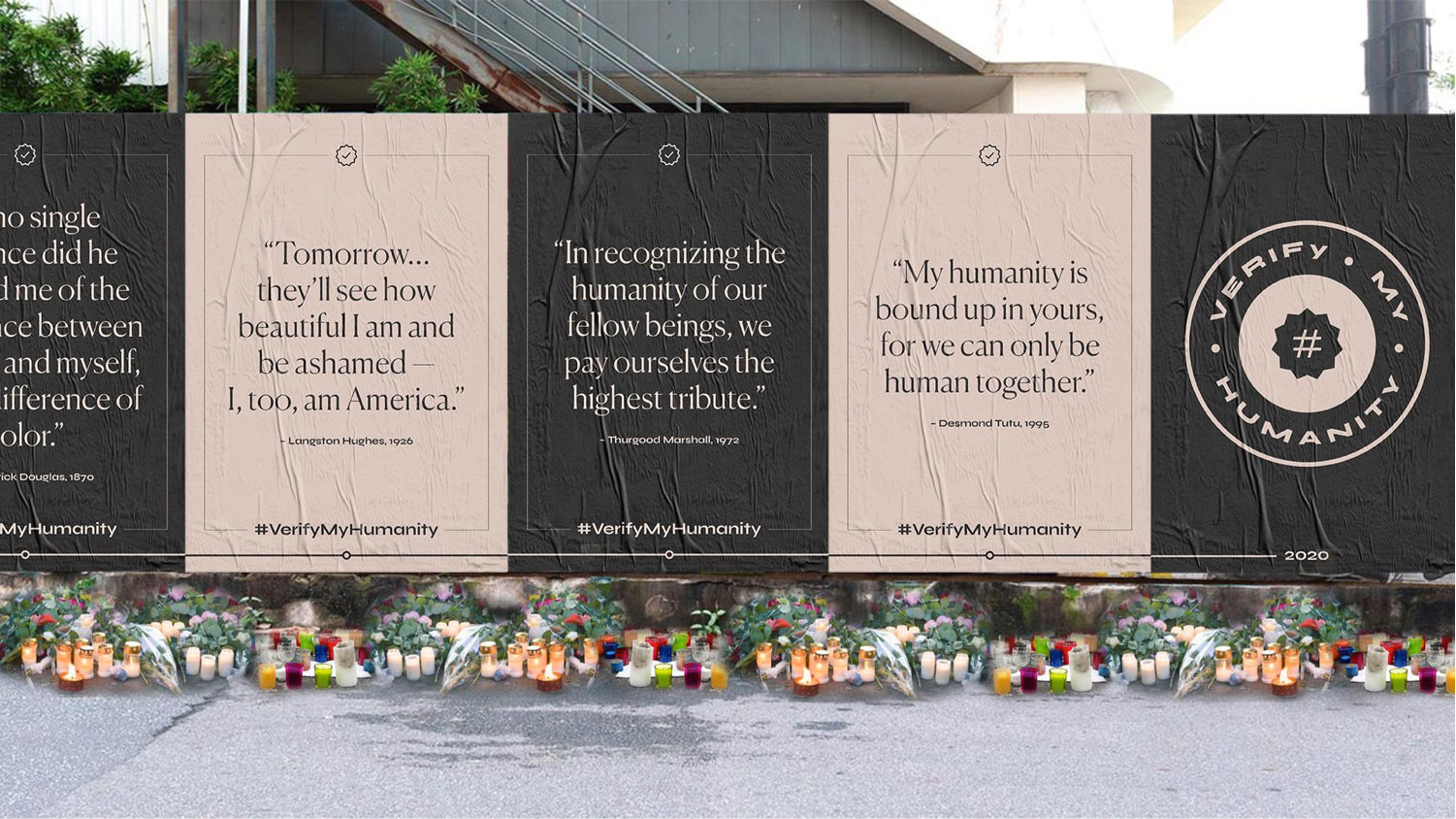 Instagram filters and text overlays would help Black people reclaim their sense of self from forces seeking to lump their stories together or keep them anonymous: 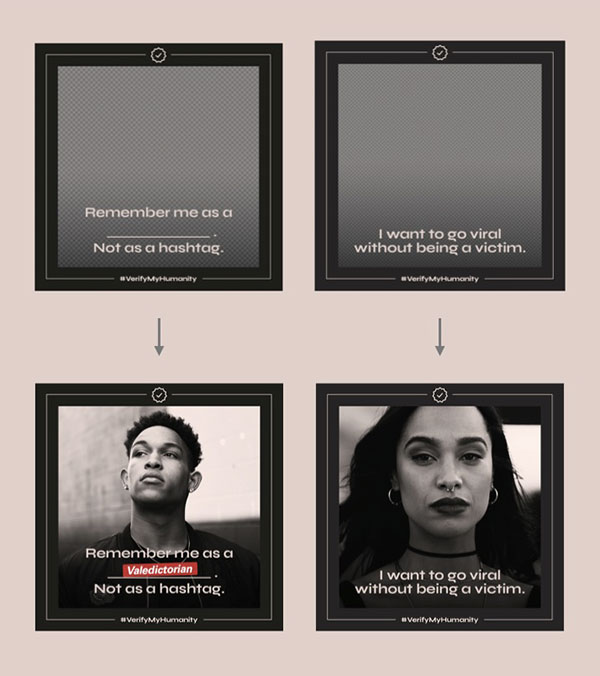 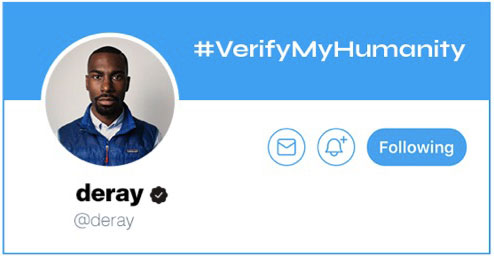 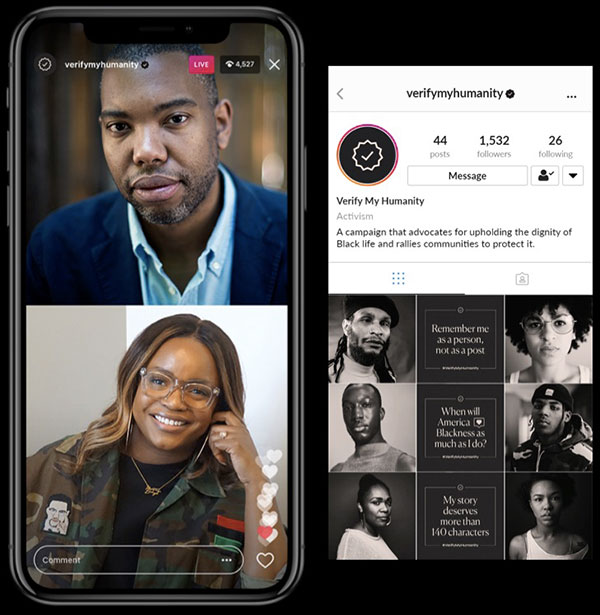 …and a comprehensive website of data and resources "to educate and inform as well as incite real action."

Below, Williams and Thompson field queries from Muse about "Verify My Humanity" and share their views on the racial tensions engulfing America:

Muse: How close are you to making your proposal a reality?

Langston Williams: When we initially decided to do this project, our biggest priority was just getting the message in front of as many eyes as possible. The volume of positive reception has been beyond what we could have imagined and it's given us the confidence we needed to take the next steps.

Currently we're fortifying the campaign proposal by adding a media/connections strategy and some additional creative assets with a team of people from both of our respective agencies. Once we complete this phase, we're planning to start conversations with production houses and social media platforms to get things made. We're interested in moving quickly on this, but we understand, given the importance of the topic, the need for us to be thorough. 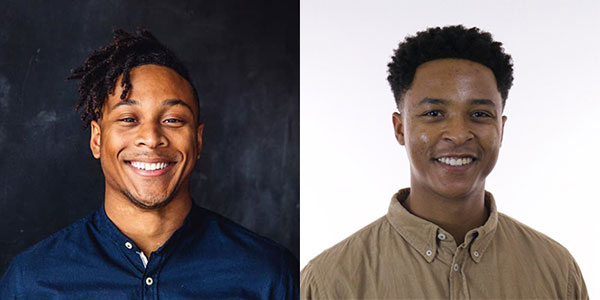 One of the LinkedIn comments notes that your project supports "acts not ads." Can you go into that?

Jaye Thompson: We wanted to approach this campaign as an agent for change and push people to go beyond just a retweet or a post. We believe it serves two purposes. The first is to convey how the attention to violence against Black Americans usually comes too late, after lives have been lost. Second, [the work challenges viewers to] rethink how people participate in activism online. We believe that people's intentions are in the right place and we don't want to dissuade them from engaging in activism; rather, [we want them] to think deeper about the issues and provide resources that lead to actionable reform, so that the next Black boy or girl can make it home safely.

Why is it important for the work to exist online and IRL?

Williams: Something we discussed while concepting was that we needed our campaign to be malleable to and agnostic of any one platform. Social media was a no-brainer for us, given the ripple effect it enables, but we thought having the work come to life offline would bring a greater depth to the message. Processing these senseless murders through a screen is why so many of us have gotten numb to them. But by having the option to engage with the campaign in the world, we felt people could better empathize with the victims and ponder their own mortality. 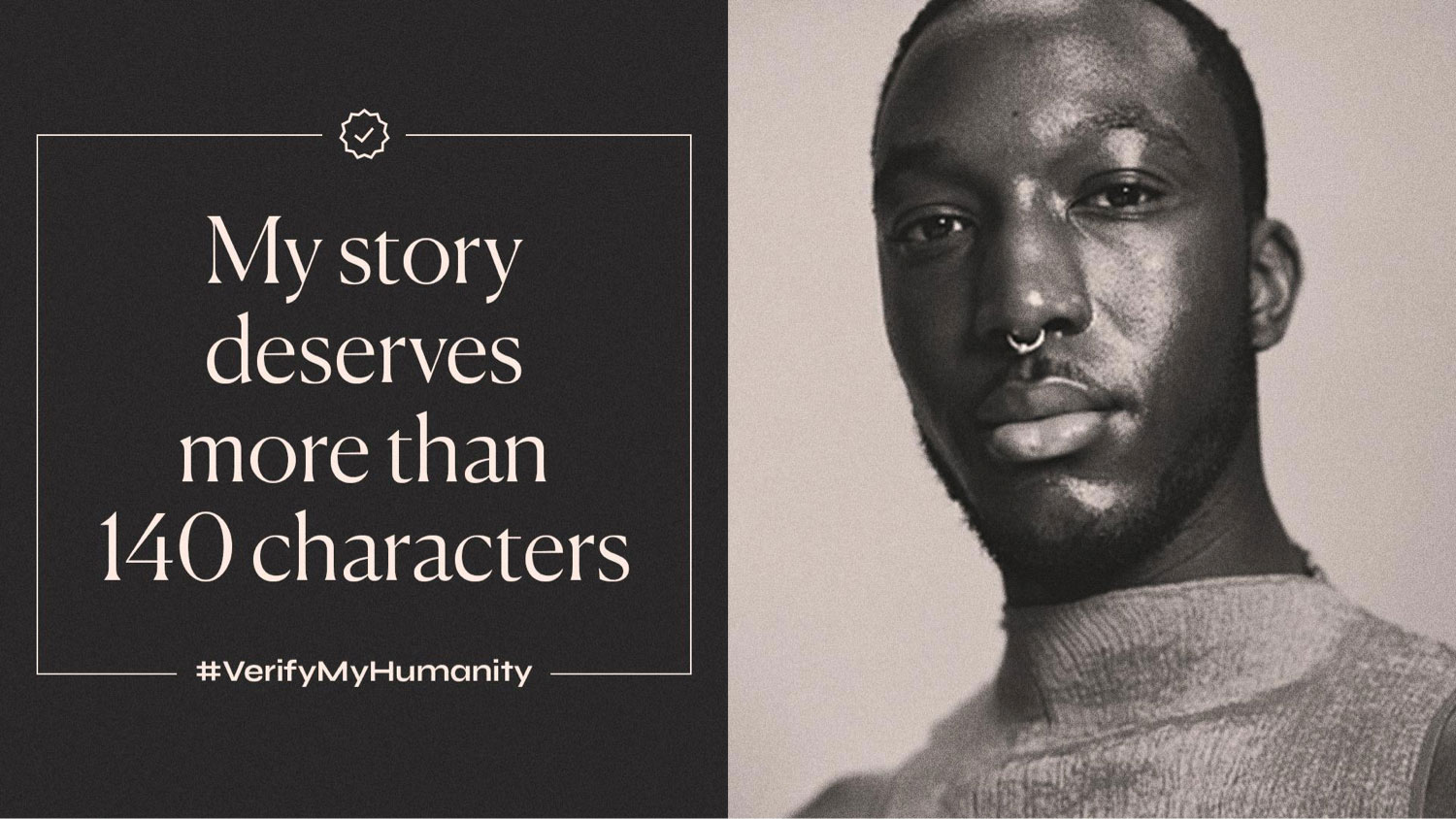 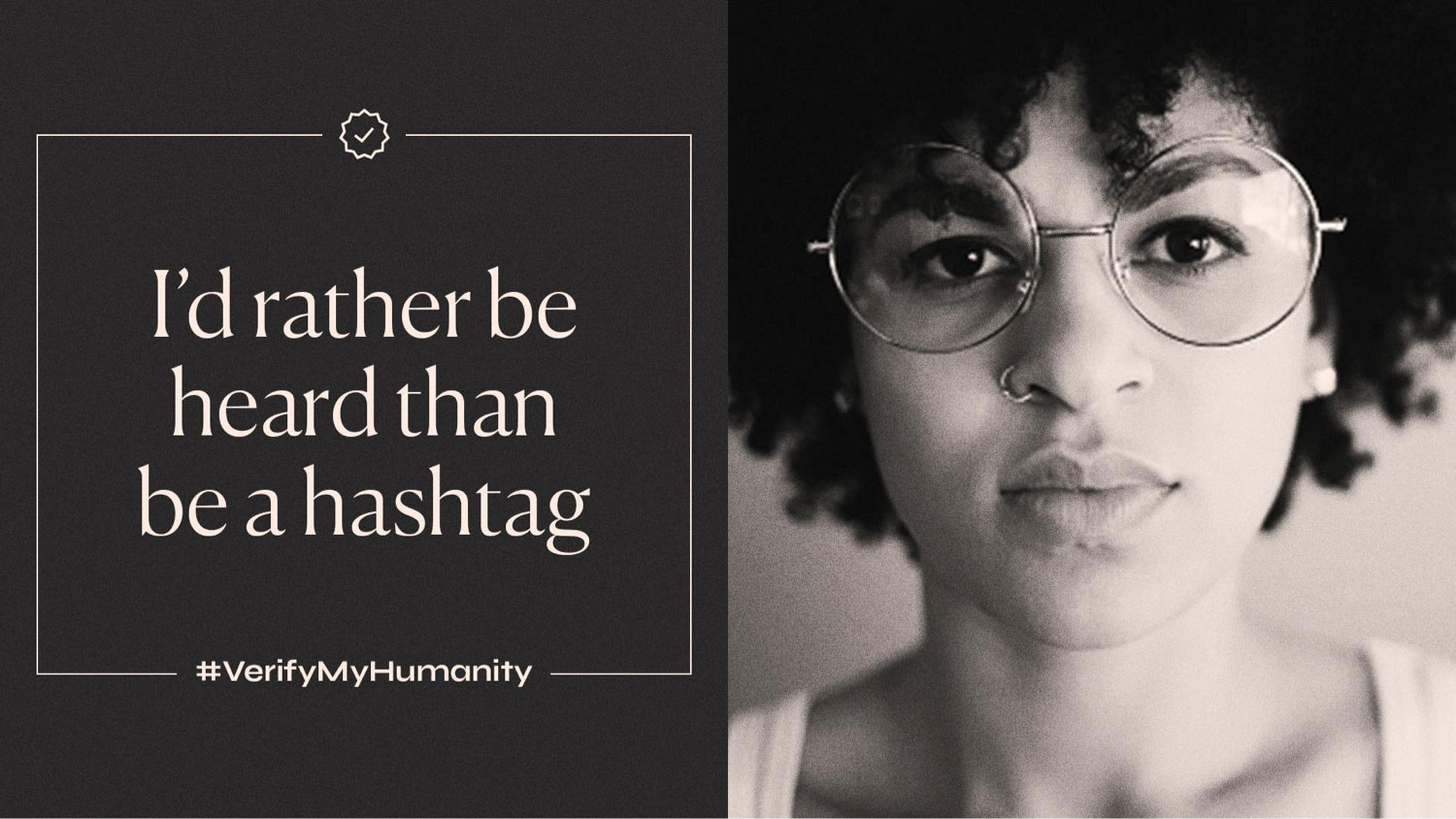 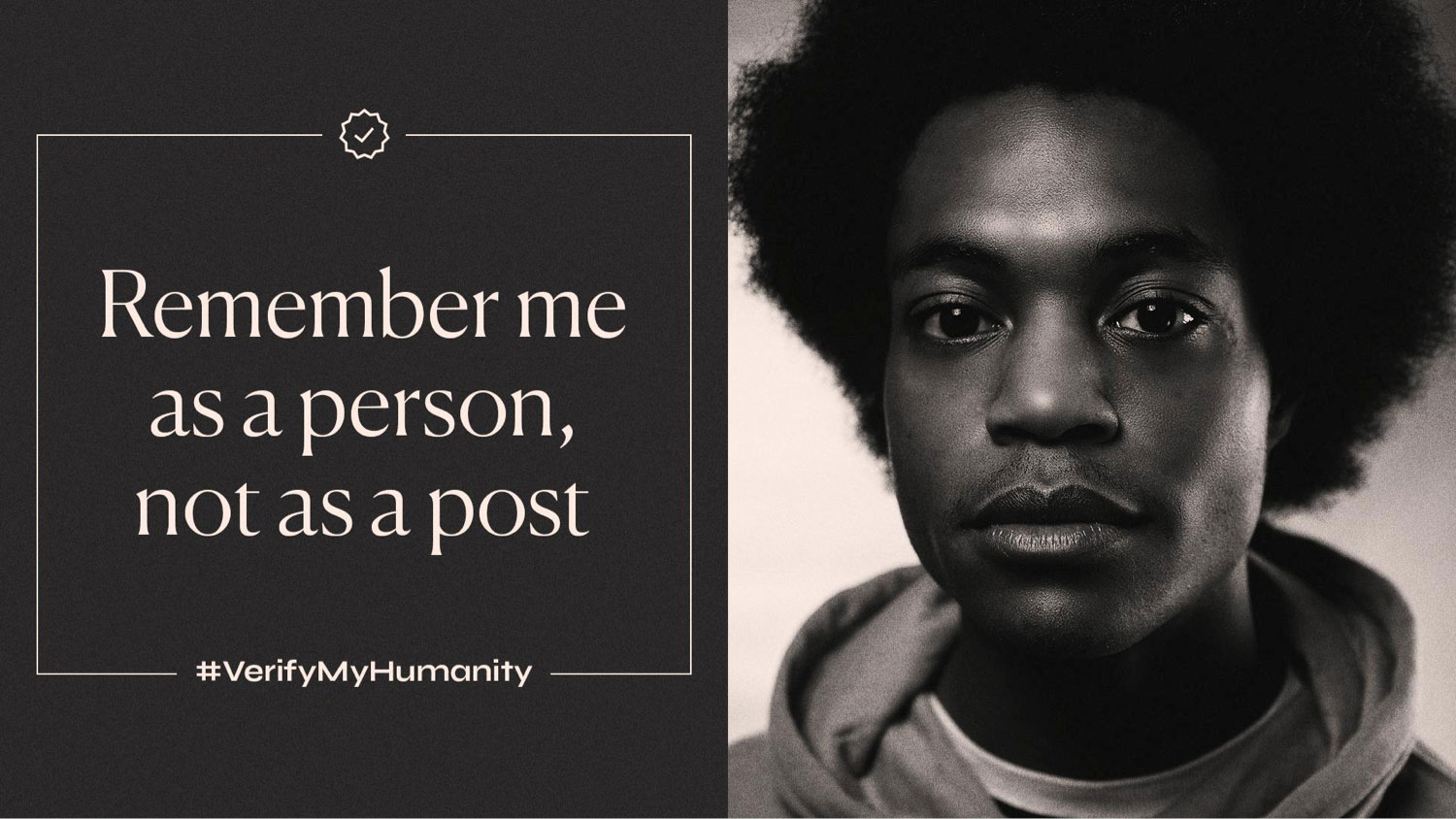 Can you give me an example of a Black person losing their humanity in the fashion you're trying to combat?

Thompson: In 2012, when Trayvon Martin was killed by George Zimmerman a few blocks from his home, the media was very quick to purposefully circulate images that would paint Trayvon in a negative light. Some of the first photographs of him were with his middle finger up, smoking a joint. And the language they used to portray him mischaracterized him as a "troubled teen" or "thug." Malicious depictions like this dehumanize and vilify individuals, which helps justify the harm that comes their way.

Our campaign messaging aims to put the ownership of the narrative back into the hands of Black men and women, while they are alive and still able to advocate for themselves. Hopefully this will encourage conversations and allow people outside of the Black experience to understand some of the internal trauma that is felt when we witness these tragic events.

Why do you think humanity gets lost in this way so often?

Williams: It stems from the media and our society's growing need to synthesize stories so we can move on to the next thing. The volume of content increases each year, which means we have less and less attention to devote to every piece of content. This is problematic because it encourages individuals to cut corners and share the facts they deem pertinent. In the case of the ongoing acts of racial violence, the "non-pertinent details" are bits around who the victim actually was. When you condense anybody of any race's story to 140 characters or a single image you're really doing a disservice to them, and we're glad our campaign can shed some light on this.

Can you give me an example of a brand's social justice work you feel falls into the "performance" space, just signaling virtue?

Williams and Thompson: For us, the statements from brands like L'Oréal, the NFL, NextDoor and Gucci felt performative and rang hollow. These brands made our list because, in addition to lacking language that acknowledged the importance of the ongoing conversation, all of these entities have notorious track records with discrimination. What we've loved about the past few weeks is that consumers are holding brands to task for their hypocrisy. For the brands that have benefitted from Black dollars, there has been a real demand for an authentic acknowledgment of the struggle and a commitment to aid systemic change. The aforementioned brands failed to do this.

To be blunt, though, every company that crafts a PR statement but doesn't take initiative to diversify their leadership, end racial bias in the workplace or improve their hiring practices is complicit in the very problem they're writing statements about. 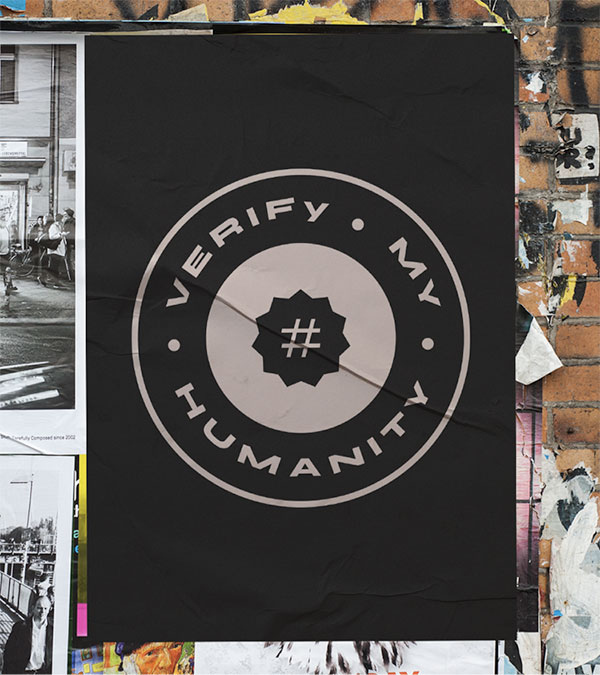 Which brand campaigns on social justice stand out as superior?

Thompson: The efforts from creative collective Saturday Morning and their work with P&G is exceptional because they accurately portray the hard conversations Black families need to have—such as in "The Talk"—or demonstrate how Black men are faced with everyday microaggressions, like ones shown in "The Look." These discussions Black parents have to have with their children to make sure they are safe are becoming more and more dire. Work like "The Talk" and "The Look" helps to take difficult topics and make it accessible yet poignant for those who need to be educated.

Any advice for marketers on how best to address these issues?

Williams: Start from a place of empathy and educate yourself about the history that has preceded the event in question. So often, brands want to be looked at as people when it comes to trading jabs on social media. But when a real conversation starts, they fall silent. Many brands and marketers use the excuse that they're unsure of what to say, but to me that's B.S. Nobody deserves to be treated poorly because of their differences and that's the golden rule of life. By educating themselves on the situation, conversing with those being affected by it, and exercising a shred of compassion, a point of view will materialize for marketers and then their real work can begin.

How would you guide the marketing/media community to foster more diversity and inclusion?

Thompson: It's important that the advertising industry recognizes that the demographics of the country are changing—and that needs to be reflected in boardrooms. We need more people of color and various backgrounds in all of the positions, entry-level to executive. You can't authentically create marketing that speaks to various audiences if members of those demographics don't have some input. Programs like Ad Color and the 4A's MAIP are doing a great job to help amplify new and upcoming voices. I really hope that those programs continue to receive support so they can assist more young people of color who are trying to break into the industry.

Are you hopeful about the future of race relations in the wake of George Floyd's murder? Are we on the cusp of real change?

Thompson: It's hard to say, to be honest. This has all been very difficult for me to process because it feels like déjà vu. I look back to 2014 when Michael Brown was murdered and people went to the streets to protest and advocate. The same thing happened in '92 when Rodney King was beaten by the police. And when people like Colin Kaepernick tried to peacefully protest, the NFL blackballed him from the league. A punishment similar to what happened to Muhammad Ali during the '60s.

The outrage we are seeing is the reaction of people who have done everything possible to enact change, yet still see nothing being done. This time around, it seems like there has been a huge wake-up call for many people, but the issues themselves have never left, they've always been there. What's different, though, is you can't ignore it as easily this time.