But Wenderfalck's project is going as quickly as suffrage

Sweden is known as one of the best places in the world for women to work; it even boasts what it's calling the first-ever feminist government.

But history, written by men, remains pretty dudey no matter where you're from: Apparently only 21 percent of Wikipedia's personal portraits are about women, and Sweden's no exception.

"Today, 12 women are mentioned on the Swedish history article on Wikipedia, and 96 men," Ellie Ekström, art director at agency Wenderfalck, tells Muse (in reference to the Swedish-language Wikipedia page). "So … yeah. Not that equal."

This inspired Wenderfalck and the Wikimedia Foundation to launch "The Equal Edit," an effort to increase female representation in Wikipedia's Swedish history section.

"Our history in many cases shows a one-sided picture of reality," says Ekström. "Countless prominent women … helped shape our society, who are not mentioned in our history today. With 'The Equal Edit,' we want to start the work for an updated history together with Wikimedia and Wikipedia."

"One of the first things we did was reach out to Historiskan, Sweden's first magazine focusing entirely on women in history," Ekström explains. "Eva Bonde, editor of Historiskan, collaborated with us to create a list of women that shaped Swedish society in many different ways, but who aren't included on Wikipedia. This list was made available to the Wikipedia community, to discuss in edit-a-thons to add to articles about history on Wikipedia."

In addition to Historiskan's list, "local history experts helped in identifying women who had a great influence on Swedish history but who have not previously been noticed," adds John Andersson, Wikimedia Sweden's operations head.

Check out the list of names. It includes Katarina Taikon, a civil rights activist, writer and actor; Queen Kristina, considered among the most learned women in the 17th century (she succeeded her father at age 6, but only formally began to rule at 18); and Filippa of England, Queen of Denmark, Sweden and Norway in the 1400s.

Below is a shot of Queen Kristina's Swedish page, which is about a year old. A portrait of her now features in the Swedish history Wikipedia page. 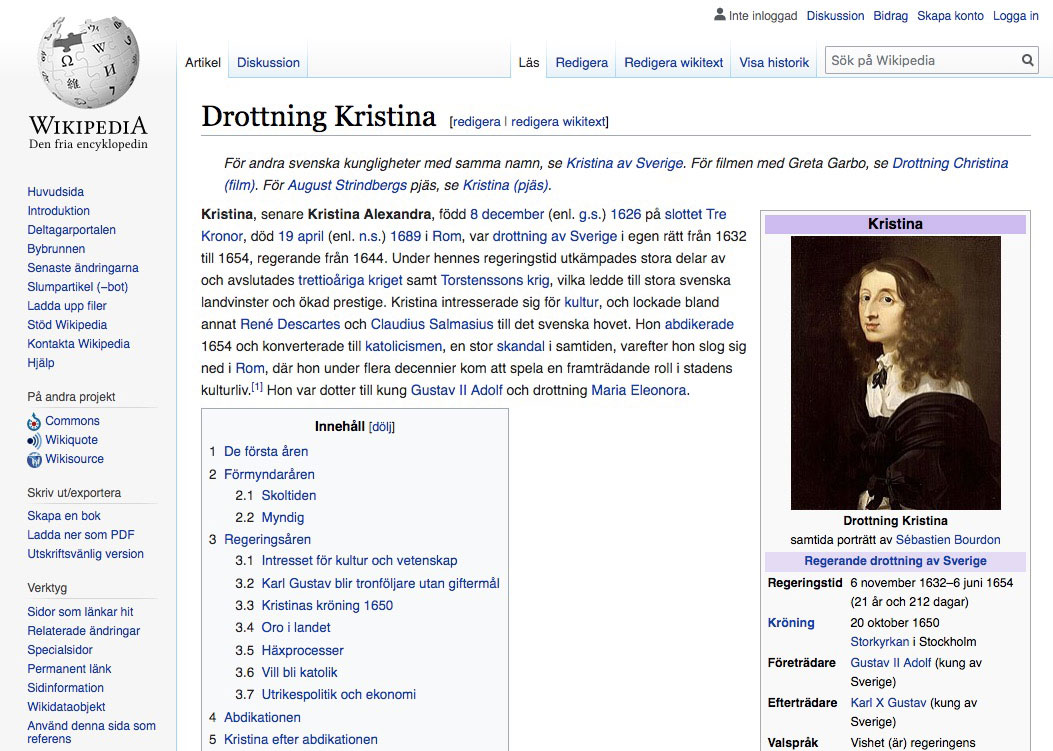 Editing sessions are ongoing. Anyone who's ever created a Wikipedia page, or tried to edit one, knows why: It can involve Jedi-caliber combat with other editors and fact-checkers all over the world.

"The Swedish History article is one of the oldest and most edited articles on Wikipedia," says Wenderfalck copywriter Urban Wirdheim. "Right now, the initiative has sparked several edit-a-thons where several inclusions have been discussed, but it's a long process of editing within Wikipedia to get factual, correct edits. Hopefully we'll see some changes very soon!"

Creative director Petter Rudwall also admits it hasn't all been roses on the backend. "We've seen a massive positive response from all over the world, especially Sweden, of course. Still, some concerned voices are being heard, from men only, which really proves why this initiative is so important," he tells us.

"The Equal Edit" launched alongside the Wikimania conference, held in Stockholm from Aug. 14-18. The gathering's theme was "Stronger together: Wikimedia, free knowledge and the global goals."

Asked whether Wikimedia hopes to continue the work in other countries, Wirdheim says, "This project is currently ongoing, and will be. It's not a classic campaign ... but an initiative that hopefully will not only affect the Swedish history article but several other countries' history articles."

Wenderfalck hopes "The Equal Edit" will do more than remind us of women in the past.

"Wikipedia's mission is to provide complete, factual and accurate knowledge to everyone, for free. Adding historic women who are seldom talked about is a step in the right way of becoming the most complete encyclopedia," says Rudwall.

"Of course, we hope that when writing about history in the future, women will be included just as much as men."