From her underground zine to Aesop, Céline and Ikea

Dever Thomas has been with Work & Co, the digital product agency, for six years—in Brooklyn, then Portland, Ore., and now at its new office in Copenhagen.

She started out as a senior designer, then associate design director, then design director—and was recently made associate partner. In her current role, she helps set and execute creative direction for clients such as Ikea, Apple, Aesop and Virgin America. She collaborates with other disciplines to shape the final product, from initial concept to prototype design. Her work for Virgin netted the Grand Prize at the UX Awards.

Work & Co focuses on making digital products and experiences for brands—things like mobile apps, e-commerce platforms and chatbots. Now 6 years old, it has expanded to 350 employees across six offices in the U.S., Europe and Brazil.

Prior to Work & Co, Thomas was a designer at Method. She received her BFA in graphic design from Indiana University, was the recipient of numerous design-based scholarships and grants, and in 2011 was named one of "Eight Young Creatives to Watch" by HOW Magazine.

We spent two minutes with Thomas to learn more about her background, her creative inspirations and recent work she's admired. 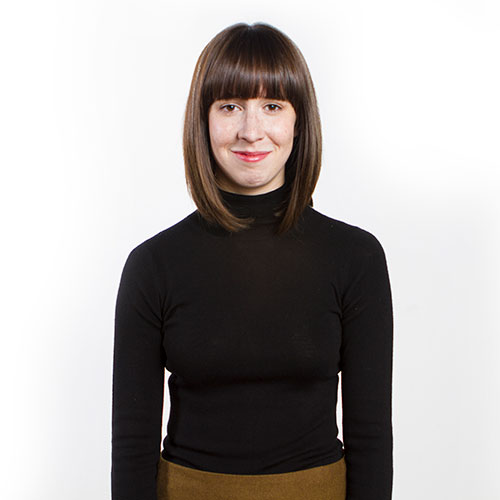 I grew up in a small town called Valparaiso, Indiana. There's one main thing we're known for: corn. Fittingly, Orville Redenbacher is from my hometown. He lived there and built a popcorn factory.

In this part of the country, all the little towns hold their own annual festival, usually tied to a particular crop harvested there. The town over from us had the Asparagus Festival. Ours was, of course, the Popcorn Festival, and everyone made parade floats out of popcorn. It was a pretty great place for me and my three sisters to grow up. I love that it's just an hour outside of Chicago but still very rural.

A city dweller. When you grow up surrounded by acres of farmland, it prompts dreams of escaping to bigger places. I was obsessed with magazines as a kid. As I moved into high school, the internet offered exposure to new people, places, art. I lived on Tumblr and LiveJournal.

I was far from a cool kid—was never into sports or felt like I fit in with any of the groups with very well. Our high school newspaper was called "The High Life," and it was very expected and generic. You know: a feature on the president of the class, or articles about last night's football game.

I wanted to introduce a foil to the expected official paper. So I launched "The Low Life," an anonymous alternative paper that called out the bullshit in our high school, and roped in a couple close friends do it with me.

We would Xerox copies and release them by scattering them on the floors early in the morning. As time went on, I spent more and more time working on the layouts and designing the paper than writing the content. I didn't know about graphic design yet. But the realization that I could so easily create a platform from scratch to express my ideas, and even more importantly that I could distribute those ideas, was a definite turning point.

This was part high school rebellion, of course, but I think when you have a deep dissatisfaction with the status quo, it makes you more creative.

My dad. He's a surgeon. But he's also the type of person who can carve the best pumpkin, draw the best cartoons, and talk about ideas in conceptual, inspiring ways. He really challenged me to not just make things that are aesthetically interesting, but to think first about what I want to say. Impressing him was (and still is) a huge motivator for me.

There was a big one, and it actually relates to that alt paper I created in high school. I don't recall how, but someone at BBDO Chicago wound up seeing "The Low Life" and we got in touch. She invited me to the agency for a day and brought me to meetings to shadow her. During that day there was a female art director I met—I wish I remembered her name—and she pulled me into a cubicle and said, "Never go into advertising." But she did encourage me to pursue design.

They then told my parents about a pre-college program they thought I should consider enrolling in at RISD. Growing up as one of four sisters, I didn't think I would really have a chance to go. But one afternoon I came home and the brochure for the summer program in Providence was wrapped in a bow on my bed.

That was life-changing because I experienced not just college but art school, a year early, in the summer of my junior year of high school. As a result, when I started college I knew design was exactly what I wanted to do. For some people this can take a really long time, so I feel really grateful. From there I knew I wanted to get a BFA in graphic design. I went to Indiana University (my parents gave all of us sisters two choices: IU or Purdue). They also insisted I double major in business … so I took a lot of entrepreneurship classes, and as much as I didn't want to, it has helped me in unexpected ways in my career. Solving design problems is often related directly to the need to solve a business problem. Plus, it's also a really great practical skill—having a general understanding of finance is valuable and useful for anyone.

John Mellencamp, a fellow Hoosier, was my first concert. Today I'd say Wilco.

Jenny Holzer. The way that images and text come together has always interested me, and there's so much power and boldness in the way she executes that in her work. My favorite piece by her is a cinema marquee that says: "It is in your self-interest to find a way to be very tender." 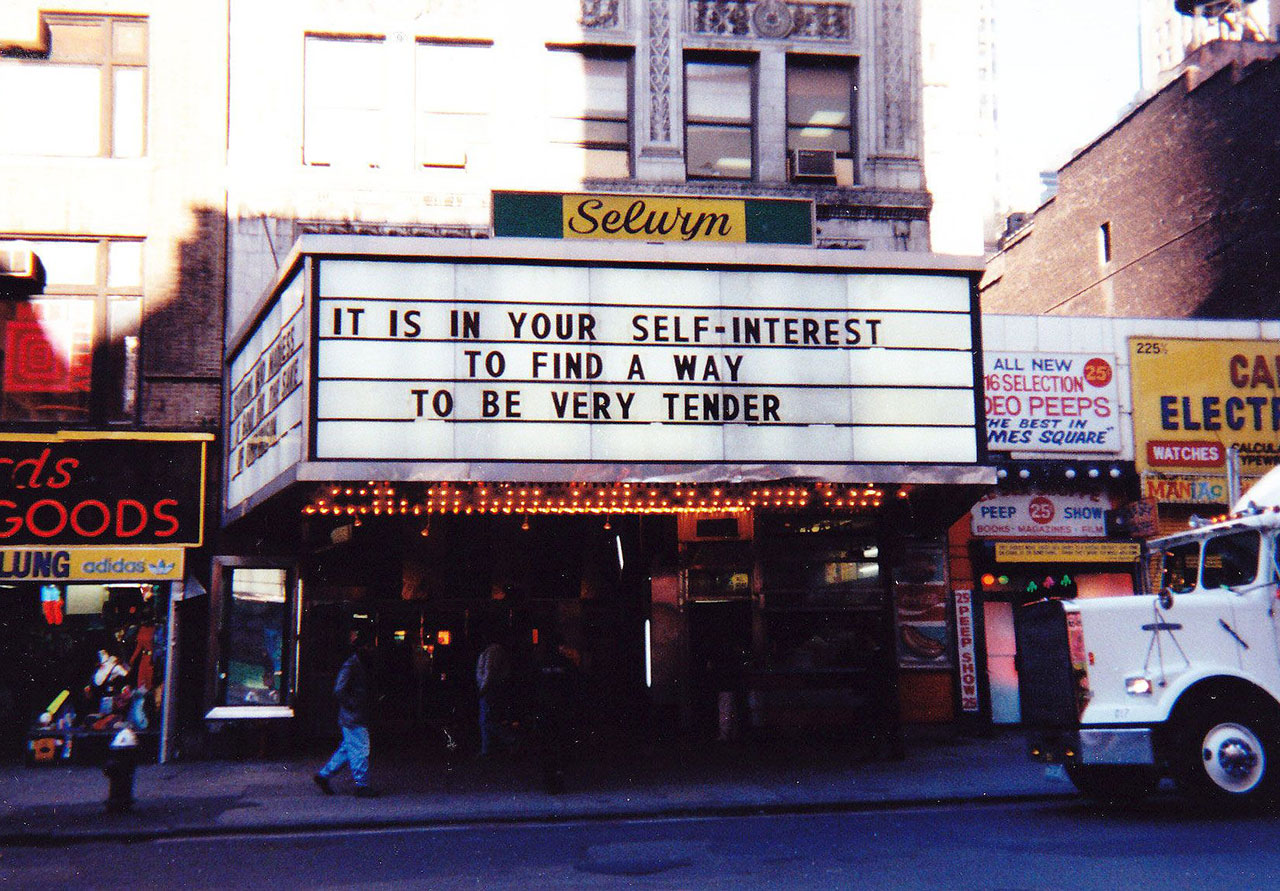 Normal People by Sally Rooney. Her raw talent is incredible. She's accomplished so much at such a young age—she's not even 30 yet.

Lost in Translation. Really, anything Sofia Coppola has made.

I have two. The first is designing the digital experience for Aesop. They were amazing collaborators and weren't content with making just an e-commerce site. The navigation we introduced was totally new, but our clients understood the value of continually pushing new ideas forward and taking risks—and there was so much trust in the relationship.

Second, it was a huge honor to work with the "Old Céline", which was Phoebe Philo's Céline. We introduced their first e-commerce platform, working with Peter Miles, who is a graphic designer I respect so much. This will only happen maybe once in my career, but the entire site used one typeface, one size and one weight.

I moved to Copenhagen to open Work & Co's new office in April. Currently, I'm deep in a set of initiatives for Ikea. We're reimagining existing retail experiences and launching new ones.

One I'm really excited about that has just begun to roll out, and will continue to globally over the next year, is Work & Co's redesign of the Ikea app. It's a new shopping experience that blends inspiration with commerce.

I will always respect what Google and Arcade Fire did with The Wilderness Downtown years ago. It was so inspiring to see these utilitarian digital tools, Google Earth and Google Maps, used in an unexpected way. From functional to emotional. It gave me the chills.

Roo, which is an A.I.-powered sexual health chatbot for Planned Parenthood. It's a project that some of my colleagues at Work & Co made. I think we all aspire to find ways to use our skills for good, and to make people's lives better. Roo is a very inspiring example of that. Plus, it's a really tangible, smart application of A.I. technology.

Optimism about what is possible.

Perfectionism. While on the one hand it's in our nature to never be satisfied with things, it can also be unhealthy. This is especially true when it comes to digital design, where there's no real end point or ability to feel finished. It's all iterative.

Scotties are instant happiness for me.

That there are not more hours in the day.