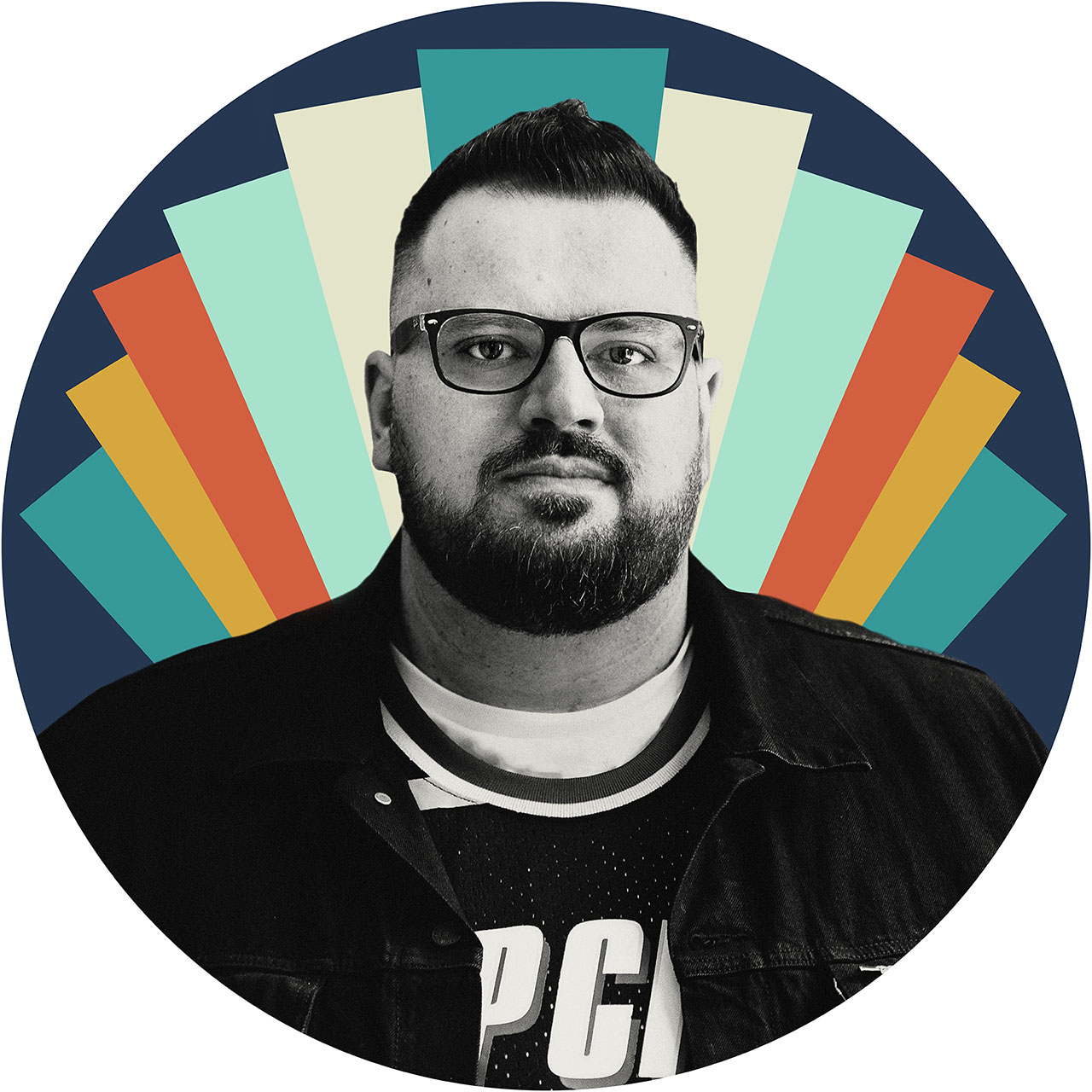 From the recent launch of the Forza Horizon 5 with the record-breaking "How I GO" Hashtag Challenge on TikTok, which garnered over 11 billion views, to the launch of PC Game Pass with the fourth-wall breaking "Game Pass Has PC Games" campaign, Noah's work continues to surprise and delight gaming fans the world over.

His work has won dozens of awards from shows such as the Clios, Clio Entertainment Awards, Shorty's, Promax Games, Game Marketing Awards, One Show and beyond—most notably for Halo 5: Guardian's "Hunt the Truth" audio series and social media campaign, which transformed how Halo fans engaged with marketing.

We spoke with Noah for our Backstory series, where we chat with folks in entertainment marketing about their creative inspirations and more.

I grew up in San Diego, California. I was an artsy indoor kid who had a massive growth spurt that landed me in sports. I loved the camaraderie and competition that went along with being a competitive athlete, but I still wanted to pursue a career in the arts. So as soon as I was able to, I moved myself to L.A. at 18 to attend the Los Angeles Film School and pursue a career in entertainment. After 19 years in L.A., building a career and raising a family, we decided to migrate further north, where we now reside just south of Portland, Oregon.

My first gig out of school was filming and editing a spec reality show presentation that followed Marc "Skippy" Price from the '80s sitcom Family Ties as he attempted to revitalize his career. There wasn't a lot going on, though, so we decided to set him up on some dates to try and get some interesting content. We did and the piece eventually went on to be sold off to E! Network as a show called Star Dates. Never got credit or saw a dollar, but makes for a great story.

But my first job-job was at Moxie Pictures as a production assistant. Helping producers, ordering lunch, working with the Vault to deliver tapes around town. I just wanted to be around production, and coming out of film school my friends and I were making a lot of spec commercials that got us some recognition. I spent a couple of years bouncing around various commercial production companies before I landed at gnet agency just as they were opening in L.A., which was my introduction to the world of gaming.

My career trajectory has been so wildly unconventional that it's hard to point to one specific moment as the breakthrough. It takes a lot of little things going right to end up where you want to be. My guiding principle has always been to follow the fun. If I'm not having fun in the work, then I'm doing something wrong.

For years it seemed like my "jack of all trades" approach actually held me back from more traditional agency opportunities. But after years of trying a bit of everything the industry had to offer, from studying and working as an editor and cinematographer, then learning how to produce, finding my voice as a writer and director, writing and producing music and working as a content creator (before that was even a thing), I found myself chasing more entrepreneurial endeavors where my vast skillset was beneficial and celebrated. Eventually I landed myself in the role of creative lead at Ayzenberg, where all of that training allowed me to suddenly be the glue that that could work seamlessly between departments and disciplines, and I was able to apply all of my unique skills to create some groundbreaking work.

Most notably, the award-winning "Hunt the Truth" audio series and social campaign for Halo 5, which completely changed the trajectory of my career.

Three video games you couldn't do without.

Well, I've been playing Clash Royale on my phone consistently for over five years, which is definitely essential at this point. They've really mastered the pickup and play, quick match arena fun. Less than five minutes in and out and it's always a dynamic and fun experience. Shout out to Monster Soup, the clan I'm in with a bunch of fellow game marketing folks.

Red Dead Redemption 2 is one of my favorite games of all time. I love the outdoors and Old West, and being able to explore the world and scenery is great. Incredible storytelling, acting and game mechanics as well.

And then I'll pick Minecraft as my third. I'm not a massive Minecraft player on my own, but my 7-year-old son is obsessed and knows everything about the game. I've been lucky to work on a number of awesome Minecraft projects over the years as well, and we've spent countless hours over the last few years building and playing together. It's been an incredible bonding experience.

There are so many great characters. It's a bit of a retro answer but I'd have to say Guybrush Threepwood. I was obsessed with the first couple Monkey Island games as a kid. First time I remember getting lost in a game like a book or TV show. Shout out to Ron Gilbert.

Your favorite video game marketing campaign of all time.

I'm a little biased but the Halo franchise and Xbox marketing team have consistently created some of the best game marketing campaigns in the world. I was so inspired by the "Believe" campaign, from the commercials to the diorama. I think that was one of the greatest game campaigns ever made. When I had the opportunity to develop the "Hunt the Truth" campaign for Halo 5, it was a dream come true and still one of the highlights of my career being able to work with Frank O'Connor and Kiki Wolfkill at 343i.

I'm so incredibly proud of our "Game Pass Has PC Games" campaign that we've been working on at Mutiny. We started in my second week on the job, when it was just me and Geordie Larratt-Smith. But massive credit to our clients, Craig McNary and Abhi Shah for believing in us and seeing the potential in what we were building.

Our spot at The Game Awards last year was a huge highlight for me. Being able to work with Dave Burd (aka, Lil Dicky) and GaTa from their hit FX show Dave, as well as collaborating with Dave and Tony on the script. Having Dave critique my rap in the spot. Plus, the fourth-wall-breaking moment where we had GaTa simultaneously leak a bunch of games to Twitter as it happened in the spot. Just so much fun all around.

I've got sort of an offbeat sense of humor naturally, so I really enjoyed the "Transcend Humanity" campaign for HP Omen by Wieden+Kennedy. Obviously one of the greatest shops in the world as well that consistently puts out incredible work.

I absolutely loved the Valorant "Year One Anthem" video directed by Carl Addy at The Mill. It was just such a wonderful celebration of the fans and so audacious in its approach, really captured the vibrancy of the game and community.

Also, that new Amazon Books spot "That Reading Feeling Awaits" from Droga5 London is ace. Such great used of mixed media, and again, just visualized the experience of getting lost in a story beautifully.

One thing about how video game marketing is evolving that you're excited about.

I think the most exciting thing about game marketing right now is actually the challenge. Gamers do not like traditional advertising. So that means that not only do we have to be way smarter about the content we make, but the content must be something they want to watch, which is a dream for me as someone who likes making content. You have to be able to take a step back and say, "OK cool, we need to reach this audience in new ways, with content that's built for them, on the channels where they consume, with the talent that they trust. And we must be genuine." It's an incredibly fun and unique challenge and has pushed us to places we never would've gone creatively before.

What would you be doing if you weren't in the gaming world.

I'd like to think I'd just be working in the entertainment industry in general, I don't think there was any way to keep me from pursuing creative endeavors. If had chosen football over film school, though, I'd probably be a retired football player with two busted knees and a couple of concussions. Think I made the right choice.