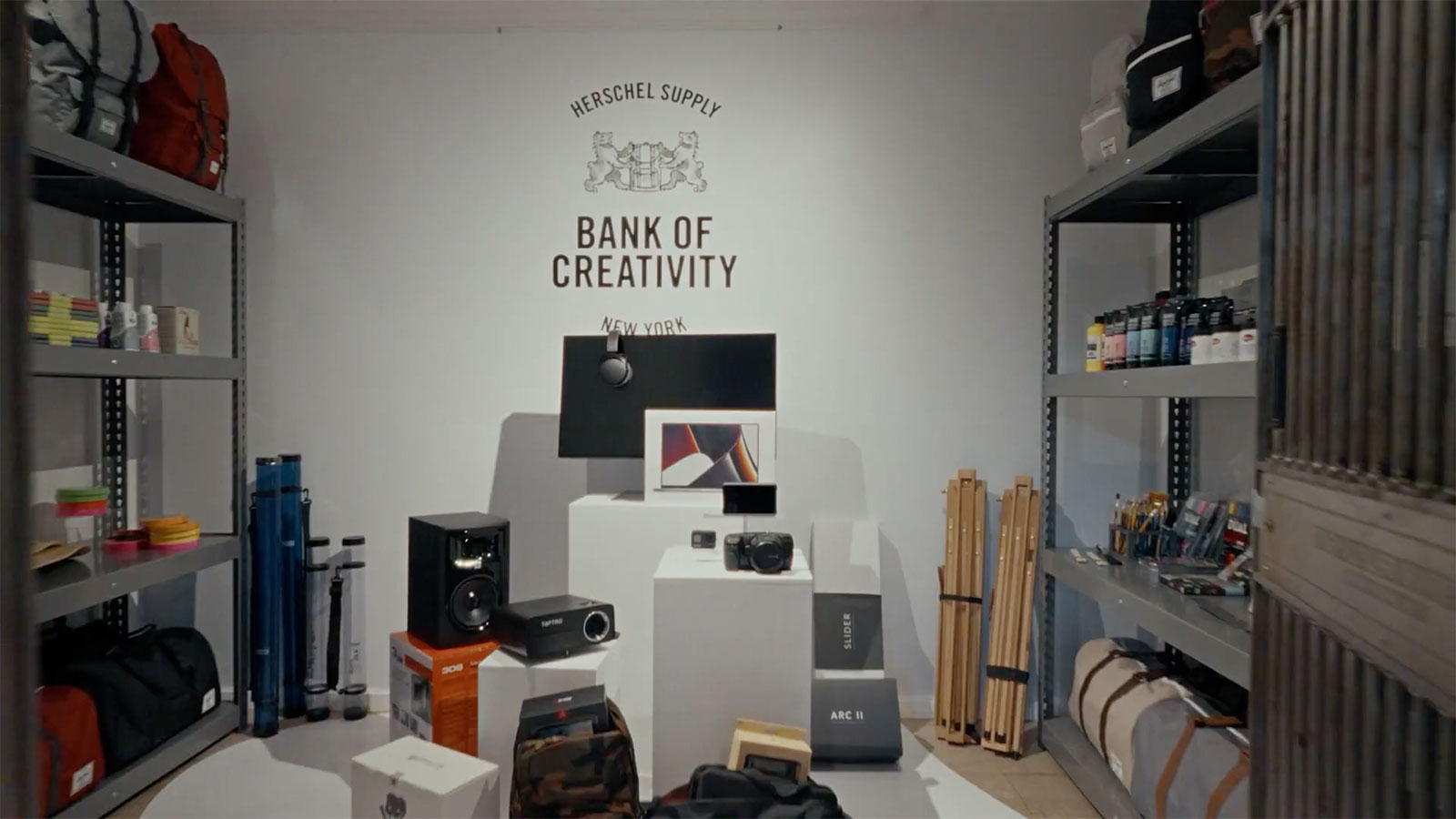 So, you're an up-and-comer pursuing a career in design, photography or some other creative vocation, and you need help making a go of it. You could ask a bank for backing. But why bother? Most financial institutions won't show much interest. They're skittish about funding such endeavors, fearing a weak return on investment—if any.

For the activation, Herschel, a purveyor of retro-backpacks and accessories, worked with Rethink, experiential agency XA, and creative professionals Olivia Rose, Danny Cole and Sophia Wilson. The team took over space at a former bank building in the Bedford-Stuyvesant neighborhood of Brooklyn, inviting 18 artistic hopefuls and entrepreneurs to drop by for mentoring and more.

Ultimately, they walked away better equipped to pursue their passions. Much better equipped. Check out this video to see what happened when the participants toured the vault:

Surprise! After hour-long advising sessions with Rose, Cole or Wilson, each mentee claimed free tools of the trade, ranging from art supplies and digital cameras to computers and peripherals.

It's all geared to drive awareness and build a connection with young pros who fit the brand's demo. To that end, the full-length clip and edits will run across social through the end of September.

Muse: What was your inspiration? Personal experience, perhaps?

Jake Hope: Herschel wanted to truly show up for the next generation of creatives. It wanted to show them that their work is valued and, with a little bit of help, that they have what it takes to turn their side hustle into their main hustle. Flipping the idea of a traditional bank on its head was not only a way of doing that, but it served as a symbol of the struggles many creatives face when they want to take their careers to the next stage.

How'd you hook up with mentors?

Eric Seymour: We selected established pros who could relate to the experiences our creators are going through. All three advisors have managed to put themselves out there and be successful in New York—the most competitive city in the world. Each had their own experiences being denied resources and mentorship.

How'd you pick the mentees?

Eric Seymour: The participants were primarily found through two avenues. The first was an online portal posted to our social media channels, prompting creatives to submit links to their portfolios and a general overview of what they needed to take their creative passions to the next level. The second was through word of mouth. We reached out to local connections and tapped into our advisors' communities to find potential candidates.

In the video, it looks like you gave away a broad range of stuff. Talk about that.

Eric Seymour: Creators were given items that they identified as crucial to pursuing their careers. These included cameras and video gear, laptops, a glass kiln for a jewelry artist, a guitar plus amp and keyboard for a musician, a sewing machine and raw leather for a clothing designer—even a bread oven, cookware set and Vitamix for an aspiring baker. Creators were also given free rein in our vault to fill their backpacks with all the supplies their hearts desired. This included canvases, paints, markers, easels, sketchbooks and film.

What's the boost for Herschel's brand?

Jake Hope: Herschel is a champion of up-and-coming creatives. They've given hundreds of thousands of dollars to arts institutions locally and internationally, and they've supported individual artists through product collaborations right down to activations in their retail stores. Most recently, they launched the Nova Art Project, which is dedicated to supporting female artists via ArtTable's fellowship program and funding projects youth in under-resourced communities.