A Woman in Red Takes Air France to New Heights

In June 2020, Air France's global comms business migrated from Havas-owned BETC (where it had lived since 1999!) to Omnicom. The latter has since created an ad-hoc group called Aura, uniting various expertise under the supervision of TBWA.

Now we get to see what Aura's got under the hood. To help Air France facilitate an "upmarket" move, it's given us "Taking Elegance to New Heights."

Air France has been looking for a satisfying new identity for some time. Before the account moved, one of BETC's last works for it was "France Is in the Air," which accentuated the je ne sais quoi the brand brings to the travel experience.

Plainly put, it was elegance by a different name, but the interpretation varies here. While BETC gave Air France an almost dreamlike identity, and stayed focused on the in-flight universe, Aura's take starts from the ground—literally.

The ad kicks off with a woman in red running through Paris. And though she does eventually ascend into the sky, you never once see a plane.

Focus is held on the train of her dress, which trails behind her for yards. Like Alice in Wonderland's white rabbit, she's in a hurry, and red fabric invites the eye to follow. But instead of diving into a magical hole, she climbs—up the 1,665 steps (!) of the Eiffel Tower, taking a scenic detour through the kitchen of Jules Verne, the restaurant nestled in its heart. En route, she exchanges her shoes for a dessert and finishes the trek barefoot, evoking Cinderella—another woman in a hurry.

Children play in her massive train. A person with binoculars watches in amazement as she continues to climb, her long train braiding through the tower's length. Finally she enters its starry peak, moving through a fog that seems to belong to a different world from the one she left. When she arrives at the highest point, the wind takes her dress and billows it into the sky, like a flag.

The next scene depicts the top of the tower from a distance, breaking clouds and glistening against the night sky. Her train waves like a flag from its tip … and ultimately becomes the accent in Air France's logo. (It also brings to mind the little scarves the company's flight attendants wear.) This is when we see the new tagline: "Elegance is a journey." 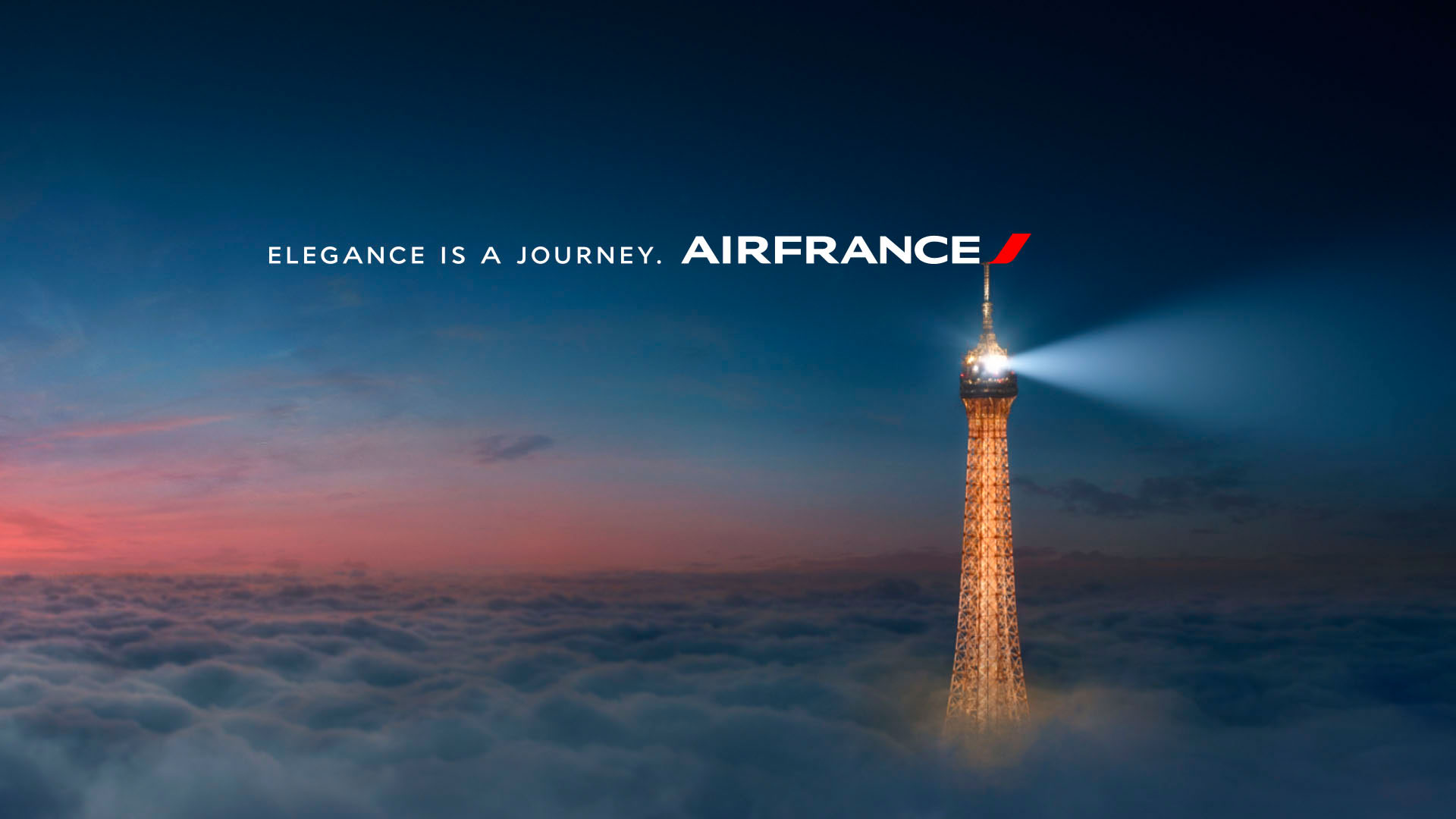 The work still feels very French, but again, what differs here is the interpretation. It's less whimsical than romantic, more like a perfume ad than to BETC's bubblegum-energy work, and less directly about an in-flight experience than an idea of travel.

While a plane is never once visible, there's plenty that symbolizes Air France's unique offerings, according to Aura—"the airline's universal art of hospitality, offer of French haute cuisine on board its flights, and the special attention given to its younger travellers throughout the trip. At the top of the tower, she crosses an imaginary and enchanting sea of clouds, evoking the special timeless moment that can only be experienced on board a plane."

Apart from the white rabbit and Cinderella vibes, there are also deeper stories interwoven in the piece, casting a net across Western mythology and landing in France's own homegrown myths. The train weaves through the city and up the tower like a red thread, as in the Greek legend of the Minotaur: When the hero Theseus has to run through the monster's labyrinth, a princess, Ariadne, gives him a ball of red thread to find his way out. Since then, the adage of "following the red thread" (presumably to your purpose or destiny) has reverberated through Western culture.

France has often used single powerful women to represent different moments in its history: From Sainte Geneviève, the patron of Paris, to Joan of Arc. In one depiction of the French Revolution, "Liberté" is literally depicted as a bare-breasted woman, leading people to freedom. The French Republic is represented by the fictional Marianne, whose name combines Marie—the most popular name among noble girls before the Revolution, illegal for peasants to use—and Anne, the most popular name for peasant girls at that time. The RATP, Paris' public transport service, even has what appears to be a woman's face in its logo (it is also a visual representation of the Seine cutting across the city).

There is also the common phrase "cherchez la femme," or "look for the woman"—which comes from a trope in detective stories about how mysteries can be solved by looking for a femme fatale, or love interest, that might unlock it. Trains are usually seen on wedding dresses; on a red dress (more "femme fatale" than "femme mariée"), the train aligns Aura's protagonist to the lineage of women who are central to the story France tells itself about itself.

This special relationship between France and the woman is worth digging into. England, for example, has long been associated with queens. But Queen Elizabeth I was known as the "Virgin Queen," someone who, in stories, opted to "marry" the country instead of a man. An idea of her chastity is intermingled with her commitment to her role. Since then, English queens haven't been able to shake that association; even if they're married to a person, they're still understood to be subject to the rigid standards imposed on them by the Crown, which makes them less independent entities than living actors in service to the country—a kind of chastity in and of itself.

France's symbolic woman is different. Even when the women are historical, they are mostly legends, ideas about a woman, where what makes them special to the country is something untamed, a driving force and vision.

They lead you somewhere new. They take you on a journey.

"Taking Elegance to New Heights" went live May 11 in the U.S., Canada, Brazil, Italy and Germany on TV and in cinemas. In France, it will appear digitally. The brand thanks the Eiffel Tower Operating Company, and the Paris Region Tourist Board, for its support in making the work.

We can't wait to find out how Aura builds on this new universe.