When fighting for your country overseas, you expect to spend time outdoors under harsh conditions, in a military-issue sleeping bag, dreaming of a cozy bed back home. After returning to these shores, however, veterans shouldn't have to live in parks and alleys, waging personal wars against homelessness. Yet by some estimates, 40,000 vets sleep on the street every night.

To generate awareness of their plight and showcase one solution, Havas Chicago joined with the National Association of Realtors and the Veterans Community Project for an immersive exhibition in Kansas City's Union Station.

The installation, "The Battle Home," measures 240 square feet. Those are also the dimensions of 49 tiny houses built at nearby VCP Village, which offers comprehensive services to help homeless vets. 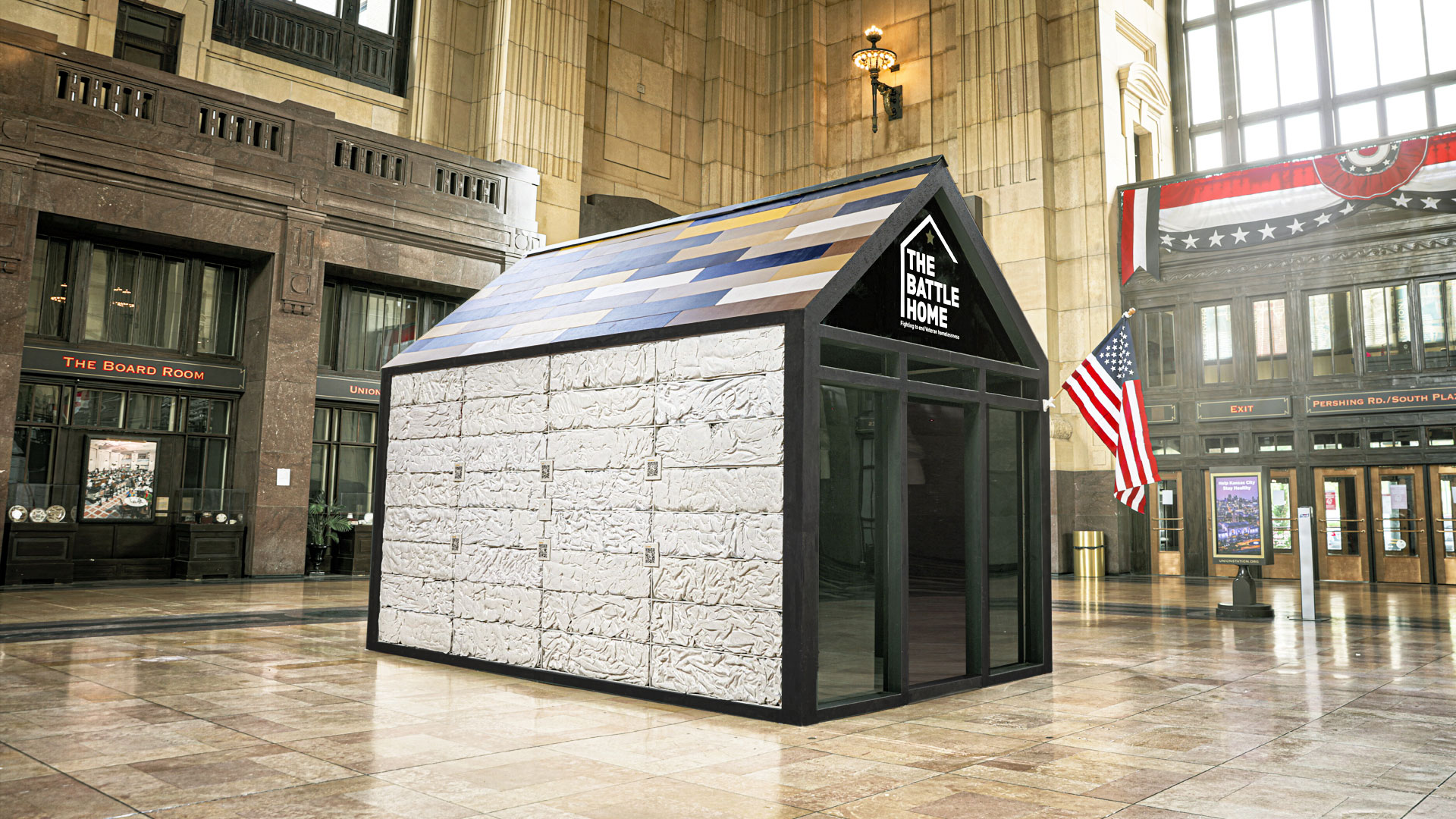 The Battle Home is designed to educate the public about the challenges some ex-military personnel face in civilian life:

• Sleeping bags hardened into bricks form its foundation. These represent the gear soldiers use on patrol and, all too often, on the streets of America once their enlistments are up.
• QR codes on the bricks allow visitors to experience the stories of vets who escaped homelessness thanks to the VCP. That content also lives on the project's website, and we've embedded some of the videos below.
• Military tones form the color palette, sampled from archival photographs and insignia.
• The chevron shape of the structure draws inspiration from VCP's military-ranking-style logo. 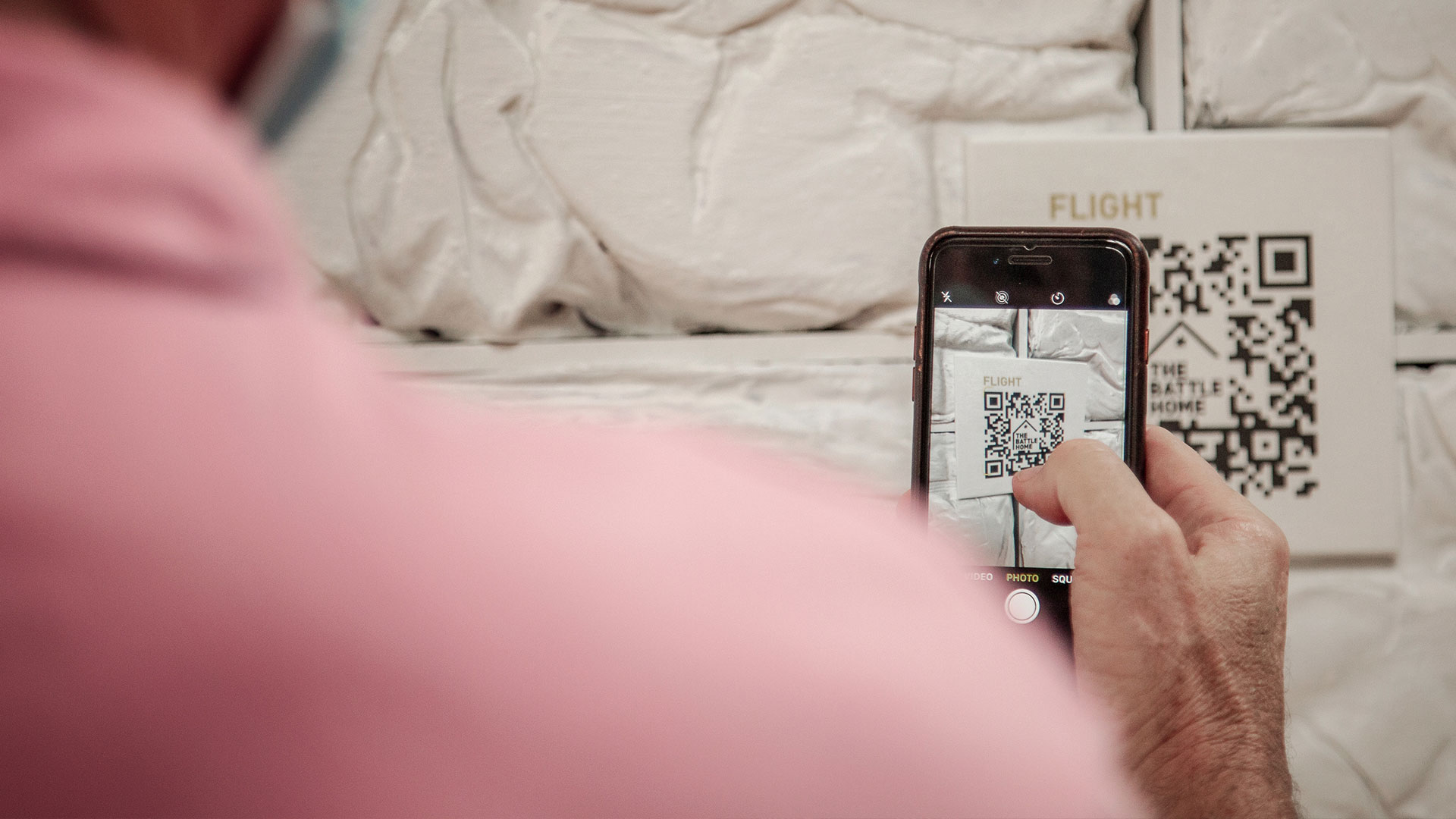 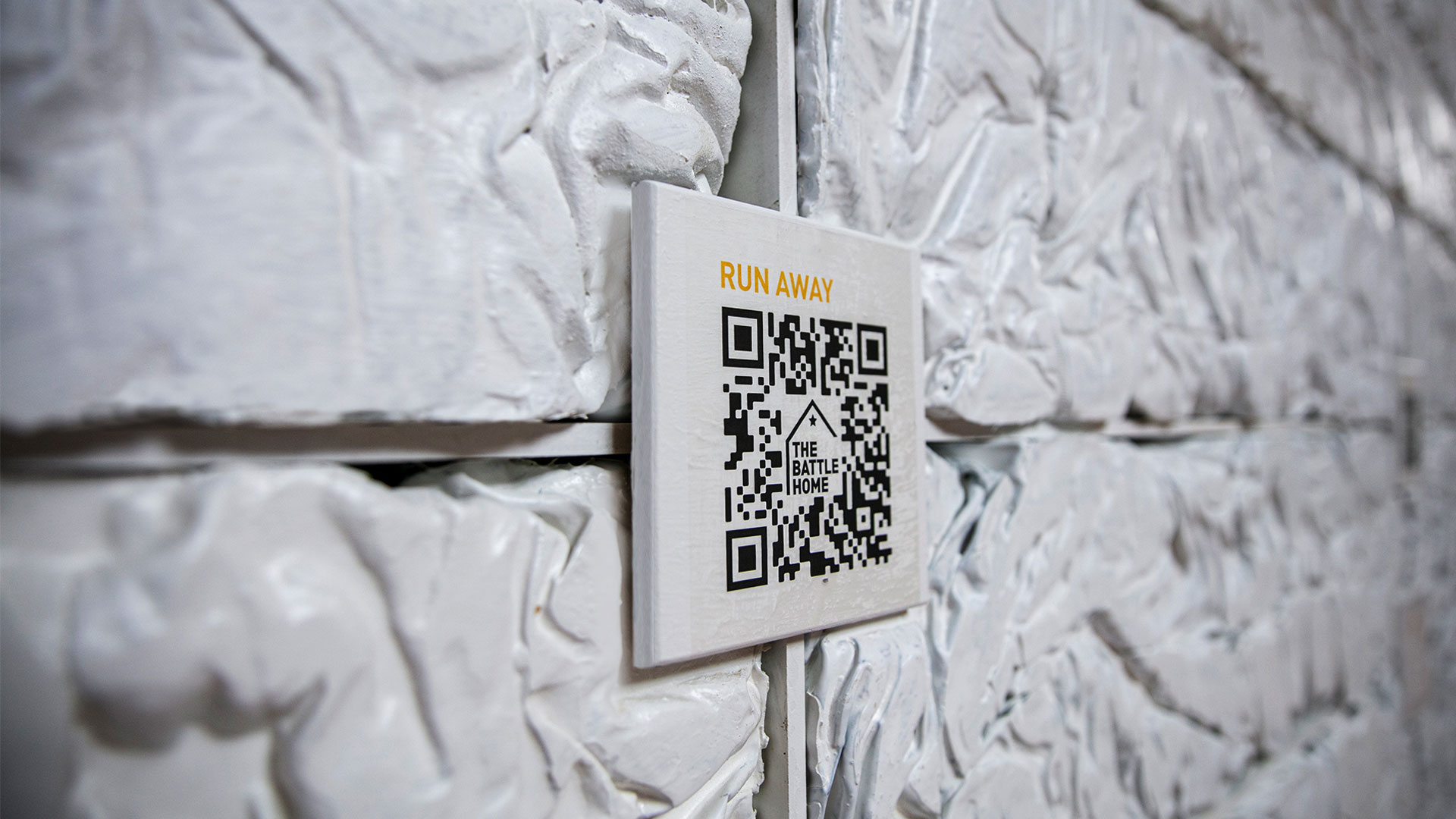 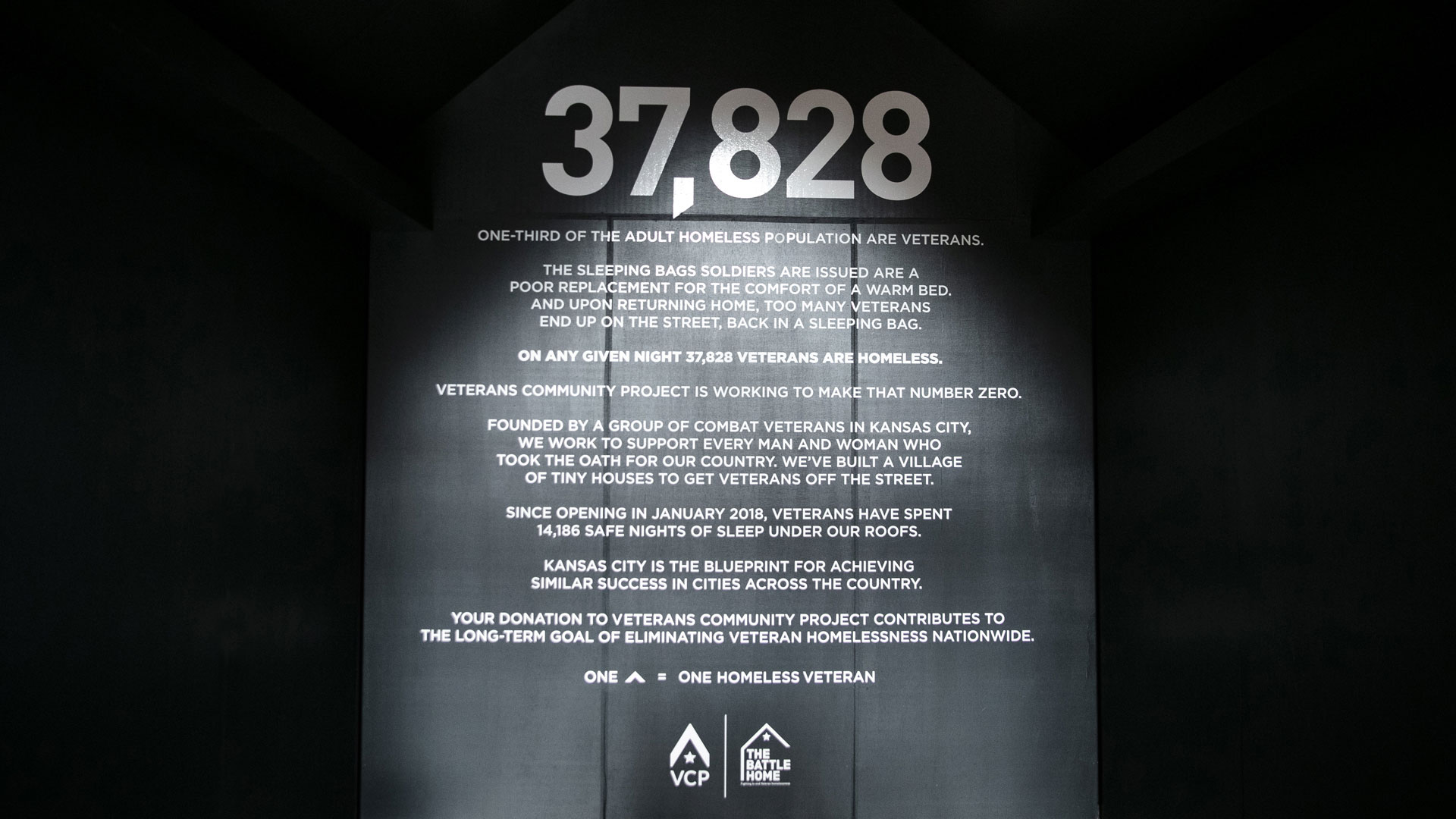 The installation celebrates the efforts of Mark Solomon, a realtor who served in Baghdad as a U.S. Naval Intelligence officer. He co-founded VCP and in 2019 shared NAR's Good Neighbor Award, recognizing members who strive to improve their communities.

A tactile reminder that we often underserve those whose service counts most, the Battle Home will remain at Union Station through Aug. 14, and will tour the nation thereafter.

"We thought the tiny home replica was the perfect canvas to tell the real stories of veterans and help others understand veteran homelessness," Havas Chicago creative chief John Norman tells Muse. "Then, when it came to constructing the home in a way that was meaningful to the veteran experience, we leaned into an insight about sleeping bags. Deployed service members spend a lot of time in sleeping bags. But when they re-enter civilian life, too many of them end up in sleeping bags on the street. To honor VCP for their work, a house that's made of sleeping bag 'bricks' is a beautiful, symbolic representation of the journey that homeless veterans take from their service to the street to finding a home with VCP."

"The biggest challenge was finding the right artist or craftsman to bring our vision for the sleeping bag 'bricks' to life," says Norman. "It had never been done before. There was a lot of trial and error with finding the right approach that communicates a brick, but also allows you to see and feel that it was made out of a sleeping bag. We worked with craftsman Scott Murray, a local fabricator in Kansas City, who rose to the challenge."

"Our team has been working on this idea for a couple months. The build itself took about four days, from start to finish. We had a lot of help from builders and even some veterans who pitched in."

"We held a launch event in Union Station, and we were blown away by the number of people who attended—while social distancing and wearing masks—to hear Mark and the mayor of Kansas City speak about veteran homelessness and the installation," Norman says. "It's an emotional experience—scanning the QR codes on the bricks and watching the films of real-life veterans, while seeing the staggering statistics displayed inside the home."

A message of hope.

"We want people to see and feel hope," he says. "Veteran homelessness is a systemic issue. It's not that veterans can't re-acclimate to civilian life; it's just that they need support. These are people we can help, and VCP has results that prove it. That's what the home symbolizes and what we want people to take away from the experience—there is hope, there is something you can do about it, and the solution is right in front of you. There is an opportunity to donate to VCP as it expands its mission across the country."

"NAR members do more than just sell you home. They live among us in our neighborhoods, and they are trying to make a difference in our communities."